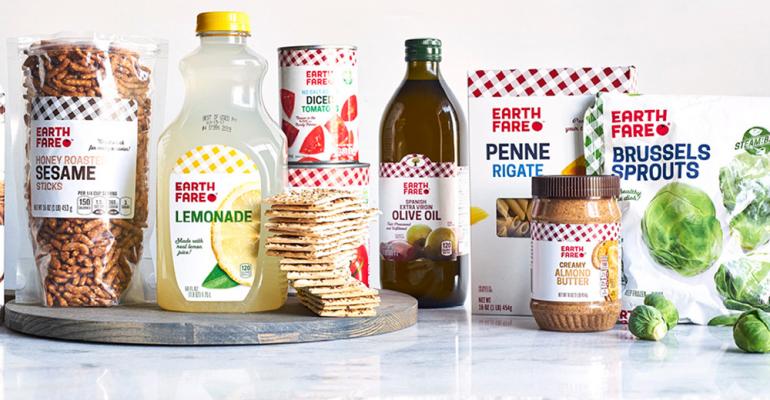 Riced vegetables, apple juice in three distinct varietals and multigrain snack bars made with ancient grains are among the product innovations that will be represented in Earth Fare’s private label line, which recently went GMO-free, President and CEO Frank Scorpiniti said.

Two hundred items will be added to the 500 SKU lineup over the next 90 or so days, said Scorpiniti, adding that these items will either supplement existing national brand equivalents or represent an entirely new and unique category.

The Asheville, N.C.-based retailer with 39 stores spent about two years investigating and securing relationships with non-GMO suppliers to reformulate the portion of its products that contained GMOs, noted Scorpiniti.

“From the onset, our merchant team has benchmarked every product against industry-leading products to ensure delicious, healthy food at an incredible value,” he said. “Our shoppers asked for more non-GMO options, so we updated our entire Earth Fare brand food line to meet their needs.”

Last month, Earth Fare launched the brand messaging “Live Long with Earth Fare,” which was inspired by a Washington Post article about a National Institute of Health study finding that for the first time in 20 years, life expectancy had declined.

“We said, ‘Gee whiz, look at all these ailments and cardiovascular disease and diabetes, a lot of it can be solved or prevented by eating healthier,’ and we were inspired by that,” said Scorpiniti.

The new campaign is an extension of Earth Fare’s food philosophy that “disallows from anywhere in our store any artificial color or sweetener or products that had additional hormones or antibiotics. All fish and seafood are sustainably raised and traceable,” he said. Artificial fats and trans fats, bleached or bromated flour, high-fructose corn syrup, artificial preservatives and artificial colors are also banned at Earth Fare.

“In meeting with our suppliers I hear that we’re the most restrictive retailer in the industry. We define ‘clean’ rather strictly,” Scorpiniti said. “We’re seeing producers clean up their formulations. We’re not the biggest grocer, but we like to think we had a little bit to do with that.”