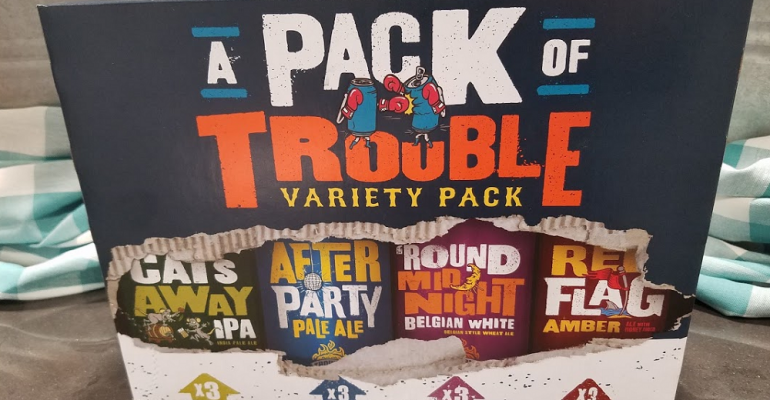 Walmart’s introduction of a stealth private label craft beer line is drawing mixed reviews from drinkers, who generally like the price and don’t mind the taste, but harbor some reservations about its authenticity.

Four canned varieties under the Trouble Brewing label — Cat’s Away India Pale Ale; After Party Pale Ale; Round Midnight Belgian White; and Red Flag Amber — were introduced at Walmart last year. They are available in six-packs and a variety 12-pack, which retail at price points generally closer to that of mass premium beers than their craft competitors (retail prices vary by region, but photographs of shelf tags showing six-packs priced at a range of $6.86 to $7.96, and 12-packs between $12 and $14).

The beers are manufactured for Walmart exclusively by Novato, Calif.-based private label manufacturer World Brews, and brewed in New York’s Genesee brewery. The packaging does not include any reference to Walmart.

A survey of 113 craft beer drinkers asked to purchase and sample the beers by Field Agent earlier this month revealed that 40% of them said the line was either “extremely appealing” or “very appealing.” Only 12% of the testers knew Trouble Brewing was a Walmart private label before the test; however, Field Agent told half of the testers the beer was Walmart’s private label and kept that information from the other half.

Reviewers who identified themselves primarily as drinkers of a particular style of beer were generally harsher critics of those styles in Field Agent’s survey, with more rating Trouble’s products “poor” in that style than the group overall. In the case of the Belgian White style, however, they were also more enthusiastic fans, with more drinkers of that style rating the beers highly than the overall group.

Cory Nelson, media relations manager at Field Agent, in an interview with SN said the survey, revealed some trepidation among craft beer enthusiasts to embrace the idea of a mass retailer elbowing in on the “indy, DIY culture” that defines the category, but noted despite that the Trouble line tested well.

That could help Walmart succeed even if the line itself doesn’t catch on, he noted.

“Some of the comments we received said this could be a ‘gateway’ product that could convert Budweiser drinkers to the craft category and the higher-priced selections that Walmart also carries there,” Nelson said.

A sampling of craft-beer reviewers elsewhere on the internet indicate the beers are facing tougher critics. BeerAdvocate.com reviews of Cat’s Eye and After Party indicate those beers are “okay.” The Rate Beer website which provides rankings relative to all beers ranks the Trouble varieties from the 12th percentile (Red Flag) to as high as the 18th (Cat’s Away).