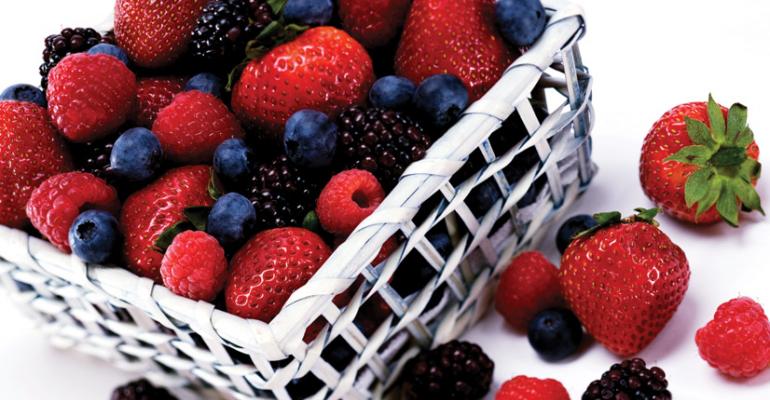 Shoppers are hungry for berries &mdash; in packs large and small &mdash;&nbsp; and category growth shows no sign of stopping.

It’s all unicorns and rainbows for the berry category. Improvements in production have made for more product availability and a longer season, and sales just keep climbing.

“I don’t think there’s been a single commodity out there in the case, at least that I can think of, that’s been on a meteoric rise that these categories have been [on]. It’s been going on for 30 years,” said Steve Wright, produce director at Tops Friendly Markets.

Berries enjoyed a 11.2% sales increase over the 52 weeks ending Feb. 23, and a 6.6% volume increase, according to the Nielsen Perishables Group.

“Every one of the individual categories whether it be strawberries, blackberries, blueberries or raspberries, it’s all been double-digit sales increases. So it’s a very strong part of the program,” said Wright about sales at Tops.

Awareness of berries’ health benefits, their sweet flavor and eating ease all contribute to the category’s success with shoppers.

“They sort of pass that dashboard test where you can eat them in your car,” said Dawn E. Gray, president of Dawn Gray Global Consulting, Vancouver, British Columbia.

The category appeals to retailers because of the high profit per square inch, Gray said.

“The global availability allows them as a retailer to devote the square footage to it, and it keeps returning the money for them.”

While producers have been working to develop different berry varieties to improve shelf life and taste, they’ve managed to keep a straightforward marketing message to consumers of just “Eat Berries,” Gray pointed out.

In addition to great sales at supermarkets, berries are popping up more on foodservice menus, especially fast casual and quick service restaurants that are striving for a healthier reputation, Gray noted.

Raspberries and blackberries, though only 1.1% and 0.7% of department sales, have seen dollar sales gains of nearly 23% this year, Nielsen found.

“I think the biggest part of blackberries and raspberries is the production continues to increase. It’s not like they are just trying to shove production into the existing marketing window. That marketing window has really expanded,” said Steve Lutz, executive vice president at the Nielsen Perishables Group.

“The blackberry industry in Mexico is producing really outstanding quality blackberries and you go back five years ago and that business was very small.”

Berries are favorites of the “Top Fresh Consumer,” those who lead fresh category purchases, according to the Fresh Perspective, the Nielsen Perishables Group newsletter. Berries sit on the top ten list of categories most popular with these shoppers.

“The Top Fresh Consumer tends to be more affluent, better educated, certainly more likely to be in a suburban location as opposed to an urban core,” said Lutz.

Because these consumers are more affluent, their first concern isn’t price, Lutz said.

But it’s not just these Top Fresh Consumers who are purchasing berries, especially blueberries and  strawberries.

“At some point in the year you get a significant 60-plus, 70-plus [percent] of households that are buying these products. The question is, who are your high volume shoppers? Who are the people who are really picking up the category, and that’s who those top fresh consumers are,” said Lutz.

In addition to being affluent and educated, heavy strawberry buyers are often older consumers or those with families, according to Chris Christian, the California Strawberry Commission’s vice president of marketing.

Average households buy strawberries seven to eight times a year, and the heaviest buyers buy strawberries every other week, Christian said, noting there has been an increase in heavy buyers over the past three years.

In fact, the commission found that consumers are eating twice the amount of strawberries as 20 years ago.*

“We’re seeing a shift from kind of medium buyers into the heavy and super heavy buyer categories. And that’s driven both by purchasing frequency and the buying rate — how much people are buying,” said Christian.

Produce departments have moved from selling 4.4-ounce containers of blackberries and blueberries “to where we are selling 2 pounds of the stuff, 18 ounces, 12-ounce containers,” he said.

“We haven’t even really begun to tap the demand that the consumer has. It tastes good. It’s good for you. It’s a no-lose situation.”

At Tops, strawberries are sold in 1- and 2-pound containers as well as some 3- and 4-pound packs. Blackberries come in 6-ounce and 12-ounce containers.

“So things that have typically been utilized by club stores are now being used for mainstream retailers,” said Wright.

For strawberries overall, the pack size offerings at retail haven’t changed a lot — typically 1- and 2-pound clamshells, according to Christian.

“The larger sizes are increasing in popularity and a lot of that is being driven by the warehouse clubs,” said Christian.

Customers are looking for a variety of pack sizes for different needs, according to Lutz.

“So the trick is for retailers to understand for assortment opportunity to make sure they have the right mix of package sizes in place to really leverage the opportunity that consumers have.

“That if you’re trying to make pie you need at least four cups — five or six never hurts — the idea of buying them in those flat little whatever 1-cup containers, that’s just wrong.

“Anybody selling berries in those tiny little containers is asking you to garnish a salad with them; you know, put one berry next to a piece of cheese cake. They’re not really seriously wanting you to eat them.” SN

Sidebar: Pile It On

Some extra merchandising effort can go a long way with berry sales.

Thanks to this pleasing presentation, strawberries made up 15% of entire departmental sales the first two weeks the store was open, according to a company official. And with over 165 produce SKUs at the Orchard Park, N.Y., store, there’s tough competition for fruit and vegetable dollars.

In retailers across the country, strawberries contributed an average of 4.4% to total departmental sales in the 52 weeks ending Feb. 23, according to Nielsen Perishables Group.

“There’s beautiful colors, and you cannot walk by this stand and not buy some. They have the light shining on them, and it’s amazing,” said Gray, president, Dawn Gray Global Consulting, Vancouver.

“If you’re watching what they are doing is taking [the berries] out of the clamshell that they buy it from … and piling them up in these little boxes. And people buy them like crazy. But that’s not something the average retailer can afford to do, but it shows you there’s this incredible appeal.”

*This article has been updated to reflect that strawberry consumption has doubled over 20 years, not 10.