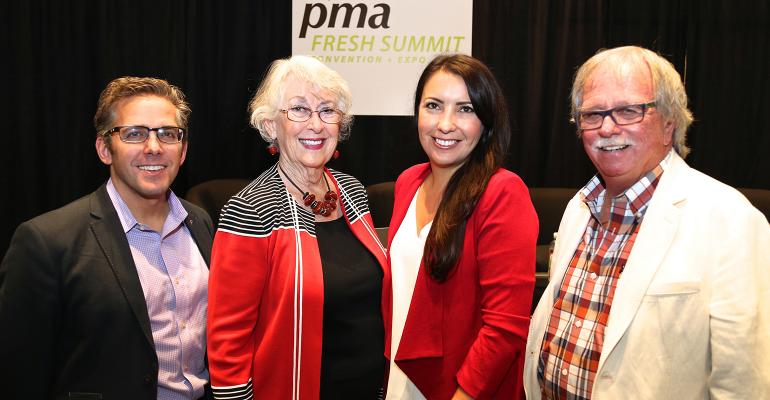 PMA panel looks at what is impacting farms, consumers in 2016

Demographic shifts and data-driven personalization are among the top four trends expected to impact the agriculture and food industries this year, according to panelists at the Produce Marketing Association’s Fresh Summit.

Tucker said Nuffer, Smith, Tucker empanels a group of experts each year and collaborates with the University of California-Davis to create the trends report. “Food Foresight is all about systemically anticipating and laying plans to accelerate opportunities or redirect threats,” he said.

Trends identified in 2015 included the growth in outside investments in agriculture, which totaled about $4.6 billion in past year, as well as the effects of climate change and water shortages and the growth in plant-based proteins.

In California, 71% of the tree-fruit growers and 80% of the raisin and berry growers were unable to find the workers they needed in the past year, Siles said. In North Carolina, the Farm Bureau said 61% of the state’s growers couldn’t find the workers they required. “That’s led to increases in the cost of field labor,” she said, adding that growers are looking at technology as a possible solution. “It’s the tipping point for automation on the farm,” Grant said, adding that could increase quality and consistency in produce.

Genetic editing, such as those provided by the breakthrough CRISPR (which stands for “clustered regularly interspaced short palindromic repeats”) system, has great implications for agriculture, Siles said. Chinese scientists are creating a strain of wheat that’s resistant to fungal disease, and the technology is being test in pigs. She said acceptance would depend on successfully communicating the benefits to the public.

Data is becoming more available with the growing number devices such as Apple watches and FitBits. “Data is really the life blood of intelligent agents,” Siles said. That data can be used in consumer behaviors as well as agriculture. “It’s a spectrum of technologies,” Siles said, ranging from smartphone data-based apps to artificial intelligence. “Consumers are linking their health with their food choices, and technology is changing the way those food choices are made,” she said.

“Massive demographic shifts are happening around the globe,” Siles said, citing the rapidly aging wealthy countries to developing African nations. Those shifts will impact the global food and agriculture markets in both the short- and long-term. The globe’s population is expected to expand to 9.7 billion by 2050, she said, lengthening lifespans will also impact both the number of workers in some areas and the number of consumers in others.

Data personalization may be what affects retailers most immediately, said Grant of ShopWell.

“The typical retail store has 40,000 items,” he said. “They are very carefully curated, and a lot of time is spent thinking about the planogram and how it’s going to look. But you can only build one planogram per store. When you go online, you can create one planogram per person.”

“The ability to promote products immediately, based on availability or price, and personalized to the individual plays really strongly to e-commerce players and I think is an Achilles’ heel for the brick-and-mortar players, who are playing catch-up,” Grant said.