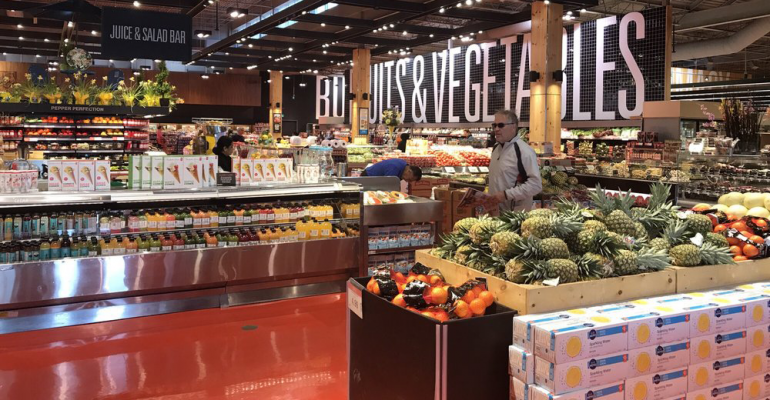 Loblaw Cos. is stepping up its support of the Canadian farmer.

Canada’s largest supermarket company said Wednesday that it plans to spend $150 million more annually with the nation’s farmers by 2025 to buy local fresh produce that typically would have been imported from international sellers and producers.

To that end, Loblaw aims to work directly with local farmers to foster innovative growing methods and plant nontraditional crops. The company said this will help extend the growing season and bring the "Grown in Canada" label to traditionally imported fruit and vegetables.

"For decades, we have worked with local farmers to feed our national appetite for Canadian-grown food. We are applying new resources to accelerate that work, helping Canadian farmers find new opportunities to provide global products and year-round freshness, grown right here at home,” said Chairman and CEO Galen Weston.

Loblaw said it works with about 300 Canadian growers and sources more domestic produce than any other Canadian grocer. In season, almost half of all produce in Loblaw’s retail store banners — including Loblaws, Zehrs, Real Canadian Superstore and No Frills, among others — is domestically grown, the company reported.

Because of Canada’s short growing season and climate, grocery shoppers are used to eating produce sourced from foreign growers, and these products often are picked before their prime and then trucked thousands of kilometers, according to Loblaw. In turn, Canadian farmers have focused mainly on a set range of crops, given that the country’s growing season normally lasts just a few months.

Loblaw said that, in recent years, it has worked with Canadian farmers to grow a wider variety of products, including multicultural items not usually grown in Canada. These initiatives have meant that customers can now find bok choy, long eggplant, methi leaf, napa cabbage and okra — crops traditionally grown in Mexico, the Dominican Republic and Central America — with “Grown in Ontario” and “Grown in Quebec” labels, the retailer noted.

To help lengthen the growing season, Loblaw has teamed up with Canadian indoor farmers and greenhouses to bolster the supply of fresh produce that would otherwise be out-of-season or imported from warmer climates for a lot of the year. The company said that, through its President's Choice brand, it has built relationships with various greenhouse operations to source Canadian-grown berries from January to December.

"This effort is a large and logical extension of commitments we've been making for decades," Frank Pagliaro, vice president of national produce and floral procurement, said in regard to Loblaw’s heightened investment in domestic growers.

Another example of Loblaw’s efforts to promote local sourcing involves a pilot in Newfoundland. In that province, fresh produce often travels long distances to get to store shelves. But a new program has ushered in a vertical farm operation that the company said brings “unprecedented” fresh greens to the area.

"We're investing in Canadian innovation, supporting local farmers, extending shelf life to offer fresher goods, serving new tastes, and helping the environment by reducing food waste and the carbon footprint generated by international shipments,” Pagliaro added. “And our customers love every one of these details."

Overall, the Loblaw Cos. retail network encompasses more than 1,050 supermarkets ranging from discount to specialty formats as well as about 1,400 Shoppers Drug Mart and Pharmaprix drug stores.