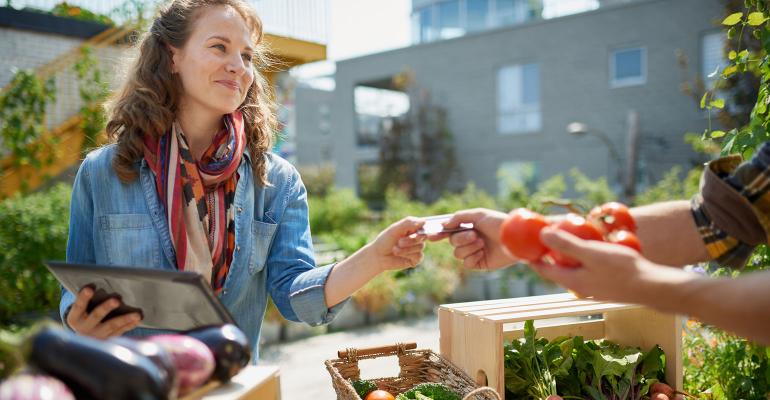 julief514/iStock/Thinkstock
Eight percent of Millennials prefer to shop for produce at farmers' markets, according to the study.
Product Categories>Produce & Floral

Millennials are more likely than older shoppers to buy produce in channels other than the traditional supermarket, according to the newly released Power of Produce 2017 report from Food Marketing Institute.

Nearly a quarter — 23% — of Millennials cite supercenters as their primary channel for buying produce, compared with 12% of Baby Boomers who prefer supercenters for their fresh fruits and vegetables. Only 59% of Millennials said traditional supermarkets were their preferred channel for produce, compared with 66% of Baby Boomers.

Millennials are also slightly more likely to shop organic/specialty retailers for produce, and 8% of this age group said they prefer farmers’ markets versus 5% of Baby Boomers.

“The Millennial attraction to formats outside of the supermarket channel should be a red flag for traditional operators,” the report states.

Millennials are turning to organic/specialty stores and farmers’ markets for their local and organic produce offerings, the report concluded, while they are attracted to the low prices offered by supercenters. They are also significant buyers of organic produce at supercenters.

Among Millennials purchasing organic produce, 59% primarily buy it at supercenters versus 21% at supermarkets, the report found.

“Given the Millennial importance as a driver of category growth, capturing the business of the Millennial organic shopper will be an important key to growth for either channel,” the report stated.

Among the report’s other findings was that while price remains an important factor in produce selection, the appearance of the fruits and vegetables on the shelf is what sways most buyers. The report found that 58% of impulse produce purchases are a result of eye-catching displays.

“Consumers continue to look at ads and price when deciding where they plan to shop, but ultimately, when they are in the store, the eyes decide,” said Rick Stein, VP of fresh foods at FMI. “The final purchase and incremental purchases are based on quality product and eye-catching merchandising.”

Promotions are the second-most-important factor driving produce impulse purchases, cited by 37% of shoppers.

The report also found that the use of paper circulars continues to decline, as more consumers rely on in-store and online communications around deals in the produce department.

“Produce remains well researched, though shoppers increasingly turn to in-store and digital rather than the paper circular,” Anne-Marie Roerink, principal, 210 Analytics, which compiled the report for FMI, told SN. “This is likely going to accelerate in future years, and provides retailers with an opportunity to leverage digital and connect on information, recipes, etc. — moving the message beyond price alone.”

The report found that while 71% of older Baby Boomers read a printed circular at home to find produce promotions, only 38% of younger Millennials do so. Millennials are more likely to use some form of digital media, including store app specials and website specials, and to conduct price comparison research via smartphone. However, older consumers are increasingly using digital media as well, the report found.

One way to encourage more produce consumption might be to offer more suggestions about how to use it, the report found. While 50% of shoppers said they tend to buy the same items again and again, 83% said they are open to suggestions for trying different items.

Another opportunity might be around promoting the nutritional benefits of produce items, said Roerink.

“Produce has always banked on a strong overall health halo, but the study finds that very specific health and nutrition callouts can help items better connect with shoppers,” she said, citing functions such as digestive health and heart health, for example.

Some other key trends from the report:

• Locally grown produce continues to gain popularity, with 54% of shoppers saying they would like to see an expanded assortment of local fruits and vegetables.

• Demand for value-added produce also continues to increase. “Shoppers are certainly wanting to include produce into more food occasions, particularly snacking, but it has to be convenient — both shopping and consumption,” said Roerink.

• Branding in the produce department is gaining traction. Almost half — 49% — of fresh produce was branded in 2016, compared with 38% in 2011. Brands are seen as being fresher, higher quality and more consistent, the report found.

The report outlined the potential that supermarkets have for driving increased sales of produce and maintaining the category’s position as a key driver of overall store success.

“Produce is crucial to the overall health of the store,” said Roerink. “It drives store choice, trips and basket size. But many channels are going after the produce dollar, from farmers markets to dollar stores to vending machines. It’s more important than ever to wow in produce to protect current sales and prompt further growth.”