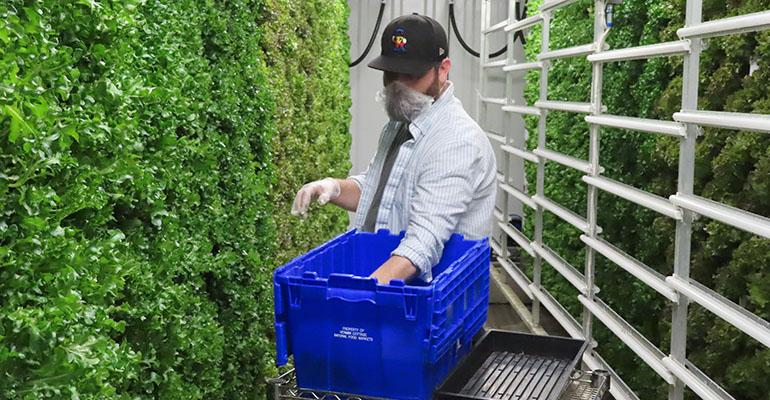 Natural Grocers has joined the hydroponic farming trend, but with a twist: The produce grown inside is certified organic.

Right now, the chain of 162 stores in 20 states has just one GardenBox, as it calls the shipping container that houses the hydroponic farm where it grows several varieties of lettuce.

Mike Boardman, who spent six years as a store manager for Natural Grocers, runs the GardenBox at a Lakewood, Colo., store where the company also has its headquarters. The 320-square-foot GardenBox sits just behind the store, on the southeast side of the building. Boardman says it's 82 steps from the farm to the produce section — but that's because of this store's layout; it will be even closer at other stores.

The idea of the GardenBox came from the top, he said. Kemper Isely, chairman and co-president of Natural Grocers, wanted to try something new, something that was both organic and hyperlocal. The project started in July 2020, and Boardman signed on in October.

Before offering the lettuce for sale in July, Natural Grocers offered 2,100 plants from the GardenBox free to customers in late June. 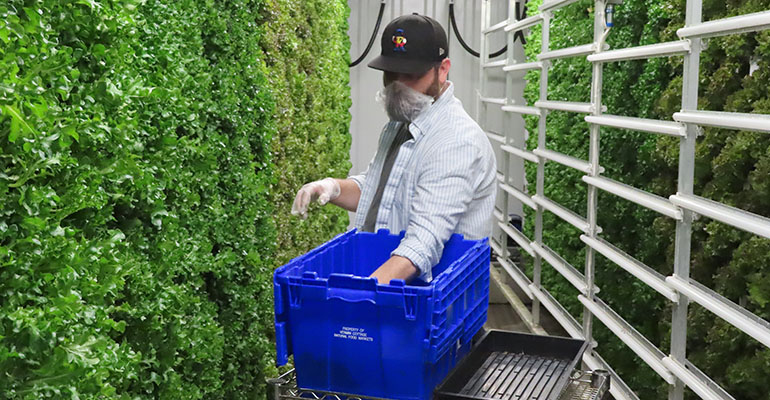 Mike Boardman, who spent six years as a store manager for Natural Grocers, runs the GardenBox at a Lakewood, Colo., store where the company also has its headquarters.

"Customers have been really excited about it," Boardman said. Some have asked if he would teach a class about hydroponic gardening. "People want to know more about it." Even in the store, the lettuce roots are housed in water. If consumers continue to keep them in water, the lettuce could stay fresh for a couple of weeks. The varieties — Hampton, Brentwood, Alkindus, Tropicana, Muir, Marciano and Truchas — aren't commonly found in grocery stores, Boardman said, because they are too fragile to ship. After experimenting with different types, he knew which would grow best in hydroponics. His final choice, though, was personal.

Hydroponic from start to finish

For the structure itself, Natural Grocers contracted with FarmBox Foods, a Sedalia, Colo., company that designs and builds the climate-controlled container farms that opened in 2018. According to its website, FarmBox Foods' closed-watering system uses 3-5 gallons of water per day, yet can produce the same yield as 2-2.5 acres of farmland over a year. The container farms are fully enclosed, protecting the produce from extreme elements. Full-spectrum LED lights provide sunshine-like benefits, while a computer controls the temperature and humidity.

Over the year that Natural Grocers has operated its container farm, metropolitan Denver has experienced extreme heat as well as extreme cold and heavy snowfalls, hailstorms and air polluted with wildfire smoke and ash.

"It's gone through everything," Boardman said of the building. "It's been just fine." From germination to harvest, the lettuce plants spend seven or eight weeks inside the farm. Because lettuce likes cooler weather, the temperature is kept between 65 and 70 degrees. 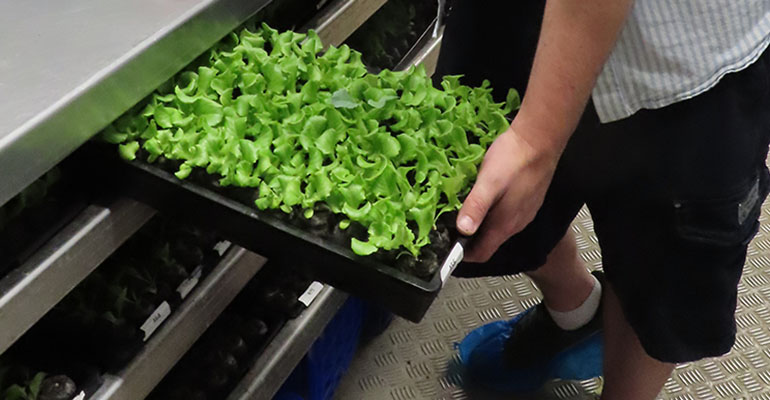 The GardenBox generates about 4,000 stems of lettuce a month, according to Natural Grocers.

Across from the entrance of the GardenBox, stacks of horizontal shelves hold 2,400 seedlings, with the newest on the bottom and those ready to transplant at the top. The USDA Organic seeds germinate in organic-friendly peat and coconut husk until their roots develop, about three weeks. Boardman keeps a log of what is planted on a particular date, then when it is harvested and when it is sold.

"We know exactly," he said.

To the left of the seedling table, three double-sided walls of pipe stand from floor to ceiling. Each plant is inserted into a cup in the pipe, where it will grow for about five weeks. Boardman can move the walls to access each side for planting and harvesting.

At night, the walls are spread out so each plant receives the same amount of light from the LED system between 5 p.m. and 10 a.m. daily.

The liquid nutrients Boardman created — certified organic by Where Food Comes From Organic (WFCFO), recipient of the Clean Hydroponic Produce seal from Alliance for Sustainable Hydroponics — pulse through the pipes for 10 minutes every two hours, he said. The GardenBox generates about 4,000 stems of lettuce a month, according to Natural Grocers.

In the store, Natural Grocers displays the lettuce on a spinner, with signage and brochures to explain the growing and harvesting process. The company also has promoted it with a nearby billboard, on social media and through its loyalty program, said Pamela Lipshitz, director of public relations for Natural Grocers.

The company plans to expand the GardenBox system, first in the Denver suburbs, she said. It likely will grow to include other products, such as herbs, but the company will take it step by step.