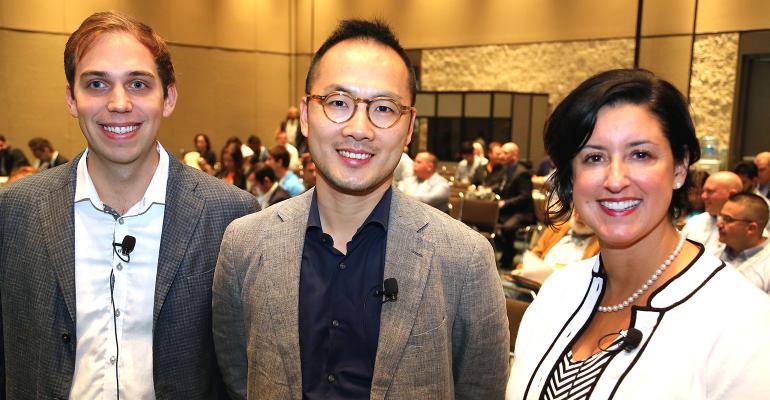 “Consumers are very willing to shop across a variety of channels,” Sherry Frey, SVP at Nielsen Perishables Group said at panel on online produce shopping that included Eric Stone, VP for fresh at FreshDirect, and Loren Zhao, co-founder of Shanghai-based Fruitday.com.

Competition to reach the consumers will intensify in the next few years, Frey added in her presentation at the trade association’s annual convention in Orlando, Fla.

Currently, about 16% of shoppers are buying produce online, Frey said, and that is projected to grow. Areas for opportunity include providing quality produce and a varied assortment, she said.

Online orders also allow the retailers to provide personalized recommendations, especially for those who are seeking to shop for dietary restrictions like gluten-free or vegan, Frey said.

She said Nielsen projects growth in online sales overall to eclipse all other channels in the market. E-commerce now is a $342 billion industry, she said, and it’s growing at between 15% and 20% a year compared with 2% to 4% growth in traditional consumer packaged goods.

“It really is where the growth is,” Frey said, leading many Neilsen clients to forecast 50% of their planned growth will be in the online channel.

Online ordering is being driven by innovations in speed, convenience and product assortment, she said, and existing brick-and-mortar retailers haven taken note and made investments in the space.

Partnerships and acquisitions in the supermarket and technology spaces are blurring the lines in grocery retail, Frey added. She cited recent deals: Upscale Eataly in Chicago partnered with Amazon Prime; Austin-based Whole Foods in February invested in Instacart; and Bentonville, Ark.-based Wal-Mart Stores in August paid $3.3 billion in cash and stock for e-commerce startup Jet.com.

“This will change who we are and the jobs we are doing for consumers,” Frey told the produce growers and retailers.

The No. 1 reason shoppers give for making online orders is the inability to find what they want in the existing brick-and-mortar groceries, Frey said, adding that only 9% of shoppers said online orders are replacing a current routine.

And currently 69% of consumers say they haven’t yet shopped online for food. “There is upside opportunity,” she said. “The penetration of ordering food online is still very low.”

Stone, VP for fresh at online grocer New York-based FreshDirect, which serves the the New York metropolitan area, New Jersey, Connecticut, the Hamptons in summer and the Jersey Shore, said 80% of his company’s customers are women and 70% have a family.

About 28% of orders come through FreshDirect’s mobile app, and that number is climbing, Stone said.

As a cautionary note, Stone said online retailers have to be exceptionally careful in what produce they use to fulfill orders.

“In a brick-and-mortar retailer, when you’re buying cantaloupe or a melon, you pick it up, find the best one you can, bring it home and cut it. You taste it and if it’s not good, you blame yourself,” he said, “because you chose a bad cantaloupe.”

Consumers won’t blame themselves for bad product with online retailers, Stone said. “We’re maniacal about quality,” he said. “If it’s not perfect, you blame us.”

About 95% of those customers order through Fruitday’s mobile app, Zhao said. “Nobody orders through our website anymore,” he noted, and management has created a large team to maintain the mobile app and a much smaller one for the website. “That’s a bit different in the China market than others,” Zhao said.

Among Fruitday’s consumers, about 55% are women and the average is 35, married with children, Zhao.