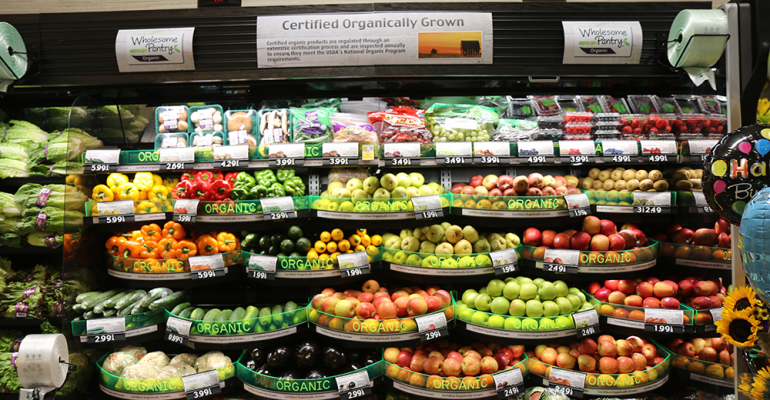 The U.S. market for organic products had a record year in 2018, breaking the $50 billion mark for the first time, according to the Organic Trade Association.

Including food and nonfood items, organic sales rose 6.3% to $52.5 billion last year, the association reported in its 2019 Organic Industry Survey. Record levels were reached for both segments: Sales climbed by 5.9% to $47.9 billion for organic foods and by 10.6% to $4.6 billion for nonfoods.

Organic product sales growth also topped that of the general market, which saw sales rise 2.3% for food and 3.7% for nonfood, the report said.

With 5.7% of food now sold in the United States being organic, this product segment is no longer a niche market, the Organic Trade Association noted. The group said that both food and nonfood organic items can be found in all supermarket aisles, at big-box mass merchants, in warehouse clubs, at convenience stores and at online retailers.

“Organic is now considered mainstream,” Laura Batcha, CEO and executive director of the Organic Trade Association, said in a statement.

Produce remains the largest organic category. In 2018, fruit and vegetables represented 36.3% of all organic food sales. The Organic Trade Association said organic fruit and vegetables accounted for 14.6% of all produce sold in the U.S. last year, and the segment has nearly doubled its market share in the past 10 years.

Sales of organic fruit and vegetables totaled $17.4 billion in 2018, up 5.6% year over year, about the same growth as in 2017, according to the survey. Still, that exceeded growth in the overall fruit and vegetables market, which — including conventional and organic products — saw sales edge up 1.7% last year.

The second-largest organic category, dairy and eggs, had slower growth for 2018, reflecting an overall trend in the U.S. dairy sector amid shifting diet trends, according to the Organic Trade Association. Organic dairy and egg sales inched up 0.8% to $6.5 billion last year. Organic egg sales came in at $858 million, up 9.3% year over year but less than the double-digit growth seen in the first part of this decade, the association said.

Shoppers are turning to organic dairy for products free of antibiotics, synthetic hormones and chemicals, the survey revealed. But in the milk segment, consumers — who once favored skim and lowfat milk — are embracing products high in healthy fats and protein, and many Millennials have also moved away from livestock-based products toward plant-based food and beverages, the Organic Trade Association said, adding that the industry has responded with milk beverages containing higher protein, more full-fat dairy products, new flavors and grass-fed products. 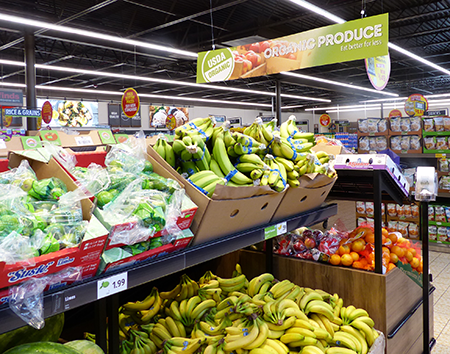 The organic produce section at an Aldi location.

“The attitudes surrounding organic are anything but status quo. In 2018, there was a notable shift in the mindset of those working in organic toward collaboration and activism to move the needle on the role organic can play in sustainability and tackling environmental initiatives,” explained Batcha. “Activism is a natural reaction from an industry that is really close to the consumer. When we are in an environment where government is not moving fast enough, the industry is choosing to move to meet the consumer rather than get stalled.”

That trend is especially evident in the organic nonfood market. The 10.6% year-over-year growth in organic nonfoods surpassed both the 7.4% growth rate achieved by the segment in 2017 and the 3.6% growth rate reported in 2018 for the overall nonfood sector (including conventional and organic items).

According to the report, the biggest growth came from fiber, where sales surged 12.5% to $1.8 billion in 2018. The largest nonfood organic category, fiber represented 40% of the market segment.

Driving growth in organic nonfood products are the same factors pushing consumers to eat organic foods, whether it’s “napkins for their dinner table, food for their pets, lotions they put on their skin or the supplements they ingest,” the Organic Trade Association said. That includes clean labels, reduced chemicals and more supply-chain transparency and sustainability, with the latter being championed by Millennials in particular. The association added that the USDA Organic seal is generating new appeal as shoppers see the certification encompassing such qualities as non-GMO and no toxic pesticides or chemicals, dyes and preservatives.

“Organic is in a unique and tough environment. The government is slowing the advancement of the organic standard, but the positive news is that industry is finding ways to innovate and get closer to the consumer without walking away from the organic program. The sector is innovating yet requiring that federal organic be in place,” according to Batcha. “So whether it’s grass-fed, regenerative or Global Organic Textile Standard-certified, they all have to be organic. The industry is committed to standards and giving consumers what they want.”