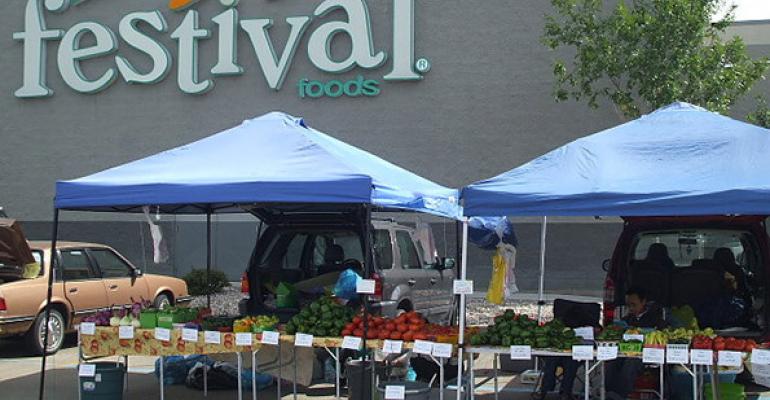 As the public’s taste for everything local has continued strong, supermarkets are expanding their number of grower sources, earmarking more money for local products, adding variety, working more closely with farmers, launching their own CSAs, and ramping up promotion of local produce.

At Festival Foods, Onalaska, Wis., independent farmers’ markets in store parking lots serve to promote local produce, and they’re being expanded to more locations. They attract shoppers who then may finish their shopping in the store, officials said.

“Guests can buy a couple local items at the farmers’ market and then complete the rest of their produce shopping inside,” said Tad Comeau, Festival’s produce director.

“They get a chance to see that inside the store we have great quality local produce at very reasonable prices as well. Hosting a farmers’ market has not hurt our produce sales.”

To increase variety, Kowalski’s Markets, St. Paul, Minn., has worked closely for the last 12 years with one grower.

“We’ve chosen to work a lot with one local grower, who grows what we like for him to,” said Terri Bennis, VP, perishable operations. “As he’s expanded, we’ve expanded, and now, we probably have 20% more variety than we did three years ago, and for the first time, all our herbs will be local.”

Twenty varieties get their debut this month at the grand opening of the chain’s 11th store.

Bennis also said that sign-ups for a CSA (Community Supported Agriculture) group Kowalski’s launched last year nearly doubled this spring at some stores. That’s at $700 a share, $450 a half share for the season.

Meanwhile, Lowes Foods, Winston-Salem, N.C., rolled out the fourth year of its own take on a CSA this spring with its no-subscription-needed program dubbed Carolina Crates. The Carolina Crates, available weekly with a selection of produce from local farmers, are $18. Customers can’t reserve a Crate. It’s first come, first serve, the chain’s website warns.

“We work with four or five farms and we’re trying to get more growers into the mix who can supply us all season,” said Tony Mirack, McCaffrey’s produce director. He said he worked this spring with a newly added grower on planting decisions.

The search for additional growers has accelerated, too, at United Supermarkets, Lubbock, Texas.

“Greenhouses and aquaponics are on the forefront for us right now,” United’s produce director, Joseph Bunting, said. “With controlled atmospheres, they could take us right into December [with fresh produce].”

Money spent by larger retailers like Meijer, Inc., Grand Rapids, Mich., on local products has jumped dramatically. The 219-unit chain has committed a record $100 million to local produce this year.

“Our economic impact has grown from $80 million annually over the past two years,” Meijer public relations manager Christina Fecher told SN. “We offer more than 75 fruits and vegetables from local farmers within the six states where we have stores.”

As they add sources and variety, retailers also are promoting local produce with vigor.

“This season, we’re going up to a whole new level,” Kowalski’s Bennis said. “All new banners and signs, more specific to the product, with pictures of the farmer. We even redid our logo to say, ‘Celebrating local since 1983.’”

“We’re heavily promoting local this year, trying to put as much signage out there as we can. We have a new, colorful banner across the front of the produce department,” said Mirack.