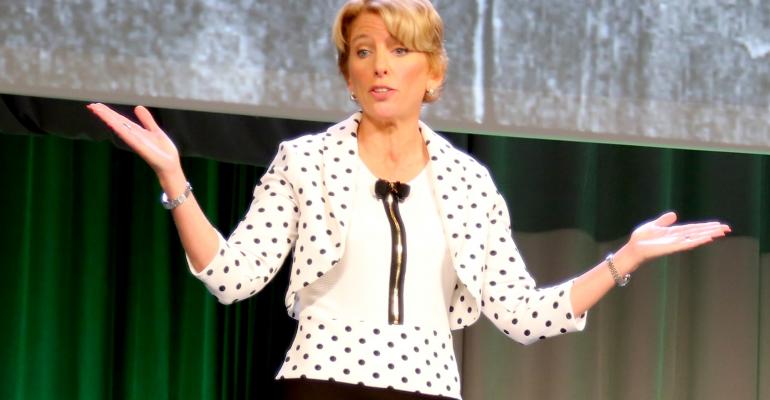 PMA leaders outline 'State of the Industry' at Fresh Summit

Science and technology are leaving a big footprint on the produce industry and how consumers approach its products, the leaders of the Produce Marketing Association told the group’s annual convention Friday.

“Our industry is becoming much more than just farmers,” said Bryan Silbermann, PMA CEO, in giving the “State of the Industry” presentation with Cathy Burns, PMA president, at the trade association’s 67th annual Fresh Summit Convention & Expo in Orlando, Fla. The convention this year drew 20,889 attendees from 65 countries.

Technology from drones to smart refrigerators and spectrometers to genome sequencing is pressing changes on the produce industry, the two PMA executives said. And those technologies have put power into the hands of consumers, they added.

“Access to information has made product quality and transparency actually not just a cost of doing business but a foundational cornerstone,” Burns said, citing Target’s announcement earlier this year that it was fast-tracking food innovation, especially in fresh food, as part of its drive to help consumers learn more about what they eat.

Burns said that Target can now shine a spectrometer onto a product, such as an apple, to identify the molecular composition. With enough data, she added, the spectrometer can tell how old the apple is, its nutrients and its taste nuances.

Target is putting industrial spectrometer scanners in its distribution centers to build a food database, Burns said, adding that the reduced size of the scanners makes them easier to use in the marketplace.

Growers can use genome sequencing on soil samples to proactively test for pathogens before planting, Silbermann added.

While technology is impacting the grower side of the business, it is also providing new tools on the consumer side, Burns said.

Highlights of the past 12 months, she said, include technologically enhanced appliances such as smart refrigerators with cameras, smart ovens and smart lunchboxes with portion control, shopping lists and nutritional contents.

Implications for the produce and grocery industries, Burns said, are that “consumers will be able to better track the use of produce and perhaps be inspired to consume even more.”

Silbermann noted drones in six years are expected to be a $3.6 billion industry, already being tested in foodservice and convenience stores, and robotics are being used in produce growing areas, such as strawberry fields.

At the consumer level, supermarket produce sections are marketing vegetables with technology as well, Burns noted. The stores are leaning on new innovations to help tell the story of some fruits and vegetables, she said.

Japanese stores have created “talkable” vegetables, whereby farmers’ voices are broadcast when consumers touch a corresponding piece of produce, Burns said. And a supermarket in Germany installed a small greenhouse in its produce department to show all stages of plant growth. She said that was a way to take “theater and transparency directly to the consumer.”

A growing cadre of consumers — called “sophisticated weight managers” by The Hartman Group research firm in Bellevue, Wash. — are looking for fresh, local and organic foods without additives and no genetically modified organisms, Burns said.

“Produce markets can reach this audience,” she said, “by focusing on the fresh attributes of their products by offering nutrient-dense, convenient snack solutions and by providing relevant information on how to stay healthy.”

Burns, holding up her wrist to display her own activity tracker, said consumers are already adopting technological tools to help in their health.

“We’re already predisposed to these devices,” Burns said, suggesting supermarkets could partner with FitBit or Apple to incentivize users who reach activity or weight goals with tips or digital coupons.

Silbermann and Burns noted that schools and educational organizations are also effecting what they called “a fresh food revolution” among younger eaters who will be growing into the marketplace.

Burns cited a recent two-year University of Texas study that found the school-based Brighter Bites program, a Houston nonprofit founded in 2012, increased fruit consumption 9% for children and 13% for their parents. The study also found vegetable consumption was up 10% among kids and 6% for parents.

Big Y Foods gets up and running with Fresh & Local Distribution Center
Sep 16, 2020

After a bumpy spring, floral sales are blooming in supermarkets
Sep 04, 2020