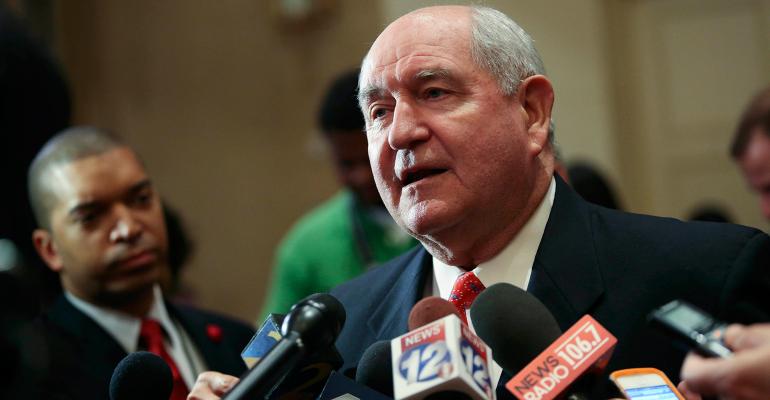 Industry trade associations on Thursday were largely approving of the appointment of Sonny Perdue as U.S. secretary of agriculture, lauding the two-term Georgia governor as a practical leader with a track record of addressing challenges facing agricultural producers and small businesses, and opposing costly regulations.

Perdue, who grew up on farm in rural Georgia and whose cousin, David Purdue, is a Republican senator and one-time CEO of retailer Dollar General, was said to be favored by President-elect Trump’s agricultural advisory committee, which included Perdue among its members.

The secretary of agriculture oversees the $140 billion USDA and its farm programs and can influence a myriad of issues important to food retailers including SNAP and WIC food assistance programs, food safety, country of origin and GMO labeling bills and implementation, and food desert policy, sources said.

“We will look forward to working with him and the team he puts in place on several critical issues for the food retail industry, including food safety and implementation of the Food Safety Modernization Act; implementation of biotech labeling; renewing the Farm bill; the food retailer partnership on the efficient distribution of SNAP and WIC benefits; and reducing food waste,” Hatcher said.

“During his tenure as Governor of Georgia, Mr. Perdue was an advocate for the supermarket industry and business in general,” Ferrara said. “We are confident that he will continue to be a strong advocate for independent supermarket operators as secretary of the department of agriculture.

“NGA looks forward to working with Gov. Perdue and his staff to advance common goals that ultimately help supermarkets serve both rural and urban communities nationwide, including serving the most vulnerable Americans through programs such as SNAP and WIC,” he added. “We look forward to continuing our long standing partnership with USDA and working with incoming officials to identify burdensome regulations and other barriers that make it difficult for independent grocers to grow their businesses and ultimately create jobs in the communities they serve.”

United Fresh Produce Association President and CEO Tom Stenzel said of Perdue: “We have high regards for this past work with our Georgia fruit and vegetable industry, and are confident he will bring a passion and commitment to supporting agriculture, and helping us deliver healthy foods to all Americans.”

United Fresh said it was looking forward to working with Perdue on issues of securing an adequate workforce through immigration reform and a new guest worker program; bolstering free trade; and serving the neediest Americans through federal feeding programs.

Reports that Trump was considering appointing a woman or Latino candidate to the ag secretary position drew strong opposition from his own committee members, who argued the importance of picking the candidate with the strongest understanding of agricultural issues leading into the 2018 Farm Bill.

“America's farmers and ranchers are facing difficult times under current farm conditions, and they deserve a secretary who will work diligently to turn those tides. As we begin working on the next Farm Bill, the secretary will play a vital role in implementing positive changes for our producers and must understand every aspect of the job at hand,” Texas Rep. Michael Conaway, chairman of the House’s Agriculture Committee, said in a statement. “We need someone who is willing to work every day with the mindset of protecting America's farmers and ranchers, especially when it comes to introducing regulatory actions.”