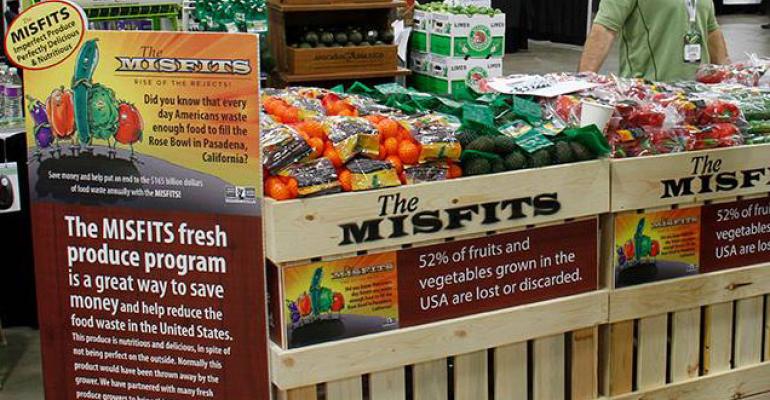 For decades, the produce sold in supermarkets has had to meet strict aesthetic standards. Conventional wisdom held consumers were not interested in buying crooked carrots or undersized apples.

However, a global trend in marketing “ugly” produce as a way to reduce food waste has some U.S. retailers reconsidering the less-than-perfect retail rejects.

“There was this ongoing global trend that was picking up momentum. And quite simply, we here at Giant Eagle just wanted to do our part to be part of it,” Giant Eagle spokesperson Dan Donovan told SN.

Pittsburgh-based Giant Eagle chose to reach out to suppliers directly to find a variety of products that could meet its needs.

“I think it starts with what was available to us. Again, not just available at all but available in the right quantity to be able to sustain what we anticipated customers purchasing for a number of weeks,” said Donovan.

Giant Eagle’s “Produce with Personality” program began in five stores in mid-February with peppers, russet potatoes and oranges. The retailer later traded peppers for apples, which are sourced from a local Pennsylvania supplier. The initial product offerings are among the most popular items in the department, Donovan said.

“From Giant Eagle’s standpoint, we have 86 years’ experience of bringing in only the best of the best from a quality and an aesthetics standpoint. So there was work to be done to identify and work with our supplier community to identify these less aesthetically appealing items,” said Donovan.

“In order to manage the Misfits program we knew that we would need to use a consolidator. We have always had a great relationship with Robison Fresh and knew that together we could launch a successful and meaningful program for our guests,” spokesperson Sarah Pettit said in an email.

The Misfits program started with six products — red and green bell peppers, yellow squash, zucchini, mandarins and navel oranges — and now can include up to 12 items.

Whole Foods pilot on the way

Whole Foods plans to launch a pilot program this month in a handful of stores in Northern California sourced by Imperfect Produce, an Emeryville, Calif.-based business whose main focus is delivering community supported agriculture-style boxes of ugly produce direct to consumers. The company went from an initial customer base of 150 when it launched last August to 2,700 last month.

“So the home delivery model is one way of going straight to consumers, but we also recognize that 98% of grocery shopping happens at the grocery store still,” said founder and CEO Ben Simon.

Further details on the Whole Foods pilot are not yet available, but Imperfect Produce was also the vendor behind an ugly produce program trialed at Raley’s. Though the pilot was ultimately disbanded, Simon said it was successful from a sales perspective. Raley’s saw an incremental increase in overall produce sales during the life of the program.

“And while we found that a small amount of cannibalization did occur, the marginal increase in revenue of the items we were selling more than outweighed that cannibalization, and there was an overall net gain in terms of revenue,” said Simon.

A Raley’s spokesperson said its ugly produce program, called “Real Good Produce,” was a good learning experience, but the retailer chose not to continue working with Imperfect Produce beyond the initial pilot.

“Raley’s committed to a 90-day pilot of our Real Good Produce program. We learned a lot about food waste and customer response to the program. At this time, we are not continuing the program. We experienced some challenges sourcing the product and are reviewing options for the future. We understand the impact our efforts made on increasing the dialogue about food waste,” Raley’s spokesperson Chelsea Minor said in an email.

For his part, Simon said he thought the pilot wasn’t continued due to internal challenges at Raley’s. He said when a retailer starts a small pilot the problem is that there’s too much product for the participating stores to use, not too little.

Communicating to consumers where the produce comes from is vital for retailers selling ugly produce.

“What we’re not doing is we’re not taking food away from our regional food bank partners. So it’s important to clarify that this is not food that would have otherwise been donated. It’s food that would never have entered our store,” said Donovan.

Another key component of the programs is that they often help customers save money. Produce with Personality items carry a savings of 20% or more compared to conventional produce, Donovan said.

The Misfits program began in a handful of corporate-owned stores and now runs in about 40 of the cooperatively owned wholesaler’s member stores.

“We’re loving the program because our guests love buying Misfit produce,” said Art Harding, produce manager at Broulim’s, Driggs, Idaho, one of the participating stores. “I get 2-3 comments a week from people about the program — comments about how they’re glad we’re doing it because they are glad to know that they are not adding waste to the world. Also, our guests know that a rub mark on an apple doesn’t affect the taste. The Misfit produce program has been a win-win for our guests and our store.”

Simon said he expects that realization to be a motivator for more retailers to get involved.