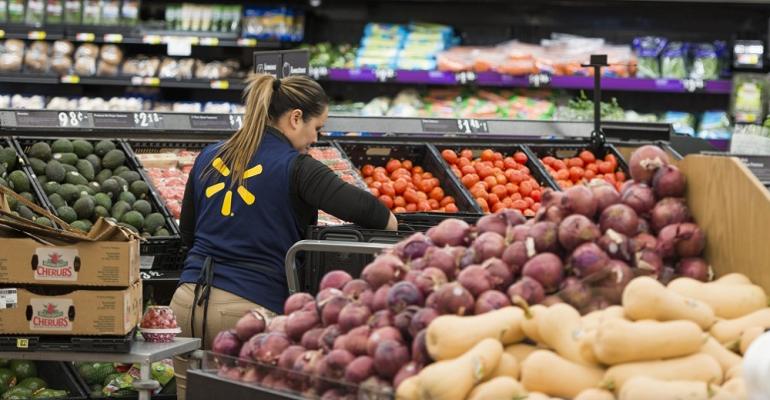 Walmart has found its Eden.

What began as an internal friendly competition, or “hackathon,” among Walmart engineers to improve freshness has grown into a full-scale, company-wide program that was quietly rolled out to 43 grocery distribution centers and other facilities over the past year. In fiscal year 2018 alone, Walmart has eliminated tens of millions of dollars in spoilage and other costs on its way toward eliminating $2 billion in five years. Visual inspection of fresh produce at Walmart’s distribution center is being automated and digitized with the Eden ecosystem. At left is a smartphone screenshot of Eden in action.

“Our goal was to figure out the best way to keep track of food freshness all the way from the farms to our stores,” wrote Parvez Musani, VP of engineering-supply chain technology at Walmart Labs, in a blog announcing Eden. “The winning team determined that building a digital library of food standards was the answer. So they gathered the many chapters of food product specifications set by the USDA, layered on Walmart’s own rigorous product standards, and combined all of this information with more than a million photos to create a freshness algorithm that prioritizes the flow of perishable goods worldwide.”

With the results, Musani, along with Josh Bohling, senior designer of associate experience design, has filed two patents for Walmart. “Eden is now the cornerstone of Walmart’s move to improve the quality of fresh produce for sale to our customers,” wrote Musani.

With Eden’s Freshness Algorithms and other advanced technologies, Walmart now has the ability to:

• Monitor the temperature and freshness of produce and perishable foods from farm to supplier to warehouse to Walmart’s shelves;
• Improve the visual inspections process at distribution centers and human decision-making on quality control and freshness;
• Dynamically route perishables and produce to the nearest store, and prioritize their movement from the back of stores to shelves, to optimize freshness; and
•Capture data and insights at every touchpoint in the supply chain.

According to Musani’s blog, “Eden leverages sophisticated technologies such as machine learning, but we’ve made it simple enough for all of our associates to use. Eden’s suite of apps helps Walmart associates better monitor and care for fresh fruits and vegetables that are waiting to be shipped from distribution centers to stores. That could mean more efficiently ripening bananas, predicting the shelf life of tomatoes while they’re still on the vine, or prioritizing the flow of green grocery items from the back of the store to the shelf.”

In an interview with Supermarket News, Musani also noted the use of Internet of Things (IoT) technology as part of the Eden “ecosystem.” “Eventually with sensors on every pallet, we can determine freshness on a granular level based on factors such as the location of the pallet, climate and so on,” he said. “For instance, two pallets arriving on the same truck on the same day may actually have two different levels of freshness and shelf life. Maybe one of those pallets was in the sun – an hour in the sun can equal one day of shelf life lost.”

Armed with smartphone devices rather than clipboards and binders, Walmart associates in the distribution centers can speed through tasks that used to go slowly and less efficiently – for instance, users can take photos rather than writing things down. “With that database of a million photos – and growing – we can use machine learning to identify good or bad produce,” said Musani.

In addition, every entry into the Eden app adds to the ecosystem’s database and machine learning capability. “Eden is an ecosystem that will continue to grow,” said Musani, noting that new platforms and capabilities can be added as more data is collected. “Our No. 1 goal is getting produce to the stores while shelf life is at its optimum.”

In addition to improving the freshness of its produce selection, Walmart anticipates huge cost savings with Eden. “Our goal is to eliminate $2 billion in waste over the next five years,” noted Musani. “Already, Eden is being used in 43 distribution centers and has prevented $86 million in waste from happening.”