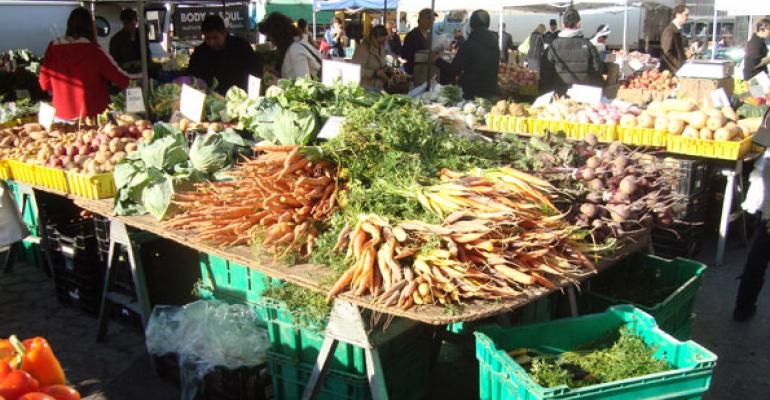 CHICAGO — In a recent study conducted by Mintel, more than half the respondents surveyed (52%) said it’s more important to them to buy local produce than organic options.

Mintel’s Global New Products Database also revealed that product launches of fruit products with a natural/organic claim have declined 58% between 2008 and 2011, while the launch of new vegetable products with that claim have decreased 77% in that same time period.

Price and perception of freshness could both be factors.

In a food service study earlier this year, Mintel concluded that “consumers’ interest in where food comes from and a desire for fresh, unprocessed food will lead more [restaurant] operators to focus on American regionalism.”

However, while all things local might be grabbing more attention lately, the popularity of the category does not appear to have significantly harmed sales of fresh organic produce. The organic fruit and vegetable categories each posted double digit sales gains in the fourth quarter of 2011, according to the most recent FreshFacts on Retail, a quarterly report published by the United Fresh Foundation in partnership with Nielsen Perishables Group.

Dollar sales of organic vegetables rose 11.4%, while volume sales rose 9.6% during the fourth quarter of 2011, compared with the same period a year earlier. All told, fresh organic vegetables accounted for an average of $1,344 per store, per week. The gains were even better for the smaller organic fruits category, which enjoyed dollar sales growth of 23.2% and volume sales growth of 19.2% during the fourth quarter, leading to average sales of $665 per store, per week.

Relatively stable pricing, when compared with conventional produce, may have helped the category. Prices for two of the top four organic items — organic apples and grapes — rose 1.2% and 2.9%, respectively during the fourth quarter of 2011. The price of another item in the top four — organic bananas — fell 0.9% By comparison, prices for conventional apples, grapes and bananas all rose between 4.4% and 6.6%.