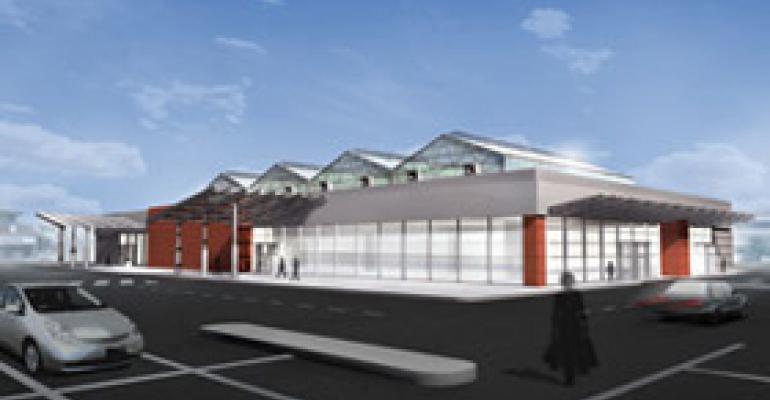 Rooftop Farm to Grow for Grocers

NEW YORK Next spring, Whole Foods Market stores in the New York Metropolitan area including seven in Manhattan will have a new local source of fresh produce: an urban farm that uses hydroponic technology to grow fruits and vegetables year-round in a rooftop greenhouse. The 12,000-square-foot greenhouse is currently under construction on the roof of a one-story church in Jamaica, in the New York borough

NEW YORK — Next spring, Whole Foods Market stores in the New York Metropolitan area — including seven in Manhattan — will have a new local source of fresh produce: an “urban farm” that uses hydroponic technology to grow fruits and vegetables year-round in a rooftop greenhouse.

The 12,000-square-foot greenhouse is currently under construction on the roof of a one-story church in Jamaica, in the New York borough of Queens. It is the brainchild and inaugural project of Gotham Greens here, a designer, builder and operator of urban farms that is part of a small but growing movement to produce food atop stores, schools and other city dwellings.

While hydroponic greenhouses have been built for research purposes at universities and elsewhere — and conventional soil-based greenhouses are not uncommon in urban settings — Gotham Greens believes its $1.4 million facility will be the first commercial-scale hydroponic rooftop farm in the U.S.

After the greenhouse begins operating next year, Gotham Greens expects to grow more than 30 tons of produce annually and sell it directly to local supermarkets and restaurants, as well as to the New York City Terminal Produce Co-operative Market, a wholesale operation based in the Bronx.

Whole Foods is the only future retailer customer named so far by Gotham Greens. “We've had preliminary conversations with other stores and have verbal agreements with produce managers,” said Viraj Puri, one of the founders of Gotham Greens. Whole Foods declined to comment.

Puri said the greenhouse will grow a variety of produce, including lettuce, spinach, tomatoes, basil and parsley, and sell it at “competitive prices.”

The greenhouse will be irrigated by captured rainwater and powered by 2,000 square feet of solar panels located on the rooftop of an adjacent building, which like the church is owned by the Greater Jamaica Development Corp. No fertilizer or pesticide will be needed. By employing hydroponics, the facility replaces soil with nutrient-rich water as the medium in which the produce grows.

“Hydroponics uses a sterile, controlled environment that ensures high quality and freshness without the risk of pathogens like E. coli and salmonella,” said Puri.

The quality of the produce grown at the greenhouse will be enhanced by its “proximity to market,” Puri noted. “After we harvest tomatoes, they will be in stores a few hours later.” Conventionally grown tomatoes, by contrast, “can take up to a week to get to stores.”

Moreover, there will be relatively little handling of the produce. “It will be harvested, packaged and delivered to stores,” he said. “There will be no middlemen or brokers.”

By employing solar energy and capturing waste heat, the greenhouse will approach “carbon neutrality,” Gotham Greens said. Its electrical load will be minimized through the use of natural ventilation, evaporative cooling, and high-efficiency pumps and fans.

Gotham Greens was formed a year ago by several individuals, including Puri, who previously worked for BrightFarm Systems, also based here, another designer of hydroponic rooftop greenhouses that contributed to the design of the Gotham Greens project.

Last year, BrightFarm designed a demonstration-scale hydroponic greenhouse for a new Whole Foods store in Millburn, N.J. The greenhouse, based in a window-facing room inside the store, has grown a variety of herbs — lavender, rosemary, thyme, basil, oregano, cilantro and parsley — that are used in the store's prepared-food department and restaurant, according to Danielle Gould, associate, BrightFarm Systems. The room is also used as an education center.

The herbs are grown in lines of “vertical growing towers” deployed along the window frontage “to make best use of the available light,” said Gould. Whole Foods declined to comment, though it provides information about the store on its website.

BrightFarms is “in discussions” with food retailers about building hydroponic greenhouses above stores, said Gould, declining to identify the retailers. “We are currently working with a number of supermarkets to quantify the opportunity for integrating commercially profitable farms onto their rooftops.”

For supermarkets, which could harness waste heat from refrigeration systems to support a greenhouse operation, growing produce on a rooftop would be the ultimate in local sourcing. “It makes a great deal of sense to locate stores close to the point of production and cut down on transportation,” said Gould. “Most supermarkets are trying to cut their fleet's carbon impact.”

BrightFarms, working on behalf of its parent company New York Sun Works, was also responsible for the design of “The Science Barge,” a barge docked in the Hudson River off Yonkers, N.Y., that features a demonstration of sustainable food production using hydroponics and renewable energy. The barge is supervised by Groundwork Hudson Valley, Yonkers.

An even more ambitious urban farming concept was described last month in The New York Times by Dickson Despommier, professor of health at Columbia University. In an opinion piece titled “A Farm on Every Floor,” Despommier discussed the prospects for a “vertical farm,” a tall building encompassing hydroponic and aeroponic farming activity from top to bottom. He has started a business to build vertical farms.

Despommier is also a proponent of supermarkets starting to grow their own produce on the rooftops of stores. “The supermarket of the future could produce 50% of the produce it sells,” he said. He envisions food retailers building a two- or three-story lightweight plastic structure on top of a store that would support a robust hydroponic produce farming operation. “It would use no pesticides, herbicides or fertilizer, and there would be zero transportation,” he said. “The payback would be incredible.”

The need for this type of farming will increase over the next decades, Despommier said, as the earth's population grows and arable land becomes less available. “If climate change and population growth progress at their current pace, in roughly 50 years farming as we know it will no longer exist,” he wrote in his New York Times piece.