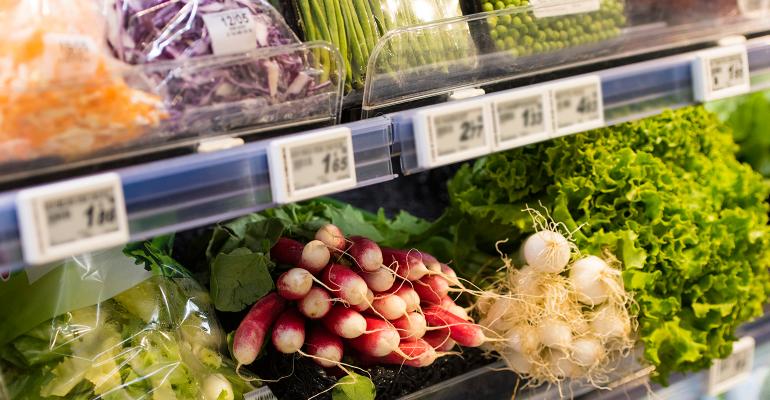 Figures from the U.S. Bureau of Labor Statistics released Friday indicated the Consumer Price Index (CPI) for food at home was -0.8% in April — an improvement from a decrease of 0.9% in March and February’s 1.7% decline. Within the basket, vegetables and fruits both turned inflationary, with the former CPI improving to +1.8% (from -4.1% in March), and the latter accelerating to +1.1% in April vs. -0.5% in March.

The CPI report followed Thursday’s indication that prices at the producer level improved strongly in April. Typically, the lag between rising supermarket input costs and retail prices can pressure profits. Retailers have said they need to be cautious passing along those increases due to competitive pressures.

In a note to clients, RBC Capital analyst Bill Kirk said improvements, and ultimately inflation, in the food-at-home number allow for comparable store sales to accelerate and cost deleverage to ease but may bring short-term gross margin pressure. “We believe we are at the precipice of food inflation, and consider Sprouts, Smart & Final, Kroger and Supervalu most levered to upside,” Kirk said.

Food-away-from-home stayed inflationary during April at +2.4%, the bureau said.

“We expect rising costs will get passed through, albeit with a slight lag … but we do not expect a meaningful decline in margins,” Shane Higgins, a Deutsche Bank analyst, said in a research note. “The market remains rational today and, in the context of a steadily growing economy and reasonable healthy consumer, we view the return of modest inflation as unequivocally positive for the grocers and foodservice distributors.”