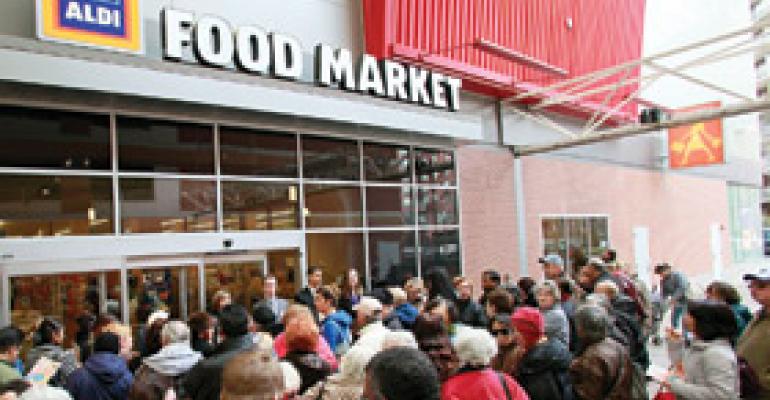 NEW YORK — Aldi has opened its doors in New York City for the first time, introducing its brand of limited-assortment discount to one of the densest markets in the U.S.

“We have very high expectations for this store,” Bruce Pehrson, divisional vice president for Aldi, said at a preview event at the store in the Rego Park section of Queens this month. “We have the opportunity to serve more than 100,000 people within a mile-and-a-half radius. That exceeds our typical demographics by at least three times.”

The store is one of three new stores targeted for the New York metro area during 2011, said Pehrson, who oversees Aldi's Northeast region. Stores in the Bronx and in Bay Shore, N.Y., are also expected to open before year-end, he said, with additional metro area stores, including Brooklyn, on the radar for 2012. Aldi, based in Batavia, Ill., plans around 81 new stores in the U.S. this year.

The new Aldi maintains its standard store floor plan and product assortment, but it includes 14 checkout stands to meet expected volume, vs. five in a typical store.

“How much business we can do here, we hope, is up to how efficient we can make the front end,” said Jason Hart, Aldi's co-president. “We don't have an experience with a store in this dense of a market, but we have huge expectations.”

Hart in an exclusive interview told SN that Aldi's same-store sales growth in 2010 was positive but the company was still feeling the effects of the slow economy.