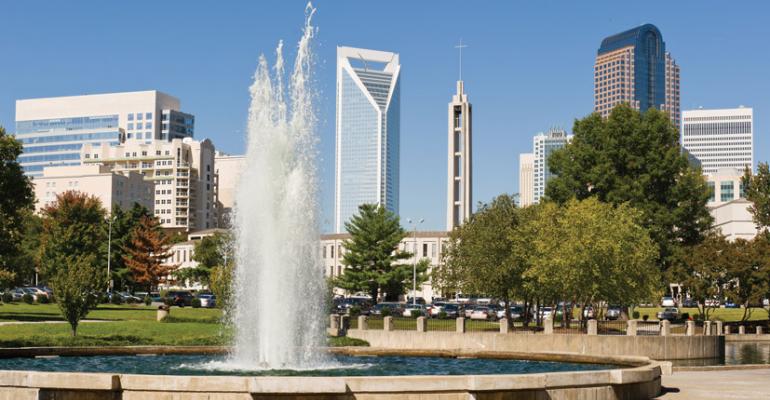 Maybe it is lonely at the top. It was only a few years ago that Harris Teeter ascended to its No. 1 position in the Charlotte market, but this February the company said it is exploring the possibility of selling itself.

With 26% market share and 51 locations in the market — which includes five counties in North Carolina and York County in South Carolina — the publicly owned chain is about seven points ahead of both Wal-Mart Stores and Delhaize America's Food Lion, according to the latest data from Metro Market Studies. 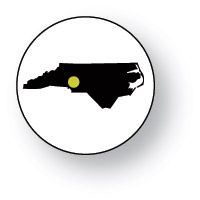 What the data do not show, however, is the looming expansion into the market by Publix Super Markets, the Lakeland, Fla.-based operator that just weeks ago broke ground on its first Charlotte location. Publix entered the region last October with two stores just across the state line in the South Carolina towns of Tega Cay and Indian Land.

Publix and Harris Teeter likely would appeal to a similar customer in the market, analysts and observers said, with Food Lion and Wal-Mart battling for the lower-income customers in the market. Bi-Lo, another traditional operator, also has a presence in the market, with 27 stores and 9.2% share, according to Metro Market Studies.

Harris Teeter bolstered its position in the market last year through a store swap with Lowes Foods, which all but exited the Charlotte area, leaving only five locations.

The battle for share in the market hinges on who — if anyone — emerges to acquire Harris Teeter. 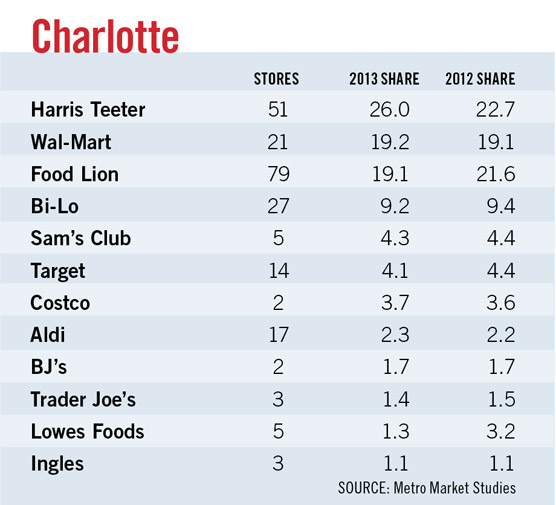 Although the company said private equity had expressed interest in the chain, analysts said strategic buyers could emerge, with the favorite being Ahold.

“Ahold USA does appear to be the most likely bidder, in our view,” she said in a report, based on its history making acquisitions, and its mix of unions and nonunion operations, among other things.

Other food retailers gaining share in the market include Costco, with two locations, and Aldi, with 17. Trader Joe’s, with three stores in Charlotte, has seen its share of the market level off at about 1.4%.

BJ’s and Costco also each have two stores in the Charlotte market, with shares of 1.7% and 3.7%, respectively.

In an interview with SN last year, John Batanides, managing director of Charlotte commercial real estate firm Newmark Grubb Knight Frank, noted that anyone entering Charlotte has to contend with the “hometown favorite.”

“I’m not sure I’d want to go up against Harris Teeter in the Charlotte market,” he said.