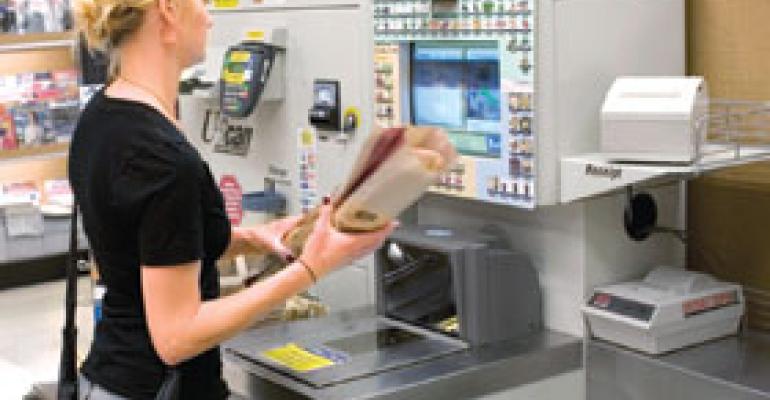 IN THE food-retailing universe, Wal-Mart Supercenters are often cited as the antithesis of convenience big, sprawling boxes of 100,000 square feet or more located on the outskirts of population centers. But the Supercenter is not the only weapon in its arsenal. In addition to the Neighborhood Market banner at an easier-to-shop 40,000 square feet the company has begun testing some even smaller prototypes,

IN THE food-retailing universe, Wal-Mart Supercenters are often cited as the antithesis of convenience — big, sprawling boxes of 100,000 square feet or more located on the outskirts of population centers.

But the Supercenter is not the only weapon in its arsenal. In addition to the Neighborhood Market banner — at an easier-to-shop 40,000 square feet — the company has begun testing some even smaller prototypes, and recently hinted that more stores like the Wal-Mart Marketside format could be on the way.

“In the United States, we have considerable opportunities in major metropolitan markets, with innovative new formats and by making our existing assets more productive,” Michael Duke, chief executive officer, said in Wal-Mart Stores' annual report to shareholders, which was published last month.

Many industry observers took the “innovative new formats” comment as a reference to Marketside by Walmart, a chain of smaller, convenience-oriented stores that debuted in the Phoenix market in 2008. The four stores, measuring about 15,000 square feet each, have a more upscale feel than the chain's supercenters and have a strong focus on prepared and convenience foods.

Some analysts question whether Wal-Mart will seek to expand the concept further — it put expansion of the format on hold last year — but smaller, convenience-oriented formats have now become part of the portfolio of many major food retailers, especially as small, limited-assortment stores like Aldi continue to expand.

Tesco's commitment to the Fresh & Easy Neighborhood Market format, a 15,000-square-foot concept with 159 stores in the Southwestern U.S., illustrates this focus on the convenience-oriented consumer.

Bill Bishop, chairman of Willard Bishop, Barrington, Ill., said increasingly convenience is measured by the ease in which a store may be shopped.

“I think convenience used to be thought of as proximity to home or work, or how easy it is to get in and out of the parking lot,” he told SN. “But today I think convenience is also influenced by the size of the store, and how long it takes to get through the store.”

That can include things like the checkout speed, and ensuring that the product selection is optimized and is in-stock.

Trader Joe's, for example, has a strategy for expediting checkout when lines begin to form, which adds to their convenience, he noted.

“They know how to take care of that, and you don't find that in too many places,” Bishop said.

He also said having self-checkouts — Fresh & Easy uses self-checkouts exclusively, with personnel on hand to assist — is important to imbuing a sense of convenience in the supermarket.

Handheld scanners such as those used by Food Lion's Bloom stores and tested by Ahold's Stop & Shop chain — are another example of checkout technology that seeks to make the shopping trip more convenient, Bishop noted.

The increasing use of online ordering and in-store pickup also adds convenience for shoppers, he pointed out.

Merchandising commonly purchased products like bread and milk near the front of the store is another initiative supermarkets should consider to appeal to what Bishop called the “hit-and-run” shopper.

“Most supermarkets have done a good job putting cold beverages near the front of an end-aisle display, but there are still not that many that do a good job of putting things like bread and milk at the front,” he said. “I'm afraid the philosophy is, ‘Why don't we go ahead and make them walk so they can find more stuff to buy.’ Well, there are a lot of places where you don't have to do that any more.”

Bloom is one banner that has experimented with this type of merchandising, placing fast-moving items near the checkout as part of its emphasis on convenience.

“Repositioning the milk closer to the entrance is a small thing that people may not realize, but it helps the flow of the store,” Allen Frost, director of operations at Bloom South, told SN last year in describing how the banner was continually rethinking its merchandising in terms of maximizing customer convenience.

John Rand, director of retail insights at Management Ventures Inc., part of London-based Kantar Retail, said rethinking merchandising inside the store is one of biggest opportunities for supermarkets to increase their convenience.

“Most retailers understand convenience in the sense of location — they can site their store in an area that can attract enough consumers,” he said.

But where they face challenges are in the Center Store areas, where shoppers are confronted with daunting rows of product and no logical cues about how to navigate them.

“The store is set up to be efficient for the operator, not for the shopper,” he said.

Although many retailers have attempted to conquer this problem with innovative layouts, better signs and improved sightlines, Rand said he has yet to see a satisfactory solution that can be applied to supermarkets on a broad scale.

“I haven't seen anything that made me sit up and say, ‘Now we have a new standard for the industry,’” he said.