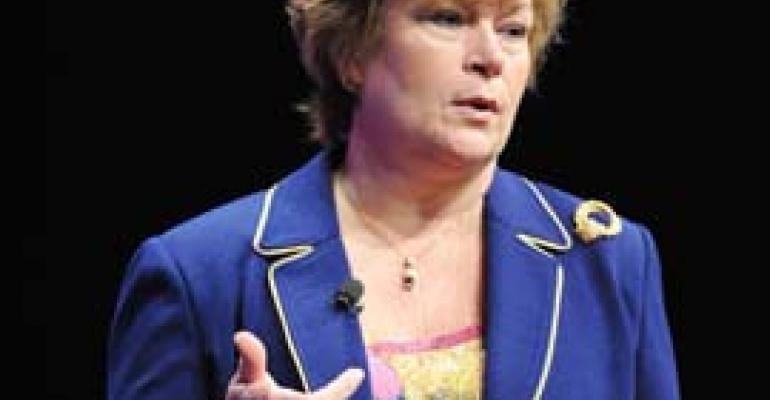 DALLAS &#8212; Supermarket profitability slipped to a new low in 2010 as consumers increasingly focused on bargains and made fewer trips to the store, according to data released at Food Marketing Institute&#8217;s Future Connect conference here last week.

DALLAS — Supermarket profitability slipped to a new low in 2010 as consumers increasingly focused on bargains and made fewer trips to the store, according to data released at Food Marketing Institute’s Future Connect conference here last week.

Median profits before income taxes and extraordinary items fell to 1.57% last year, FMI’s 2011 Speaks survey of retailers found. It was the lowest margin reported in the last 10 years, falling slightly below 2009 levels of 1.62%.

In addition, FMI’s 2011 Trends survey of consumers found that consumers reduced their frequency of grocery shopping trips to 1.69 per week, the lowest in the 62-year history of the survey. About 34% of shoppers only bought groceries once a week, up from 29% a year ago, and those shopping only once every other week increased to 20%, vs. 12% a year ago.

“The fact that the economy tops the Speaks Worry Index for the fourth year in a row shows that it weighs heavily in your thinking, and that is true for your shoppers as well,” said Leslie G. Sarasin, president and chief executive officer, FMI, in a presentation at Future Connect. “The economy has forced nearly all shoppers to cultivate various degrees of belt-tightening strategies.”

Still, customers seem to appreciate their primary supermarket more than ever — overall satisfaction rose to 8.4 on a scale of 1 to 10, and 95% of shoppers said they would recommend their primary store.

“While the economy hasn’t made it easy for anyone, you are doing the right things,” Sarasin said.

The data indicate that shoppers have become more loyal to their primary store, she explained, as many consumers report “bargain-hunting fatigue.”

“The willingness to shop multiple stores dropped significantly in 2010,” Sarasin said, noting that Trends respondents indicated they made fewer trips to convenience stores and drug stores to buy groceries in 2010.

Shoppers spend an average of $97.30 per week on groceries in 2011, more than three-quarters of it at their primary store.

The economic pressures are also intersecting with consumers’ desire to eat healthier, Sarasin explained. Concern about nutrition among shoppers polled fell 5% vs. a year ago, but 4% said their diet has room for improvement.

“I think the stage set [of economic concerns] is overwhelming the actor,” she said.

Among other findings from the surveys, both shoppers and retailers increasingly define “local” sourcing as coming from within state lines, rather than within a certain number of miles.

In addition, consumers see buying local as an important means of supporting local economies, in addition to being a sustainability issue.

“Selling local is a vital means of community involvement and identity,” Sarasin said.

Sustainability, meanwhile, has become a tiebreaker, she explained. Shoppers might not necessarily choose a store based solely on its sustainable practices, but “in a situation where all other factors are equal, a green store will win.”

*Weighted for company size and number of stores operated.