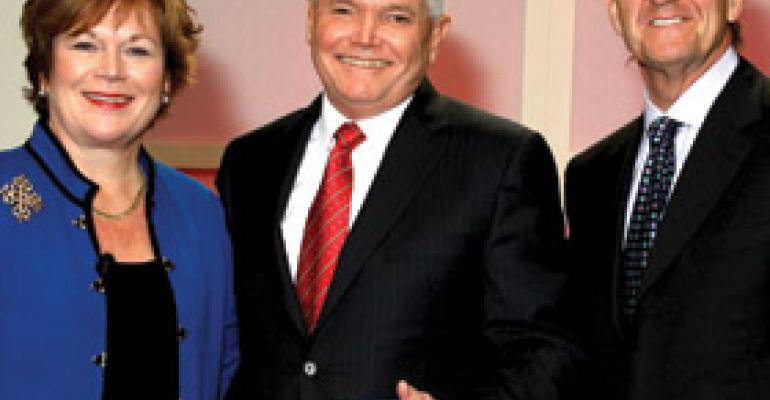 • Susan Mayo, who retired last year as vice president of consumer affairs at Norfolk, Va.-based Farm Fresh Supermarkets, received the 2011 Esther Peterson Consumer Service Award. She began her career at Farm Fresh, a division of Minneapolis-based Supervalu, in 1977, as director of consumer affairs.

• Dean Janeway, president and chief operating officer of Keasbey, N.J.-based Wakefern Food Corp., parent of the ShopRite banner, was given the FMI Herbert Hoover Award for professional excellence in the retail and wholesale industry. He joined Wakefern in 1966 as a junior accountant and has been president and COO since 1995. Janeway is “credited with bringing innovation and creativity to the food-distribution industry,” FMI said.

• Fred Ball, chairman of Balls Food Stores, Kansas City, Kan., received the FMI Sidney R. Rabb Award recognizing service to the community and strong advocacy on behalf of the supermarket industry. He began working at his family's grocery store at age 10 and was named president of the company, which operates 29 Price Chopper and Hen House Markets stores in the Midwest, in the mid-1960s. He was also chairman of Associated Wholesale Grocers for 28 years.

• Arthur B. Drogue, retired senior vice president of customer development for the Americas at Unilever, and Richard G. Wolford, chairman, president and chief executive officer of Del Monte Foods, were presented with the William H. Albers Industry Relations Award. The award recognizes community service and excellence in trading partner relations. Drogue retired from Unilever last year after more than 11 years. Wolford began his career in the food industry at Dole Foods in 1967 and was named president of Dole Packaged Foods in 1982. After working in private equity, he was named CEO of Del Monte Foods in 1997 and chairman in 2000.