/sites/all/themes/penton_subtheme_supermarketnews/images/logos/footer.png
Recent
Recent
Organic? We’ll see what the USDA has to say about that.
Jan 24, 2023
Retailers were eager to be back together at the 21st annual Friends dinner at FMI
Jan 24, 2023
Amazon launches RxPass
Jan 24, 2023
Opposition to Albertsons-Kroger merger continues
Jan 23, 2023
Boxed lands $20 million in funding
Jan 23, 2023
Featured
Podcast: Foodservice at retail ramps up
Jan 26, 2023
5 things: The rotisserie chicken wars
Jan 20, 2023
Kroger and Albertsons merger: What lies ahead?
Dec 13, 2022
Are we on the verge of a new grocery landscape?
Dec 06, 2022
News>Retail & Financial

CHICAGO — IGA here said its retail members are beginning to connect more with their customers through a digital marketing program designed specifically for their needs.

Called IGALink, the program has been available at no cost to all 1,250 IGA retailers in the U.S. since last summer, and what it offers has continued to expand, Jim Walz, IGA’s vice president, marketing, branding and business development, told SN.

The purpose of the program, he explained, is “to connect IGA retailers with shoppers. We’re working together on a common digital platform so we can link all our members with each other and with consumers to build the IGA brand.

“It’s a way for our retailers to work together and yet maintain their individual identities.”

IGALink uses a locator button at the alliance’s longtime web address, IGA.com, to connect to retailer-specific websites they can utilize either in a generic form or one they can customize with their own content, said Walz (left).

IGA likes using the IGA.com address as the starting point for consumers, he explained, “because the address itself is an asset with a lot of advantages and power because it spells itself out, which makes it very simple to remember.”

The feedback from retailers has been positive, Walz said. “They really like what we’re doing, particularly the branding messages we offer and the flexibility to personalize the site for their store and their community.”

According to Heidi Huff, manager of marketing and retail programs, what isn’t clear yet is what impact the website is having on sales.

“We haven’t been tracking the number of hits,” she said. “However, some members who have had websites for a while say the sites are having a positive impact, based on their experience with web-based coupons, which they say drive extra traffic.” 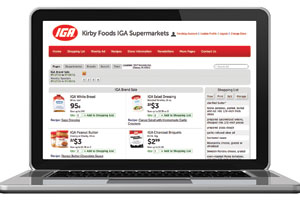 For members who are not quite comfortable overseeing their own websites, IGA provides most of the content, including recipes, meal planners and “gliders” — visual images that move past the viewer on the screen, Walz noted. IGA provides five gliders for each site — one that’s customized for the store, and four images that are more general, he explained.

IGALink also offers retailers the option to post their weekly ads in a digital format, which enables shoppers to search the site by department or specific item, Walz said. This summer IGA is planning to introduce a new option that will enable retailers to post their print ads in a PDF format, he added.

Several IGA members already had websites before IGALink was created, and between 20% and 25% of alliance retailers continue to offer their own sites to customers, Walz said.

Of the remaining retailers, less than half are personalizing their sites, he added, “though the number is increasing because of a growing recognition of the importance of connecting with shoppers using new media.”

“Originally the content we offered was broader — focusing on a season like spring or fall. But now we’ve drilled down to specific holidays or events within a season — such as spring cleaning or St. Patrick’s Day or Cinco de Mayo — that a retailer can use to drive store traffic.

“We’ve also partnered with the MyPlate.gov program from the U.S. Department of Agriculture to complement what we offer on the health and wellness side of the site.”

Walz said IGA looked at a number of ways to develop a website that would appeal to consumers at the same time it made it possible for each IGA retailer to have his own visibility.

The alliance ultimately decided to work with Webstop, a Tampa, Fla.-based website developer, “because it is an organization that understands IGA,” Walz said. “It’s a company that works only with supermarkets, which was attractive to us because it meant its marketing was always designed to bring shoppers to a store.

“We also liked the idea that the websites it develops are highly interactive, so the shopper experience is comparable to some of the best online websites available,” he added.

IGALink is only available to IGA members in the U.S., Walz said, “though we’re continuing to talk with retailers in other parts of the world, and we’re always keeping our options open.”