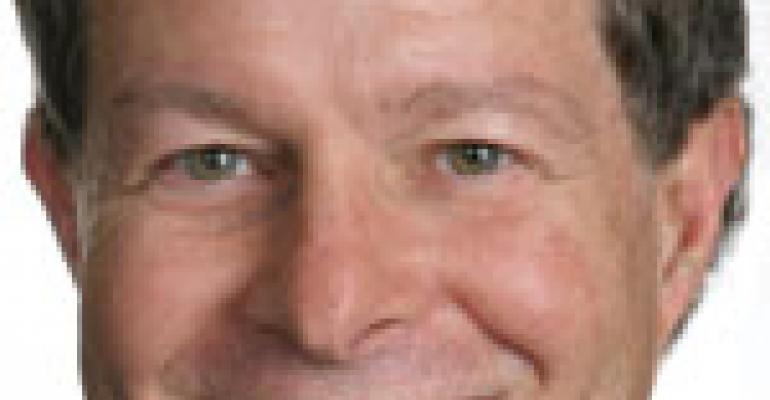 John Mackey helped usher natural and organic foods into the mainstream, riding a concept he created that emphasizes product quality as much as social responsibility. Whole Foods Market, just another natural-food store in Austin, Texas, 30 years ago, is now an $8 billion, multinational phenomenon. John Mackey helped take the movement into the black. The co-founder, chair- man and chief executive officer

John Mackey helped take the “green” movement into the black.

The co-founder, chair- man and chief executive officer of Austin, Texas-based Whole Foods Market — a college dropout who admits he knew very little about business when he opened his first store — has created a natural and organic juggernaut. Because of his leadership in the mainstreaming of natural and organic foods and his success at building a multinational banner, SN has named Mackey to its Hall of Fame.

“It's not that there would not have been a natural-food movement without him, but he really spearheaded it,” said Andrew Wolf, an analyst with BB&T Capital Markets, Richmond, Va. “Every movement needs its natural leader, and he was it.”

When a 25-year-old Mackey and his then-girlfriend, Rene Lawson Hardy, opened their first vegetarian store in Austin in 1978, natural and organic products were the domain of tiny, mom-and-pop-style operations and a handful of small chains. Many of those small chains would eventually be swallowed up by Whole Foods.

“We didn't have any grandiose plan,” Mackey recently said in an interview with Reason.tv. “We thought opening our own store would be fun. We would be making money to support ourselves, and we would be helping people be healthier.”

That first store, called “SaferWay” — a dig at Pleasanton, Calif.-based Safeway — actually didn't make any money its first year. In fact, it lost $23,000 of the original $45,000 that Mackey had scraped up to open it.

He and Hardy were living upstairs from the store, using a hose attached to the dishwasher to bathe, and taking no salary at all.

In the second year, however, a capitalist was born. The store made a $5,000 profit, and Mackey morphed from being just another hippie with a health-food store to being a businessman with a plan.

He saw an opportunity to expand into a larger store, and convinced some investors to back him in the venture. In 1980, he opened the first Whole Foods Market, a 10,500-square-foot store that dwarfed most other health-food stores at the time.

“That first Whole Foods Market was incredibly successful,” Mackey told Reason.tv. “We were profitable by 3 in the afternoon on our first day.”

Mackey had merged his business with another local health-food retailer, Clarksville Natural Grocery, to operate the store in what would be the first in a long series of mergers and acquisitions for Whole Foods.

Now Mackey oversees a company that operates 284 stores in the U.S., Canada and England, with just over $8 billion in sales for the fiscal year that recently ended. That volume is more than double what the company tallied just five years ago, and profits are nearly 100 times what the company earned in 1992, the year before it became publicly traded.

Although Whole Foods no longer posts quarterly double-digit gains in same-store sales as it did for much of the decade, it continues to impress analysts with its financial performance.

“The stock was down in 2008, but it rebounded in 2009, and generally the stock has done much better than other supermarket companies,” said Wolf of BB&T.

The company also generates the best profit margins of any supermarket operator, he explained. Gross profits were a healthy 34.3% of sales in the most recent fiscal year, despite the top-line pressures of the weak economy.

Whole Foods' superior performance relative to its peers can be attributed in part to its product mix, a combination of not only natural and organic merchandise, but also high-end perishables and prepared foods.

“What impresses me when you go into their stores is the emphasis on quality,” said Chuck Cerankosky, an analyst with North Coast Research, Cleveland. “The merchandising is all about quality and unique foods on top of the natural and organic attributes.”

That is especially true in the prepared-food areas, he pointed out. Store-made food dishes such as gourmet pizzas, salads and ethnic entrees, often attractively merchandised on a network of hot and cold buffets, account for 19.1% of the Whole Foods' sales.

“One of the things he taught the industry to do was to upgrade their prepared foods,” Cerankosky explained. “Whole Foods not only used natural and organic ingredients in their prepared foods, but raised the quality level tremendously. They proved that consumers would pay up for better quality, and you have seen that same philosophy move into many other stores.”

Whole Foods seeks out locations with high concentrations of college graduates, citing well-educated consumers as among the chain's best customers.

Each store opening has become an event, with some of the massive locations measuring up to 10 times larger than the company's first store and including amenities such as full-service restaurants and cooking schools.

The company expanded beyond North America — something no conventional U.S. supermarket chains have tried in years — with the 2004 acquisition of the Fresh & Wild natural-foods chain in the U.K.

Throughout the banner's rapid rise, Mackey has remained a forceful personality with outspoken, sometimes controversial views. He advocates an approach to business called “conscious capitalism,” which seeks to elevate the concept of business as a social good.

He insists that companies can be both profitable and serve a diverse array of stakeholders, including investors, employees, vendors, customers and the environment.

“The philosophy I had before starting Whole Foods was that business is evil and government's good,” he told Reason.tv. “Then I started a business, and was trying to meet payroll, and I realized a lot of people thought I was the bad guy, so I had to kind of throw out my world view.”

Now, he said, after poring over the economic philosophies of such writers as Ludwig von Mises, Friedrich Hayek, John Stuart Mills and Adam Smith, he has come to believe in “markets, individual empowerment and individual choice.”

That libertarian-style view- point has often put him at political odds with some customers, who may embrace Whole Foods for its more left-leaning, “green” image.

His antipathy toward unions — he is famously quoted as comparing them to herpes — is one example of his outspoken nature, and this past year his comments about health care reform led to an online movement to boycott the chain.

He also lambasted the Federal Trade Commission for its investigation of Whole Foods' acquisition of Wild Oats Markets, a deal that has since been completed, although the FTC mandated that Whole Foods must still seek to sell 32 locations by next March.

Mackey's free-market approach, however, is tempered with a substantial dose of social consciousness. He believes executive pay should reflect the pay of other employees in an organization, for example. Since 2007 he has paid himself a salary of only $1 a year, and other executives' salaries are limited to a multiple of the average earnings of the company's hourly laborers. In addition, the company has a broad-based stock option plan that is primarily used to reward non-executive workers.

“Their mission at Whole Foods is based on taking care of all their constituents,” said Wolf of BB&T Capital Markets. “They believe they are making a difference in the world, that eating natural and organic foods is good for individuals and makes people healthier and happier.”

Mackey explains that he wants to “tear down the wall” that people imagine exists between for-profit corporations and non-profit social organizations.

“We need to move people away from the idea that business is bad because it tries to make money,” he said. “I want to get people to see that business has the potential for deeper purpose.

“I didn't start Whole Foods to make as much money as possible. I wanted to sell healthy food, help people earn a living, and do something I felt good about, and was on fire about.”