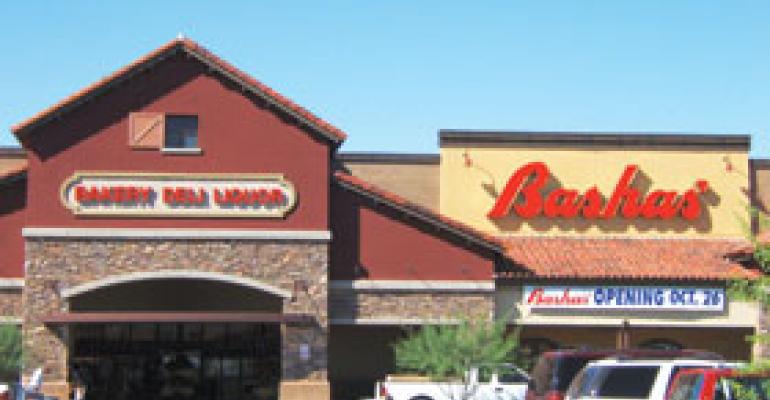 CHANDLER, Ariz. As it prepares to emerge from Chapter 11 bankruptcy, Bashas' here expects sales and earnings growth of 3% a year over the next few years. That estimate by the court-appointed financial advisor who has been working with the chain for a year was seconded by Darl J. Andersen, the chain's president and chief executive officer, who said it is realistic, reasonable and achievable, according

CHANDLER, Ariz. — As it prepares to emerge from Chapter 11 bankruptcy, Bashas' here expects sales and earnings growth of 3% a year over the next few years.

That estimate — by the court-appointed financial advisor who has been working with the chain for a year — was seconded by Darl J. Andersen, the chain's president and chief executive officer, who said it is “realistic, reasonable and achievable,” according to court documents.

Bashas' is expected to formally emerge from bankruptcy on Saturday — 15 days after a judge in the U.S. Bankruptcy Court in Phoenix confirmed the chain's reorganization plan over the objection of its secured lenders. Under the plan, Bashas' agreed to pay all creditors within three years — a plan Judge James M. Marlar called “ambitious.”

Marlar said he confirmed the reorganization plan “[because] the cumulative witness testimony presented by [Bashas'] was frank, honest and persuasive … and it was believable. … The debtors are not likely to default or need further reorganization.”

In other developments contained in the judge's decision:

— Andersen, who was named chief restructuring officer a month after the Chapter 11 filing — and who subsequently added the titles of president and CEO — said he will retain those titles for the next three years “to see the plan through.” Andersen had spent 25 years with Bashas' prior to his retirement in 2003 as chief financial and administrative officer.

— Bashas' said it plans to add two outside members to its board of directors.

— Edward N. Basha, chairman, has agreed to take a salary of just $1 per year until the reorganization has been completed and all debts repaid.

Bashas' is emerging from bankruptcy with a profit exceeding $104 million, out of which it will make its initial repayments to creditors totaling $59.4 million.

Two unintended benefits of the Chapter 11 filing, Andersen told the court, were the settlement of the chain's ongoing litigation with the United Food and Commercial Workers Union, “which stopped the floodgates of attorneys' fees,” he said; and the ability to reject leases or get concessions from landlords, “which gave more strength to the cash-flow projections.”

During the course of the bankruptcy Bashas' rejected 37 leases, modified the terms of 67 others and reduced the number of stores from 177 to 132. All stores are in Arizona, except for single locations in Needles, Calif., and Crownpoint, N.M.

Pending objections from dissenting parties, Bashas' is scheduled to formally emerge from Chapter 11 Saturday — two weeks short of 14 months after it filed for bankruptcy protection on July 12, 2009. On the day it emerges it will make the initial payment to creditors.

In a letter to Bashas' employees announcing confirmation of the reorganization plan, Edward N. Basha 3rd, vice president, retail operations, said the company was “humble, grateful and extremely pleased” that the plan had been accepted.

Although there was a 14-day window between Aug. 13, the day the plan was confirmed, and this Friday, the day by which any appeals must be submitted, Basha said the company has several initiatives that have been held up pending confirmation.

“Bashas' plans on moving forward,” he said in his letter.

The reorganization plan had the support of the chain's equity owners — nine members of the Basha family — plus a committee of unsecured creditors; opposing the plan were the chain's secured lenders.

In his 78-page decision to confirm the reorganization plan, Judge Marlar said: “Though a bankruptcy proceeding represents the ‘dark side of capitalism,’ Chapter 11 allows for financial redemption.”

He said delaying the reorganization process due to objections from the chain's secured creditors was unacceptable. “Not acting now would negatively affect any ability of [Bashas'] to reorganize due to the time delay, the ongoing burden of administrative expenses and the continuing uncertainty of [Bashas'] business and repayment plan.

“No competing or alternative plans have been proposed. Any new plan could not exceed the 100% payment plan now proposed. It would be futile to go back to the drawing board with an acceptable 100% repayment plan now before the court.

“In addition, this court recognizes that in cases of this magnitude … [and with] the number of Arizona jobs involved and with thousands of creditors, it is critical that this full-payment plan … be confirmed now.

“Further delay is not in anyone's best interest.”

According to the court documents, Bashas' initially ran into financial troubles in April 2009, when it was unable to meet its obligations “due to over-expansion and a general downturn in the national and Arizona economies.”

That prompted more intense scrutiny from its lenders, which led Bashas' to file for Chapter 11 protection.

In court testimony, Andersen said that when he returned to the company, he “searched for old-fashioned ways to turn the business around” to save jobs, pay off creditors and eliminate the company's “girth.”

His actions included reductions of 2% to 15% in salaries of all employees; cancellation of the corporate jet; modifications in the company's insurance programs; and even renegotiations of pest-control contracts. Through his efforts, he told the court, Bashas' cut its annual corporate budget by $57.6 million and generated additional one-time savings of $9.5 million — efforts that stopped the bleeding and enabled Bashas' to become profitable again, he noted.

Since then Bashas' has stayed within its budgets, the court said, “and positioned itself to emerge from bankruptcy as a leaner, more efficient enterprise. And importantly, it has become profitable.”

In court testimony, Christopher Linscott, the court-appointed financial advisor to the chain, said the company had actually reorganized itself over the past year and was positioned to meet the terms of the reorganization.

He also said Bashas' is “now properly positioned, from a managerial and operational standpoint, to enable the [reorganization] plan to work as contemplated,” especially given the fact it has operated for a year without post-petition financing or a revolving line of credit.