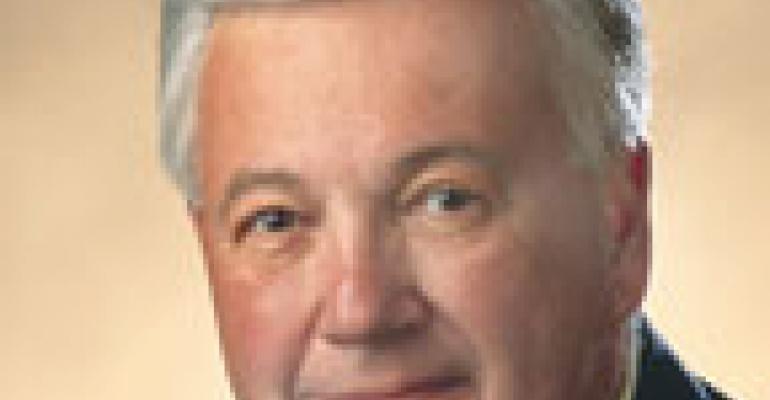 What looks like the worst of times for the independent grocery sector unemployment at a 15-year high, commercial credit markets locked, rising operational costs and shoppers trading down and not filling their pantries could turn out to be the best of times. At least that is what the National Grocers Association here is hoping for in the year ahead. Thomas K. Zaucha, president and chief

ARLINGTON, Va. — What looks like the worst of times for the independent grocery sector — unemployment at a 15-year high, commercial credit markets locked, rising operational costs and shoppers trading down and not filling their pantries — could turn out to be the best of times. At least that is what the National Grocers Association here is hoping for in the year ahead.

Thomas K. Zaucha, president and chief executive officer of NGA, told SN that while the country's economic conditions are severe, many independents are still well positioned to grow their business.

“It's like the advice you hear constantly when the stock market is down. It is not a time to sell but to buy,” Zaucha explained. If properties and stores are available and rents are low, “this is probably the best time to invest and negotiate for fixtures and equipment and related materials to open retail outlets.” It also affords opportunities for independents to experiment with alternative formats, he added.

All depends, of course, on the availability of credit and the financial health of the retailer. Zaucha said loans are available. He noted that NGA is an affinity partner with the National Consumer Cooperative Bank, Washington, which works closely with independent grocers in gaining access to credit (see “Most Worthy Scores Credit” link).

The recession is forcing people to eat at home more, affording independent grocers another opportunity to grow sales by providing meal and cooking solutions. “There is more scratch cooking being done than we've seen in a number of decades. That to me is a plus,” said Zaucha.

The economy also is making shoppers more value-conscious than ever before, which can prove to be a two-edged sword for independents. Independents can benefit by doing what they do so well, marketing their weekly specials and in-store promotions, said Zaucha.

He pointed out that upper-income shoppers are trading down from fine-dining restaurants to gourmet or quality prepared foods sold at supermarkets. Massachusetts-based Roche Bros., which Zaucha visited on a recent trip, is an example of an independent set up to take advantage of this shopping trend. With its impressive cheese departments, specialty meats and prepared foods, the family-owned independent caters to those in moderate- and upper-income brackets. “Even the higher price [for quality foods] offers significantly more value than going out to a restaurant,” said Zaucha.

At the same time, the economy is forcing shoppers who seek price and value to the discounters, which places additional price pressures on the independent sector.

Negative price pressures put a squeeze on profits. The quandary is how to make stores keep a healthy balance between sales and profits.

Zaucha said independents have a number of strategies at hand to achieve a proper balance. “You follow your competition. You enhance your promotion, advertising, marketing. You emphasize your strengths,” he said.

While Wal-Mart is viewed as the No. 1 competitor that independents face, Zaucha says NGA members have proven they can compete effectively against the large supermarket chains by understanding their customers, being flexible and able to react quickly to changes in the marketplace, and working in conjunction with strong wholesalers to be price-competitive. Even going up against Wal-Mart, “there seems not to be the dislocation of independents that we saw 10 years ago,” said Zaucha.

Even layoffs in many sectors, particularly in the Midwest and Northeast, are viewed as advantageous for grocers. A pool of quality labor is now available for the first time in many years, retailers are reporting. “People are in need of work, and the quality of potential associates and the professionalism they bring is a real opportunity for independents to enhance their overall service,” said Zaucha.

All of these pluses do not diminish the severity of the nation's woes and the economy's long-term potential negative impact on grocery retailers, who voice uncertainty about the future.

Zaucha said that what makes this recession different from previous ones is its severity and the failure of the system to prevent it.

“Even Alan Greenspan [former chairman of the Federal Reserve] admitted he misread the ability of the market to self-correct. In the last eight years, we've really been regulatory-free. It's been a true Chicago school [free market] approach to the marketplace, so even those rules and regulations that should have been followed were not,” Zaucha stated.

For NGA members, the economy is their No. 1 concern going into 2009 (see "NGA Survey" link). A close second is the cost of doing business, followed by higher taxes.

Besides the economic crisis, other issues that carry economic consequences, says Zaucha, are the rising cost of health care, the viability of Social Security, the cost of the war in Iraq and the cost of repairing the nation's infrastructure.

“Talking about the recovery process, the one question that keeps coming up is where is the money going to come from? While the economy is naturally No. 1, higher taxes, health care and energy costs are all tied back to the No. 2 concern, which is the cost of operations.”

When the NGA makes its annual trek to Congress next spring, members will greet a lot of new faces.

“You enter a new Congress and administration and are hopeful there is more bipartisanship in recognition that there are more macro issues facing us,” Zaucha said. “For example, we are vehemently opposed to the card check issue [Employee Free Choice Act]. To ask Obama and the Democrats to be against it would fall on deaf ears.

“You already have seen the contentiousness of union and non-union in the auto industry bailout. That is the last thing we need, is to begin a new Congress and administration drawing a line in the sand. There are bigger issues and questions we need to face as a country. It would be my hope at a minimum that this issue does not remain a priority that organized labor would like it to be.”

The NGA was quick to send a letter last month to President-elect Obama that outlines the organization's positions and concerns on a number of issues, including the Employee Free Choice Act.

“We have always taken the position that for independent, privately held companies, and for small business in general, you need bipartisan support if you are going to succeed in winning a particular issue,” Zaucha said, noting that relief from the long-fought repeal of the estate tax will require support of both Republicans and Democrats.

On addressing such issues as excessive bank interchange fees on debit and credit transactions, as well as traditional antitrust policy questions, he expects favorable action from the new administration.

However, when it comes to organized labor issues, Zaucha expects a tough fight to prevent passage of the Employee Free Choice Act, which the Obama administration supports. “That is the trade-off, and hopefully we will still have enough votes in the Senate to prevent passage. That's going to be close.”