DALLAS — Innovative merchandising created through collaboration among retailers and suppliers requires careful planning and dedication, but it can be a powerful driver of incremental sales if executed properly, according to presenters at an FMI2012 session here.

“We had to start thinking more like shoppers, and had to work on breaking down barriers and silos within the company,” said Don Fitzgerald, senior vice president of merchandising at Roundy’s, Milwaukee, speaking about a partnership with The Clorox Co. that leveraged the expertise and authority of the chain’s pharmacists to drive sales of preventative-care products. “We had to do some unconventional things.”

The merchandising program, which incorporated Clorox-brand disinfectant wipes with OTCs and other items, was effective in driving incremental sales in the categories of products involved, Fitzgerald said.

One of the keys to making the program effective, he said, was having Clorox educate the retailer’s pharmacists about preventative health care. 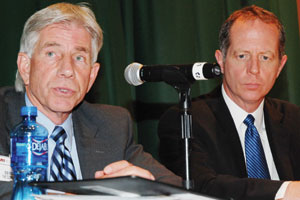 “We said, ‘Let’s effectively use pharmacy as your offensive tool,’” explained Bob Richardson, director of sales and customer development at Clorox. Richardson (right) is pictured with Fitzgerald at FMI2012.

The emphasis on preventative care also played into consumer trends, he pointed out, as the costs of health care have increased and the economy has remained weak, forcing many consumers to be more concerned about the costs of becoming sick.

He said transparency and honest discussion about costs were essential to making the merchandising effort with Vitaminwater work.

“The only way to survive is if you both make a profit,” he said. 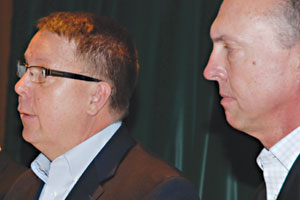 The comprehensive merchandising program, which is ongoing, involves tie-ins with performer Carrie Underwood and a web-based effort that ties into the in-store displays. It helped increase penetration of Vitaminwater by 26.5% in 2011, according to Wade Duke, president of the Kroger account team at Coca-Cola Refreshments. Wade (right) is pictured with Nelson at FMI2012.

The effort involves displays in the Nature’s Market sections of Kroger stores and includes educational efforts about the importance of hydration.

Although he conceded that there are challenges in the execution of these types of merchandising ideas, “when retailers see what can be done, it starts to become the norm rather than an aberration,” he said.

Thom Blischok, chief retail strategist at Booz & Co., who led the panel discussion, said these types of collaborative partnerships between retailers and their suppliers present retailers with their best opportunity to grow their baskets amid what he predicted will be prolonged weakness in consumer spending.

“Pricing is not a strategy to grow your business long-term,” he said. “Merchandising innovation is the most significant thing you can do to change the in-store experience. And if you don’t do it, your competitors will.”