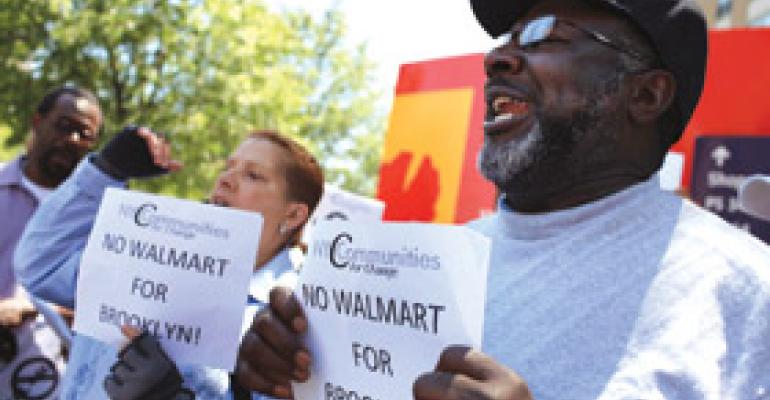 NEW YORK Wal-Mart's struggle to arrive in New York City may be more than a matter of delays at the bridges and tunnels. Some sources, speaking on the condition of anonymity, said that nervous landlords are as much to blame as union and political pressures for the slow arrival to the five boroughs of the Bentonville, Ark.-based retailer, which has been eyeing sites in New York for years without having

NEW YORK — Wal-Mart's struggle to arrive in New York City may be more than a matter of delays at the bridges and tunnels.

Some sources, speaking on the condition of anonymity, said that nervous landlords are as much to blame as union and political pressures for the slow arrival to the five boroughs of the Bentonville, Ark.-based retailer, which has been eyeing sites in New York for years without having made a single property deal here. Developers, they said, worry that the pricing pressure and additional competition Wal-Mart would bring to the region could mean trouble for their other tenants and other projects and as a result have been reticent to submit to deals.

“Wal-Mart's been in the bidding for a lot of locations, but developers are looking ahead and thinking what would happen to their other centers if Wal-Mart got in,” one New York area real estate expert told SN. “So landlords have been using the threat of Wal-Mart taking sites as incentive to get other deals done, and Wal-Mart has been losing out.”

Wal-Mart officials did not respond to a request for comment.

Whatever the source of Wal-Mart's difficulties, many figure it's only a matter of time before the retailer establishes a base in New York City. They can point to any number of indicators including the company's success in Chicago, where today it is opening large and small stores after a six-year struggle to crack the city.

Trends toward public awareness of access to food — as well as a need to add new jobs — are tailwinds as Wal-Mart approaches urban markets like New York. Analysts estimate that such sites represent up to a $10 billion opportunity for the company.

Real estate executives note that New York's population density — and a lack of shopping options relative to other parts of the country — can be a winning combination for big-box retailers and their landlords.

“Manhattan and the five boroughs are under-stored for retailing,” said Joseph Macnow, executive vice president of developer Vornado Realty Trust, speaking at an investor event. “We have some of the lowest per-capita retail relationship in Greater New York than virtually anywhere in the United States. Dallas, Atlanta, Houston probably have 22, 23 or 24 square feet of retailing for each individual. Manhattan and the five boroughs probably have eight. So if Dallas has 11 regional malls, the borough of Brooklyn has one, the borough of Queens has one. It's under-stored, and that makes the retailers have very, very productive units, and that means they can pay rent.”

In New York, Wal-Mart has been in the news more than most retailers without a presence. It was the subject of City Council debate early this year during which a number of its opponents, including local labor unions, expressed concerns about its arrival — even as they acknowledged there was little they could do to stop a store from coming as long as it meets local zoning code. More recently, the company made a $5 million donation to the city's Summer Youth Employment Program in a goodwill gesture. Last week, Wal-Mart officials were reportedly meeting with residents and local leaders in the impoverished East New York section of Brooklyn where the company has eyes on establishing a potential beachhead at the Gateway II Shopping Center.

Wal-Mart is eyeing additional sites in all five boroughs, sources added. They expect the company could make an announcement soon.

New Yorkers themselves appear to be warming to such an arrival. A poll released late last month by Quinnipiac University indicated support for Wal-Mart was climbing among New Yorkers, even if they still have reservations about the potential effects of its arrival.

The poll of New York City voters revealed that 69% would shop at a Wal-Mart were it convenient to them, up slightly from 68% when the same question was asked in March of this year, Quinnipiac said. Democrats and voters in union households want to shop Wal-Mart by similar margins, the poll added.

New Yorkers also are more welcoming to Wal-Mart, with 63% saying city officials should allow the retailer to open in the city. Only 57% were in favor in the March poll. “Support for allowing Wal-Mart to open in the Big Apple is growing, while the number of would-be shoppers remains constant at more than 2 to 1,” said Maurice Carroll, director of the Quinnipiac University Polling Institute.