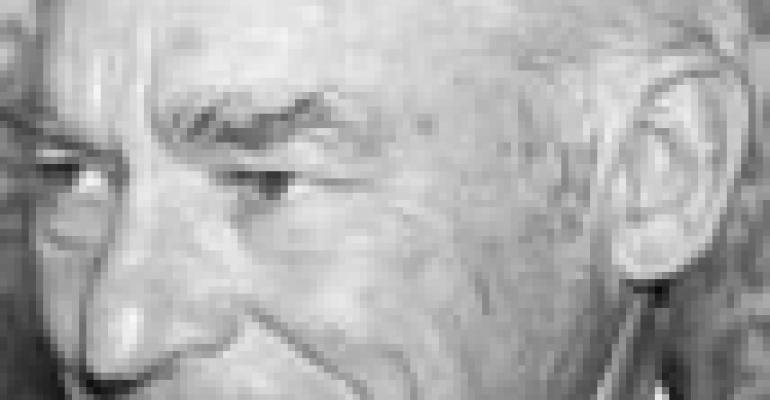 Founder Sam Walton's leadership laid the groundwork for Wal-Mart Stores to become one of the world's largest and most successful corporations that have ever existed, and the largest food retailer in the U.S.

A retail visionary who grew a small Southern variety store into the world's largest company, Sam Walton's influence continues to reverberate at Wal-Mart — and just about anywhere else that there's business to be done.

“Sam Walton's legacy is that he has single-handedly changed retail as we know it in this century,” C. Britt Beamer, chairman of America's Research Group, Charleston, S.C., told SN. That legacy has secured Walton a seat in SN's Hall of Fame.

Walton's achievements include pioneering an everyday-low-price strategy, then spreading it worldwide, developing a focus on thrift and efficiency that businesses in all industries admired and would try to emulate. A thirst for innovation and a willingness to gamble on new ideas helped Bentonville, Ark.-based Wal-Mart Stores grow in size and develop new concepts, turning it not only into the largest discount merchant in the U.S. but its biggest seller of groceries. Walton was also a sharp businessman who valued employees and operated his company for their benefit as much as his own, sources said.

His influence continues to be a guiding principle for Wal-Mart nearly 20 years after he died.

Samuel Moore Walton was born in Kingfisher, Okla., in 1918, where his father, Thomas Walton, was a struggling farmer. Looking for more work, Thomas moved the family — including a second son, James “Bud” Walton — to Missouri. Sam Walton was known for his strong work ethic as a youth. At age 13 he became the youngest Eagle Scout in Missouri history and later was a star athlete and student leader in high school.

He graduated from the University of Missouri in 1940 with a degree in economics, and was a management trainee for J.C. Penney in Iowa. He then served as a captain in the U.S. Army Intelligence Corps from 1942 to 1945.

Following the war, Walton resumed working in retail in a move that foreshadowed the massive growth of the U.S. retail sector. Reportedly with the help of a loan from his father-in-law, Walton at age 26 purchased a Ben Franklin variety store in Newport, Ark. Walton in a recorded interview admitted he knew so little about the retail business at that time that he “started doing strange things” that were not a part of the Ben Franklin playbook, including selling ice cream and popcorn outside the stores — “anything I could hawk.”

Walton also had his eyes outside of his store, particularly on the nascent discount sector and the growth of retail chains. In 1950 he purchased a Ben Franklin store in Bentonville and operated it under the Walton's 5 and 10 name. By 1959, Sam — along with his brother Bud, also an independent owner of Ben Franklin franchises — had nine variety stores between them and were Ben Franklin's largest franchisees.

In 1962, Walton opened his first discount store under the Wal-Mart banner in Rogers, Ark. The success of this unit convinced Walton that there was opportunity for discount stores in the small rural towns typically bypassed by other discounters, including emerging competitors such as Kmart and Target.

This realization sent Wal-Mart zooming on an expansion kick throughout the rural South, during which Walton would identify sites via flyovers in his plane. At the same time he committed to providing shoppers in these small markets with affordable goods, devoting the organization to driving costs out of the system to make it happen.

That Wal-Mart learned to operate on slimmer margins was a credit to Walton's innovation, Beamer said. Hiring operators with grocery backgrounds also helped.

“His greatest achievement may have been that he didn't stay focused in-house. Kmart's greatest weakness was that they kept looking to their internal people, so that everything was inside the box,” Beamer explained. “What Sam did was that he hired a bunch of people in the beginning who were grocery guys. And grocery guys look at retail differently than anybody else because it's the ultimate low-margin category.

“As a result, when Sam was building his company, his people had a viewpoint that was different than everybody else,” Beamer added. “They knew they could live in these low-margin worlds and be happy.”

Walton also looked outside of his company when it came to developing technologies, and as a result Wal-Mart grew into one of the first retailers to connect its stores in a network to headquarters, resulting in still greater efficiency. Walton also had a good sense of his own place in the organization, sharing profits with workers — whom he called associates long before it became fashionable — and creating a structure that wouldn't impede its growth, noted Dave Marcotte of Kantar Retail.

“Sam Walton is an example of someone who started a family business, saw it grow, and before it got too big, realized that he had to change the structure to make it strive and survive,” Marcotte said. “Very few family businesses make it through three generations for good reasons.

“What Sam Walton was able to do was to have ingrained in his family that the retailer/company is the foundation of their assets — but is not their foundation of income. Their real income comes from the investments and other businesses that they develop as an overall corporation supported by a healthy asset known as the company,” he explained. “That's a very different way of thinking for a family business, and he doesn't get enough credit for that. The reason Wal-Mart is as big as it is today is because he came to that realization.”

In 1985, Forbes named Walton the richest man in the word, and his heirs still populate the ranks of the wealthiest.

Walton, who died of cancer in 1992 at age 74, didn't live long enough to see his company become the largest U.S. seller of groceries or the largest retailer on a global scale, although both movements had begun before then.

The warehouse club that bears his name, Sam's Club, debuted in 1983 near his birthplace in Midland City, Okla. The grocery-and-general-merchandise Wal-Mart supercenter — which debuted in Texas as Hypermart USA in 1987 — was a tsunami that had a transformative effect on supermarkets. Many that survived the relentless price competition Wal-Mart brought to the market did so by becoming themselves more Wal-Mart: With a greater emphasis on low costs and low prices while challenged to develop other ways to stand apart.

These forays into food weren't completely foreign to Walton, Beamer said. Aside from his hiring of grocery executives, Wal-Mart even at the beginning relied on some core grocery items such as snack foods and soda to help establish its price leadership.

Wal-Mart's international expansion began with a joint venture in Mexico in 1991. Wal-Mart would subsequently bring Walton's everyday-low-price gospel around the globe, with operations today in 15 countries and four continents. International operations today are by far the fastest-growing segment of Wal-Mart.

“Creating a common culture across different countries is very difficult for a lot of good reasons,” Marcotte noted. “But using Sam Walton as an embodiment of the idea that you can start from very humble beginnings, and you can be successful if you embody the Wal-Mart way, is an extraordinarily powerful message on an international level.”

Wal-Mart has become the No. 1 food retailer in the U.S. and Canada with an estimated $130 billion in consumables sales last year from 2,756 supercenters, 152 Neighborhood Markets, plus expanded perishables offerings in its 1,000-plus traditional discount stores.