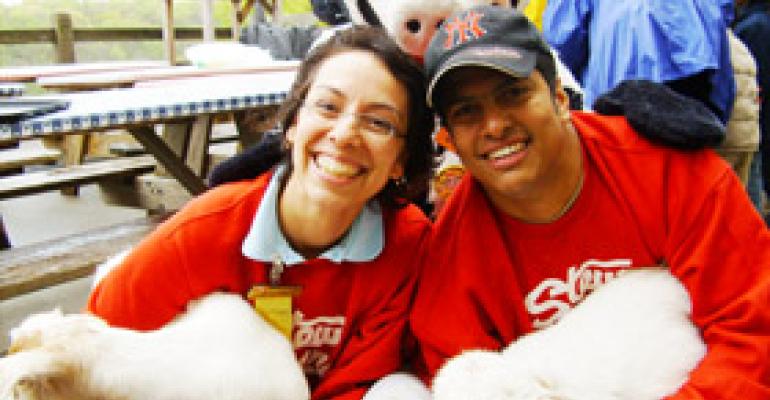 As spring returns to Connecticut, shoppers at Stew Leonard&#8217;s, the famed four-store Connecticut-based grocer, begin to ask employees, and post on the retailer&#8217;s Facebook page, &#8220;When are the animals coming back?&#8221;

As spring returns to Connecticut, shoppers at Stew Leonard’s, the famed four-store Connecticut-based grocer, begin to ask employees, and post on the retailer’s Facebook page, “When are the animals coming back?”

Those are the animals — two cows, two sheep and two goats — that from April through early November inhabit the “Little Farm,” a small fenced-in area adjacent to the original Norwalk, Conn., store that has been duplicated at the Danbury, Conn., and Yonkers, N.Y., locations. (Stew Leonard’s store in Newington, Conn., lacks the space.) The Little Farms are a magnet for children and part of what makes Stew’s “the Disneyland of dairy stores,” as the retailer was described by the New York Times.

Since 2007, each Little Farm at the beginning of the season receives a pair of baby cows, goats and sheep between the ages of 2 and 4 weeks. Baby chicks and ducks are added shortly thereafter. In mid-July, the now-much-larger cows are returned to their original farm and replaced with new calves. “Part of the fun is watching the animals grow” during the year, said Meghan Bell, director of public relations for Stew’s.

The baby cows, sheep and goats will arrive in grand style on April 30, taking part in a free welcome parade at each location throughout the day. Led by a stilt walker, “the Amazing Andy,” and three costumed characters, Clover the Cow, Daphne Duck and Cynthia Chick, the animals will be escorted on a hay-filled wagon pulled by a truck or tractor around the store. They will be greeted by cheering children and parents at the farm, where “Farmer Dave” — Dave Hartford, whose farm in Ellington, Conn., provides the animals — will answer questions and invite the kids to pet the animals. The event will also feature face painting, balloons, music and snacks.

About 100 people showed up at each store last year, when the welcome parade was initiated. “The kids were hilarious,” excited to get “up close and personal” with the animals, Bell said.

Leading up to the farm animals’ arrival, children 4 to 12 can enter the “Name Our Babies” contest at the three stores, submitting recommended names in a suggestion box. Winners get their picture taken at the parade with Farmer Dave and the animal they named.

During their stay at the Little Farm, the animals are well cared for. “Each store has a dedicated staff member who checks, cleans and feeds the animals,” said Bell. “Our security team checks them at night.” The farms are overseen by Barbara Bucknam, Stew’s director of quality, who recently earned a degree as a veterinary assistant.

The original Little Farm came into being in 1969 when founder Stew Leonard, Sr., purchased an old farm on U.S. Route 1 as the site of the Norwalk store. To buy the land, he had to assure the owner, Hazel Schultze, that in addition to his store he would build a farm for her sheep, whom she could visit every day, and would even add some goats, ducks and chickens to make it a "real" farm.

Proving to be such a hit in Norwalk, Little Farms were added to the Danbury and Yonkers locations when they opened.