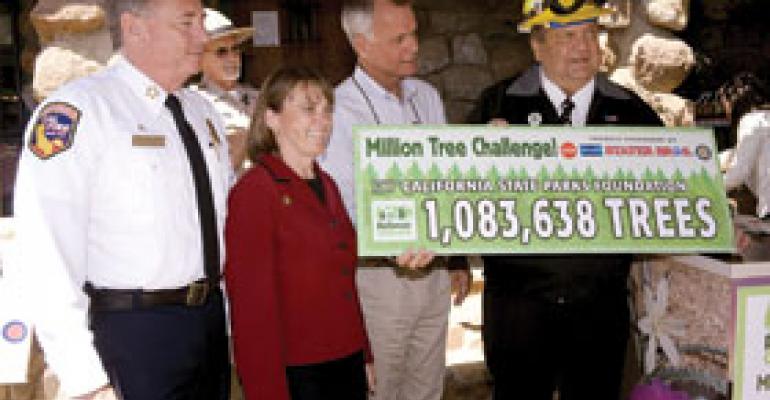 JACK BROWN IS DEEPLY LINKED to the city of San Bernardino, Calif., and the communities that surround it. When Brown was a boy, he used to ride his bike through the public areas of Norton Air Force Base. Nearly 60 years later, in 2009, Stater Bros. Markets moved its offices and opened a new distribution center on a portion of the same property. And the orange, grapefruit and grape groves surrounding

JACK BROWN IS DEEPLY LINKED to the city of San Bernardino, Calif., and the communities that surround it.

When Brown was a boy, he used to ride his bike through the public areas of Norton Air Force Base. Nearly 60 years later, in 2009, Stater Bros. Markets moved its offices and opened a new distribution center on a portion of the same property. And the orange, grapefruit and grape groves surrounding the area have given way to the communities Stater Bros. Markets serves.

Brown has been chief executive officer of Stater Bros. since 1981 and chairman since 1983, making him one of the longest-serving executives in the industry.

He started his grocery career at age 13 as a box boy at Berk's Marketspot, a single-store independent in San Bernardino. “The store was very customer-focused, and Mr. [Billy] Berk was always at the checkstands saying hello to the customers, which is where I learned how important those customers were,” Brown told SN.

He went to work for a Carnation ice-cream store, which is where he stayed through high school before working for a Mayfair in Northern California while attending San Jose State.

After serving in the Navy as a security analyst for three years, Brown came back to San Bernardino in 1959 and took a job as assistant manager at the headquarters store for Sage's Complete Markets, which operated seven 100,000-square-foot stores.

“No one wanted the job at the main store because management kept a closer watch there,” Brown recalled, “but I had learned responsibility in my years in the Navy, so it didn't scare me — and it was a good way to show what I could do.”

Within a year and a half he had become first vice president, responsible for sales and merchandising.

During that period he also happened to meet Don Marsh, chairman of Marsh Supermarkets, Indianapolis, at a Super Market Institute meeting. “Marsh was interested in opening larger stores, so he came out to look at Sage's and recruited me to join his company, which I did,” Brown said.

He was named a corporate vice president, with responsibility for helping Marsh open larger stores — 40,000-square-foot units, compared with the industry norm of 25,000 square feet at the time — with a larger drug store component.

Brown was subsequently recruited by Cullum Cos., Dallas, to move back to Southern California to become president and CEO of Pantry Markets, a 21-store chain; and a year and a half later, Cullum sent him to Omaha, Neb., to oversee its Hinky Dinky and Grocers Supply Warehouse Stores.

In 1981, John Wallace, chairman and CEO of Petrolane, which owned Stater Bros., asked Brown to run that chain. “At that time I felt like I'd always been a turnaround-type guy, and I didn't see the need for someone like that at Stater, so I turned him down twice — till he finally came to Omaha and talked me into moving.

“When I looked more closely at Stater, I saw things I knew I could help with, including customer service, marketing and merchandising.

“I also realized that, because I was a homeboy, I had ties to the community that others didn't have and that helped me understand our customers better.”

In 1983, Petrolane sold the company, with a New York-based investment group getting 51% and Brown's La Cadena Investments getting 49%. However, when the out-of-state investors tried to buy Brown out, he refused, and a proxy fight ensued.

“I knew that if they got control, they would have downsized the company, stripped the assets and laid off a lot or people, and I couldn't let that happen,” Brown said.

Brown was ultimately successful, and it turned out the proxy fight had long-lasting positive implications, he said. “It brought the company together in ways I didn't have the ability to do because the employees were with me, and it strengthened us as a company for the long-term future.”

At age 71, Brown said he has no plans to retire. “We have a terrific management team, and I'm confident about the leadership of this company for the future, so I plan to remain part of this for the long term.

“Besides, why would I retire?” he said. “I have a really good parking space.”