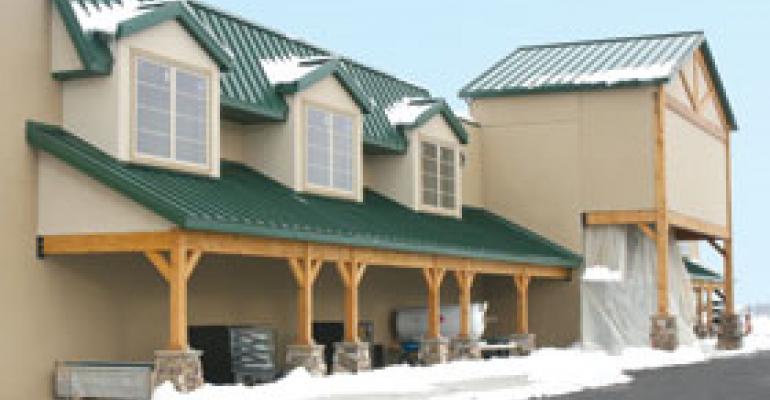 The Crisp family is coming back home next week and bringing the town's first and only supermarket with it. The 42,000-square-foot Crisp's is scheduled to open next Monday on the site of a former hayfield at the north edge of town. Until we open, the only place in town to buy bread and milk is the local service station, Morris Crisp, the family patriarch, told SN. They've been waiting for a grocery

The Crisp family is coming back home next week and bringing the town's first and only supermarket with it.

The 42,000-square-foot Crisp's is scheduled to open next Monday on the site of a former hayfield at the north edge of town.

“Until we open, the only place in town to buy bread and milk is the local service station,” Morris Crisp, the family patriarch, told SN.

“They've been waiting for a grocery store here for a long time,” Michele Crisp, his daughter-in-law, added.

Located less than half an hour south of Provo, Utah, Salem is beginning to experience an influx of population as people move from the city out to the country, and Crisp's hopes to be part of the area's growth, Morris Crisp explained.

“Up till now, the town wasn't large enough to support a store of this size. But today Salem is booming, with a drawing radius of about 11,000 people, and a lot of other small businesses are moving in.”

Although the Crisps have been running a 17,000-square-foot store 100 miles south of here in Monroe, Utah, for the past nine years, Salem isn't really new territory for them: Morris' wife, Jean Nelson Crisp, was born and raised here, “and there are a lot of family ties in this area,” he explained.

Asked about the potential pitfalls in opening a new store in a new area in the current weak economy, Crisp said he's not worried about the recession. “We knew months ago the economy was going down, but people still have to eat,” he pointed out.

Michele Crisp said she agreed. “Eating is a hard habit to break,” she said.

Once the new store opens, Morris Crisp, 74, said he plans to step away from the business and let his son Alan and Alan's wife Michele run the business.

Asked whether the younger Crisps have any concerns about operating a store nearly three times the size of their existing store, Michele said they do not. “Part of the reason for opening a larger store is that the industry has changed, and to play with the big boys, you have to be a big boy,” she explained.

“Mom-and-pop stores are struggling in this era when people want everything for nothing; and to compete, you have to offer the same kind of variety and services as the big-box stores.

“The whole idea here is to offer the same variety as any jumbo-sized store, but to do it with our own kind of small-town, friendly service in a more pleasant environment, without that warehouse feel.”

The new Crisp's will have “rustic elegance,” she said — “the kind of feeling many people grew up with,” including large, sepia-toned photos of old Salem, accompanied by pieces of old furniture, cowbells, window frames, wrought-iron knickknacks and other genuine antiques, nearly all of which came from the Crisp and Nelson families, and many of which date back nearly a century.

The store will also feature some distinctive family recipes, she pointed out, though she said she was reluctant to describe them before the store opens. However, she did talk about one special cookie the store will sell — “what my husband's family has always called ‘um’ cookies,” she said.

“It's a pumpkin chocolate-chip cookie with an orange glaze — a large, fluffy cookie — and when my husband's mother used to make them and they asked what it was called, she hesitated and said, ‘Um,’ and that's how it got its name.”

The store here was designed primarily by Morris Crisp to resemble a ski lodge that might be found in Park City, located about 100 miles north, with aged timber featured prominently on the store's exterior and used again inside on the aisle markers, she explained.

Even before opening the store, the Crisp family has already become part of the texture of the community, Jean Crisp told SN, hosting a booth at the town's Halloween celebration, sponsoring a float in the Christmas Lights parade and taking part in the town's annual Salem Days event.

Asked how it feels to have her family opening a store in the town where she grew up, Jean Crisp said, “It definitely feels like a homecoming, and hopefully the business will work out well.”

The nearest supermarkets are several miles away, Morris Crisp said — a Macey's five miles north in Spanish Fork and a Wal-Mart Supercenter, a Smith's Food & Drug and an independent operator five miles south in Payson.

He's been in the grocery business for 25 years, Crisp said, “and I've operated other stores, but I figured this [location in Salem] was a good opportunity, with good long-range possibilities. The fact there are no other supermarkets close by was a plus in selecting this site.”

At the 17,000-square-foot Crisp's in Monroe, Alan Crisp was responsible for grocery, frozen foods, produce and dairy, while Michele Crisp oversaw meat, bakery, customer relations and the front end. The Crisps have named a longtime employee to oversee the Monroe store as general manager.

At the new store, Alan Crisp will oversee grocery and frozen foods, while his wife will take care of the meat, bakery and deli sections, plus the front end and the bookkeeping duties.