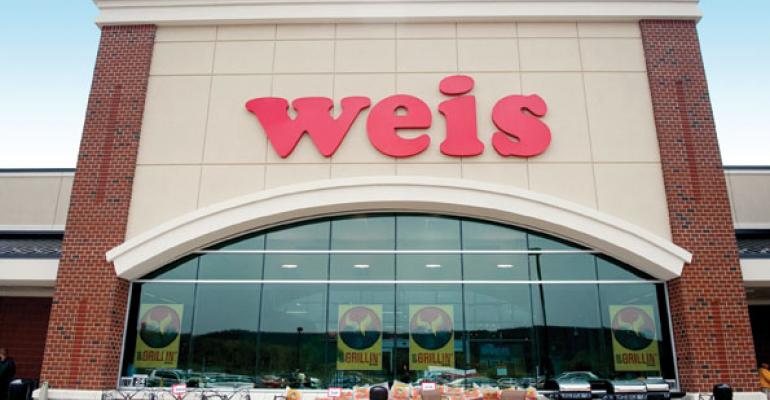 &nbsp; The focus is on renovation, expansion and customer service as the central Pennsylvania-based chain looks to the future.

One hundred years of business is a meaningful milestone, but David Hepfinger would rather bake another cake than blow out candles.

The chief executive officer of Weis Markets said he’s focused on the future of Weis, founded 100 years ago this month in Sunbury, Pa., by brothers Harry (left) and Sigmund (below) Weis. Hepfinger’s vision is to build upon the brothers’ legacy with further geographical expansion through new store builds and acquisitions, renovation of its existing stores, and a sharp focus on quality products, service, local relevance and sustainability.

“In today’s economy and competitive arena, there is no time to sit back and rest on your laurels,” Hepfinger said in a recent interview with SN at Weis’ new store in Bellefonte, Pa. “You need to look forward to capitalize on what you’ve got and the energy we’ve created over these last few years to take us forward to the next 100 years.”

Hepfinger has served as Weis’ CEO since early in 2009 and in those three years has carved out a distinct identity for Weis, showcased in its new and refurbished stores including the 62,000-square-foot new flagship in Bellefonte, a community just outside of State College.

The store, which replaced a small aging unit in a strip mall a mile away, sits high atop a hill overlooking Interstate 99. It includes a Weis Gas n’ Go fuel station in the parking lot. Inside, the store showcases fresh produce and service departments with spacious and colorful displays and includes prominent specialty departments including floral and beer. 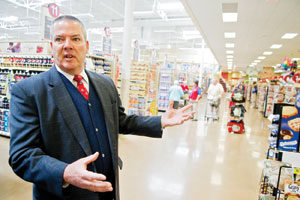 “If you look at this building today you’ll see that we’ve come to terms with understanding who we want to be, and this store reflects it very well,” Hepfinger (left) said. “The produce department stands tall. To a department — whether it’s seafood or sushi or deli or foodservice or meat — there’s service. We’re pleased with this building. And the challenge has become, how do we complete this transition with the rest of the chain?”

The Bellefonte store replacement came as part of an effort to renovate and modernize facilities across the chain dubbed the “No Store Left Behind” program that addressed a store base that was growing old itself. Since launching, the program had touched 110 of Weis’ 159 stores. Hepfinger said his goal is to complete the program by the end of 2013.

“Most of our focus has been getting the fleet up to speed because we had a lot of buildings — I’ll stop short of calling them neglected — but they weren’t tuned up in the traditional way. In our industry it’s traditional to update stores on a six- or seven-year cycle, maybe eight if you stretch it. We had a lot of buildings that haven’t been tuned up in 15, 16, 18 years. We still have 40 or 50 stores that need a pretty significant remodel, and within the next year to 18 months, we’ll have accomplished most of them.”

Along the way, Weis has quietly dropped alternative formats and banners and now operates all but one store under the Weis banner (the lone non-Weis location is a licensed Save-A-Lot). It previously ran a warehouse-style discount format known as Scot’s Lo-Cost, a pet-supplies chain known as Superpets and some stores with the Mr. Z’s banner reflecting a prior acquisition. Those banners have been flipped to Weis stores wherever possible, and results have been strong, with one conversion from Scot’s to Weis resulting in doubled volume, Hepfinger said.

Renovations at Weis include not only updating store looks and sustainability features but crafting an outlet that reflects a “quality, service and value” formula built behind local assortments, pricing, convenience and customer service, officials said. Hepfinger is particularly proud of Weis’ results in stocking stores not only with locally sourced items but brands with particular relevance to shoppers in the markets where they shop.

Though still a regional company, Weis is determined to grow from its central Pennsylvania base and currently operates stores in five states. Most recently Weis successfully bid for three former Genuardi’s stores in a deal that would take it closer to Philadelphia. It has also grown via an 11-store acquisition in Binghamton, N.Y., and has 12 to 14 new ground-up stores on the way, including sites in New Jersey, where Weis currently operates just three stores. 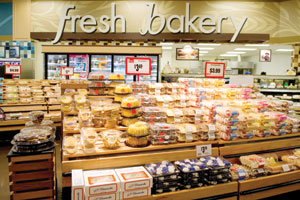 To make sure shoppers can choose from relevant selections in each of these markets, Weis has hired what it called a “local merchant” to make certain that category managers include brands that matter in every area. Weis is also now writing sales fliers specifically for each area, rather than just adjusting a central sales flier, Hepfinger said.

“From a localization standpoint we’ve done very well,” Hepfinger said. “Where we used to write an ad out of central Pennsylvania, most of our recent growth is on the fringes. It’s out to Jersey, down to Philly, into Maryland, up in New York. So our ability to be local everywhere has become more critical. 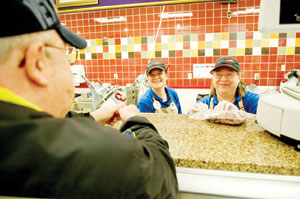 Weis’ “local champion” visits each market in which Weis operates stores for a few days each quarter to make certain regional brands are represented and local tastes and trends are reflected in selections.

“If we don’t do something to go out of our way to help the operators stay local, it’s easy to inch away, little by little,” Hepfinger said. “In New Jersey and Philly, the Victoria [pasta] sauce is just critical. If I come to central Pennsylvania, it doesn’t mean a thing. If I have a category manager to do your analytics on sauce, he’s never going to allow you to cover that item, so even after you get it in they’ll accidentally knock it out down the road. To prevent that dynamic, we’ll maintain this local merchant.”

A move to carry regional milk brands a few years back is now generating $10 million in sales in those brands per year, Hepfinger noted, with some brands in as few as one or two stores. Partnerships with local brands — including Weis’ Five Star co-branded private-label items with brands like Utz, Tastykake and Hanover — also give Weis a local edge, Hepfinger said. Weis calls out local items with blue shelf tags. 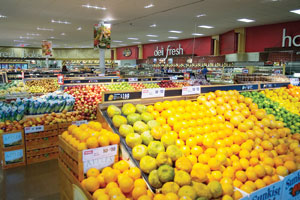 Weis in the meantime is boosting fresh sales behind wide selections of fresh and prepared foods, service departments, large displays and improved buying standards. “I think our quality measures in fresh have come a long way,” he said. “We won’t back down to minimum sizes when we’re dealing with produce standards and that makes a difference in the quality of items you see on the rack.”

Hepfinger believes that engaged and passionate employees can take sales to still higher levels, although he acknowledged that is a long-term process where work still needs to be done.

“We have to reinvigorate consumer engagement and a passion for selling with our folks,” he said. “Because along with improving the physical plant we have to have a passion for products and freshness and better serving the customer’s needs. We’re about halfway to where we want to be along that road. Changing habits and changing culture is a multiyear process.”

Hepfinger said the company was in the process of finalizing training programs designed to get employees to better engage shoppers on a personal level. Without divulging details, he said it was a “lead-by-example” model that would emphasize local leadership.

Weis remains a high-low operator but since Hepfinger took over in 2009 it has engaged in a series of extended “price freezes” that he said have helped to improve Weis’ price image and contributed to increased sales. The company also offers a gas-discount program in cooperation with Sheetz and Weis brand fuel stations. This year, Weis launched a unique loyalty initiative focused on driving increased sales from its best shoppers — and challenging its next tier of shoppers to step up. 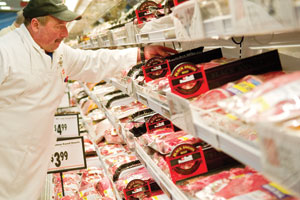 The Weis “Gold Card” program provides the chain’s top shoppers — less than 20% of its overall shoppers but responsible for more than half of its sales — with compelling coupon offers designed to increase loyalty and average spend. At the same time, the company hopes that shoppers whose spending didn’t quite reach Gold Card benefit levels spend their way toward qualifying. “Given the early returns from this program, we’re thrilled,” Hepfinger said.

“The upside is we’ve been able to test very interesting offers, some very lucrative for the consumer and extremely expensive for us,” he admitted, adding that coupon redemption among Gold shoppers was eight or nine times that of traditional coupon offers. “The great news is, at least it’s for the top 11% or 12% of your base. If you’re going to spend heavy, that’s the right place to invest. 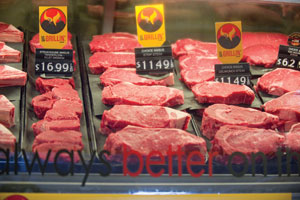 “What we’re looking at now is how we turn our silver members into gold shoppers. That’s where our next biggest opportunity will be. That group of shoppers that is marginally close — some not even that close — let’s see if we can move them up to be a Gold customer. Over the next year we’ll be piloting some offers that will inspire that behavior change.”

Hepfinger said the combination of these price and service factors will distinguish Weis in a marketplace where its competitors include Ahold’s Giant-Carlisle and Giant-Landover divisions, ShopRite, Wegmans and Wal-Mart, among others. He said he was not overly concerned with growth of discount formats like Bottom Dollar, which has moved aggressively into Pennsylvania, but rather is competing most directly with conventional stores.

“For dry grocery and private brand they can be a competitor, but our private brand is priced right there if not better, and our perishables are light years ahead of what we’d find at a Bottom Dollar,” he said. “I guess there is that  occasional consumer who is not as quality conscious who may buy some of their perishables solely on price, but that is not a product we’re willing to sell in our stores. 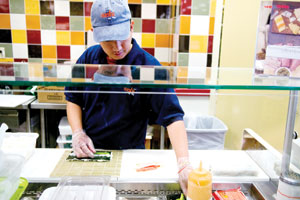 “We have invigorated our focus to do what we do well. And that’s to be a great core grocer,” he added. “We don’t have any plans at this point to do any sort of discount format and what I’ve seen out there, they’re pretty lackluster and doing little business, and not serving the community. We have plenty of market share to gain by dealing with contemporary core grocers out there.”

An expanding geographical footprint in the meantime means new competitors. While the company at press time was waiting to complete the acquisition of Genuardi’s stores from Safeway in a deal that would bring Weis closer to Philadelphia than ever before, Hepfinger wouldn’t rule out new stores or acquisitions in any direction but west of Sunbury (reaching population centers in western Pennsylvania would require a lengthy leap, he explained).

Hepfinger said the company learned a lot from the 2009 acquisition of former Giant stores in Binghamton, which will be applied as it prepares to take over the Genuardi’s stores. He described the former as a profitable deal but said a “dichotomy” emerged between Weis’ perception of what shoppers in the Binghamton market wanted and what they actually responded to. “We learned you really have to put your best foot forward,” Hepfinger said.

So the plan is to proceed cautiously with the Genuardi’s stores and to study consumers in the market before making major changes. “Getting through what’s important to today’s customer — and what isn’t — is what’s going to make us successful.”

The Bellefonte store was one of two new Weis locations that earned a silver citation from the EPA’s GreenChill program, and was built with numerous features to conserve energy and water and reduce waste.