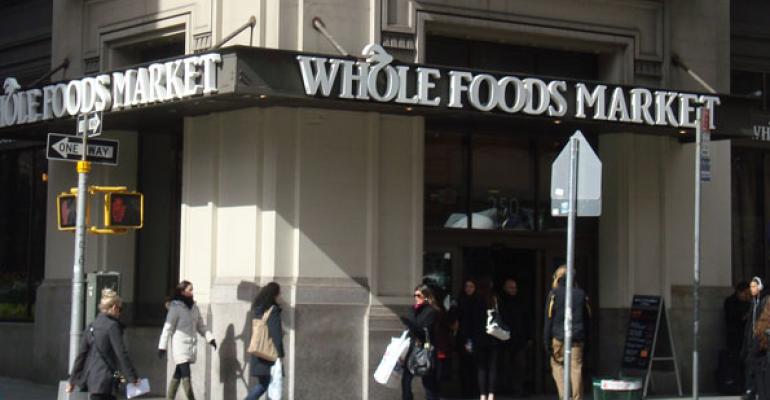 Speaking with analysts during a conference call to discuss financial results for the fiscal third quarter, which ended July 1, Jim Sud, executive vice president, growth and development, said the company has been surprised “by how well we fit into some of the smaller markets we’ve entered.

“That stems from the Wild Oats acquisition, where we acquired stores in smaller markets that we had not previously focused on. That gave us the confidence to look at these smaller markets, and we’ve been very pleased with the reception we’ve gotten.”

That success has prompted Whole Foods to sign leases for stores in places like Lincoln, Neb., and Wichita, Kan., Sud said — “markets we wouldn’t have been focused on five or six years ago but that will lead us to our goal of 1,000 stores in the U.S.”

David A. Lannon, one of two executive vice presidents, operations, said a store the company opened earlier this month in Des Moines, Iowa, “did double what we expected in the first week, and it’s truly exciting to go into all these markets where we had never gone before.”

According to Kenneth J. Meyer, the other EVP, operations, “We thought of Wilmington, Del., as a beach town, but that’s been a very solid market for us. The same with Greensboro, N.C. Those stores have opened the door for us to consider markets we once never considered.”

Net income for the 12-week quarter rose 32.1% to $116.9 million, while sales increased 13.7% to $2.7 billion and identical-store sales jumped 8%, despite the negative impact of 62 basis points from the shift of Easter to this year’s second quarter, the company pointed out.

Whole Foods said it opened a record nine new stores during the third quarter, including the relocation of its first United Kingdom store from Soho to Picadilly. The company has already opened one new store in the fourth quarter and expects to open six more before the end of the year.

“With Whole Foods operating much more efficiently, the earnings power is significant,” Scott Mushkin, an analyst with Jeffries, New York, noted. ”The only thing holding back even better performance [is] a mediocre economy.

“If macro trends improve, comps could move into double digits, akin to what took place [at Whole Foods] from 2004 to 2007,” he added.

John Heinbockel, an analyst with Guggenheim Securities, New York, said he believes Whole Foods can sustain growth without further price investments. “As long as traffic growth remains healthy, there should be little need for material price investments, and gross margin should continue to expand,” he noted.

During the conference call Robb was asked why members of Generation X have exhibited less interest in Whole Foods than baby boomers or millennials.

“It’s not that we’re lagging with Gen Xers as much as we’re doing so well with boomers and millennials,” Robb replied.

“The millennials grew up eating products their parents bought at Whole Foods, and the boomers are aging and want to stay young, healthy and vital.

“The Gen Xers may be a tougher sell because they are younger than the boomers, but unless they’re able to repeal the aging process, they will eventually come to Whole Foods.”