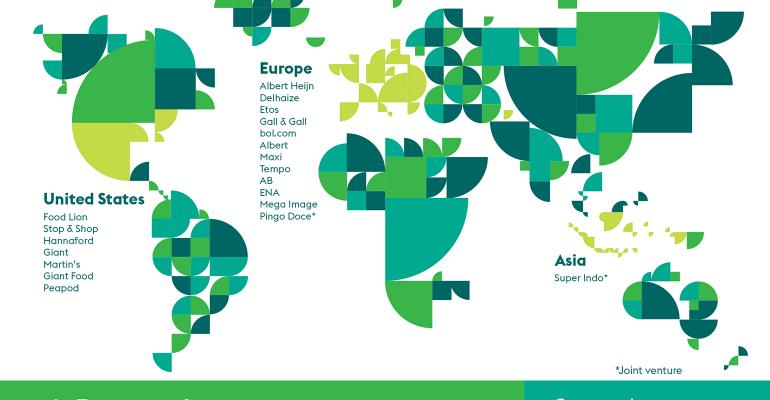 Ahold Delhaize today reported higher sales and dramatically higher earnings for its fourth quarter and year-end period. Net sales for the period were 15.8 billion euros ($19.28 billion), up 1.6% at constant exchange rates, while net income increased by 318% to 744 million euros ($909 million) at constant exchange rates, largely due to tax reforms in the United States and Belgium.

“2017 was the first full year as Ahold Delhaize, one in which we substantially completed the integration,” said Dick Boer, CEO of Ahold Delhaize, based in Zaandam, the Netherlands. “We delivered synergies ahead of schedule and continued to show underlying operating margin expansion with stable or increasing market share in our major markets.” Boer (left) noted that online consumer sales grew by more than 20% and the company continues to roll out successful customer loyalty programs.

“We are investing to make shopping more convenient, introducing new technologies to improve the customer experience and further ease the checkout process, as we live up to our promise to be a better place to shop,” he said.

The company derives the majority of its sales – 66% – from the U.S., where its Ahold USA (Stop & Shop New England, Stop & Shop New York Metro, Giant Landover, Giant Carlisle and Peapod) and Delhaize America (Food Lion and Hannaford) banners are a major presence along the Eastern Seaboard.

Ahold USA net sales were up 1.1% and same-store sales rose 0.6% during the quarter, with Ahold USA posting sales of $6.55 billion and Delhaize America of $4.34 billion.

“However, taking into account the effect of the timing of New Year and significant pharmacy deflation, food volumes were roughly flat and market share was stable in the quarter,” Jeff Carr, chief financial officer and member of the management board and executive committee, said during an earnings call this morning. “At Delhaize America, we continue to see a strong performance,” Carr (left) said. “Comparable sales grew 1.5% with price inflation at 0.7%. Volumes were positive, and we saw market-share gains at Hannaford and Food Lion where the Easy, Fresh & Affordable program continues to deliver excellent results.”

Margins at Ahold USA and Delhaize America were ahead of consensus, said Bruno Monteyne, a London-based analyst at Alliance Bernstein.

German deep-discounter Lidl, which opened its first U.S. stores this past summer, will not be as big of a threat to Ahold Delhaize as first thought, Monteyne said.

“Lidl did not mean ‘low- price food finally arriving in the U.S.,’” he wrote. “Lidl downgraded its ambitions already from 100 stores this year down to 50. Ahold Delhaize has stable or growing market share in all its territories, despite being local number-one or number-two retailer in their markets.”

During the earnings call, Boer noted that the integration of Ahold USA and Delhaize America will be in place by the end of the first quarter.

“RBS (Retail Business Services) is now fully operational providing back-office functions for all our U.S. brands and building and providing expertise, for instance in Own Brands, on digital and supply chain,” Boer said. “They have key aspects for our business where we can benefit from scale and capabilities. Setting up retail business services and strengthening the brands has been a huge task with thousands of people transferred into new roles and ultimately resulting overhead reduction.”

Boer expects the chain’s stores to be on the cutting edge of the latest technological developments.

“Our industry is changing fast, and innovative technologies are changing the way people shop,” Boer said. “For instance, frictionless payments – paying without going through a checkout – make shopping more convenient and much easier. Stop & Shop will start piloting their Scan It and Go solution in the upcoming weeks. We are adding now that you also can do your payment automatically when passed through a checkout zone without any sort of register.”

The company already has the concept up and running at one of its Albert Heijn stores in Europe, he said. In a separate Ahold Delhaize development, Belgian newspaper De Standard reported earlier this week that Frans Muller (left) is set to replace Boer as CEO as early as this week. When Ahold and Delhaize Group merged last year, Boer, who was then CEO of Ahold, became CEO of the merged company, while Muller became deputy CEO and chief integration officer.