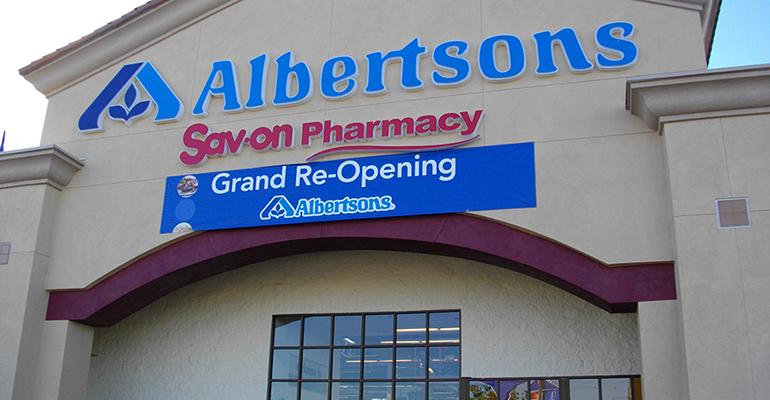 Rising identical-store sales lifted the top line in the fiscal 2019 first quarter at Albertsons Cos., which posted earnings for the period versus a prior-year net loss.

For the 16-week first quarter ended June 15, sales and other revenue edged up 0.5% to $18.74 billion from $18.65 billion for the comparable period a year ago, Albertsons said Wednesday. The Boise, Idaho-based grocery retailer attributed the gain to a 1.5% increase in identical-store sales, partially offset by sales lost from store closures during the quarter and in fiscal 2018.

Digital and e-commerce sales surged 33% year over year in the quarter, while sales penetration for private brands reached 25.3%, Albertsons noted.

Selling and administrative expenses declined to 26.2% of sales in 2019 first quarter from 26.7% a year earlier. The decrease was 50 basis points excluding fuel. Albertsons said the improvement reflects lower acquisition and integration costs from Safeway store system conversions completed during fiscal 2018, as well as progress in the company’s ongoing cost-reduction efforts.

At the bottom line, Albertsons turned in net earnings of $49 million, compared with a net loss of $17.7 million during the 2018 quarter. Sales gains, higher fuel margins and cost reductions also lifted adjusted EBITDA (earnings before interest, taxes, depreciation and amortization) to $876.8 million, or 4.7% of sales, from $815.8 million, or 4.4% of sales, a year ago, the retailer said. 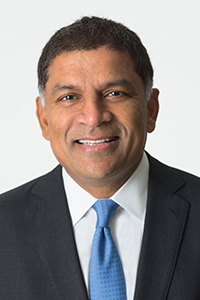 “I am pleased with the position of our business at Albertsons Cos.,” President and CEO Vivek Sankaran (left) said in a statement. "Identical sales were positive for the sixth consecutive quarter, and we continue to expand our e-commerce and digital capabilities. We are focused on our sales momentum and will continue to elevate the end-to-end customer experience as we work to create a next-generation food retailer.”

"We also continue to delever the balance sheet, which will reduce interest expense and increase financial flexibility," Sankaran added.

As of the end of the 2019 first quarter, Albertsons’ total net-debt-to-adjusted EBITDA ratio decreased to 3.3x from 3.5x at the close of its 2018 fiscal year.

Interest expense fell to $225.2 million in the 2019 first quarter from $254.6 million a year earlier, primarily due to lower average outstanding borrowings, Albertsons said. The company reported a $42.7 million loss on debt extinguishment in the 2019 quarter mainly from the write-off of debt discounts from refinancing transactions.

On June 7, subsidiaries Safeway Inc. and New Albertsons L.P. (NALP) finalized a tender offer for an aggregate of seven outstanding notes. In total, the company repurchased $437 million of par value of the notes for about $415 million in cash plus accrued and unpaid interest. Also during the 2019 first quarter, $301 million of par value of NALP notes were repurcashed for $294 million in cash and accrued and unpaid interest. The company also repurchased $253 million of NALP notes at par before the end of the quarter.

Albertsons said that, overall, it has cut the amount of outstanding Safeway and NALP notes by almost $1 billion to date in fiscal 2019.

To pay down additional debt, Albertsons said it aims to use net proceeds of about $886 million from two sale/leaseback transactions completed in the first quarter. The transactions involved 50 store properties and one distribution center.

On the expansion front, Albertsons made capital expenditures of approximately $362 million during the first quarter, including e-commerce and digital technology investments, 28 store remodels and the opening of six new stores.

“We recognize the ever-changing retail consumer and are working swiftly to adapt our business to allow customers to shop with us whenever, wherever and however they want," Sankaran said.