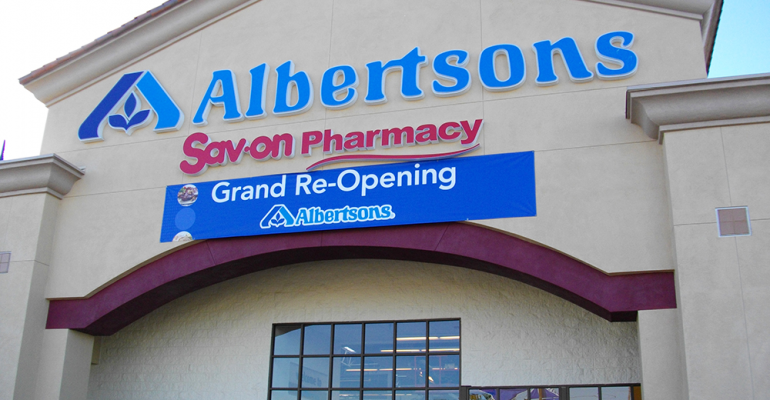 Albertsons-Rite Aid merger not without snags

Issues arise in lead-up to next week’s shareholder vote

Some bumps have surfaced for Albertsons Cos. and Rite Aid Corp. on the road to the shareholder vote on their planned merger.

Proxy advisory firms Institutional Shareholder Services (ISS) and Glass Lewis last week recommended that Rite Aid stockholders vote against the transaction, in which Albertsons would acquire the Camp Hill, Pa.-based drug chain in a cash-and-stock deal valued at about $24 billion. A special meeting for the shareholder vote is scheduled for Aug. 9.

Preceding the proxy services’ reports was a July 20 announcement by Albertsons that a law firm representing a holder of senior notes connected to its January 2015 acquisition of Safeway claims the retailer is in default.

Specifically, the law firm indicated that it represents over 45% of the outstanding principal amount of Safeway’s 7.25% Senior Debentures due in February 2031, according to Albertsons. The Boise, Idaho-based company denied the claim and said its financing structure complied with the terms of the Safeway notes. Industry observers don’t expect the matter to hold up the pending Rite Aid acquisition but didn’t discount the possibility that the issue could become a snag later on.

Meanwhile, a push by some Rite Aid stockholders to nix the merger has gained some steam, particularly after an investment management firm said it would vote its shares against the deal. They claim to have collectively mobilized 10% of Rite Aid shares, or more than 90 million, in opposition to the acquisition.

Despite acknowledging the strategic rationale for the merger, ISS and Glass Lewis said the proposed acquisition doesn’t offer Rite Aid shareholders a real premium or an equitable ownership stake in the combined company. They also raised questions about potential conflicts of interest as the deal came together, as well as whether a go-it-alone strategy by Rite Aid received enough consideration.

If the transaction is approved, Rite Aid would become a wholly owned subsidiary of new public company Albertsons Companies Inc., which would be traded on the New York Stock Exchange under the “ACI” symbol.

“Strategically, the proposed merger appears to be a step in the right direction, as it provides Rite Aid with increased scale and diversification. However, the transaction would introduce a new set of risks associated with the grocery business, and the combined company's leverage could limit investment in two evolving business environments,” ISS said in a July 27 report.

“The stand-alone case — while certainly not risk-free — appears viable given the levers available to the company, especially now that [Rite Aid] management has completed the asset sale to Walgreens Boots Alliance and can allocate renewed resources and attention to driving operational improvements. Furthermore, despite contributing a leaner portfolio of retail stores, a public listing and PBM, it does not appear that Rite Aid shareholders would receive a fair ownership interest in the combined company, a concern heightened by conflicts of interest during the negotiation process,” the proxy firm explained. “In light of these factors, a vote against this transaction is recommended under the currently proposed terms.”

In its July 24 report on the Albertsons-Rite Aid merger agreement, Glass Lewis expressed concerns that “components of the disclosed pre-execution engagement process raise significant questions around possible conflicts of interest, questionable procedural transparency and disconcertingly expedient late-stage shifts in the estimated value of ACI relative to the company.”

As a result, the transaction would lead to “at best, an at-market takeover yielding no meaningful premium to Rite Aid investors, who would hereafter hold a minority stake in a firm heavily influenced by Cerberus [Capital Management, the private equity backer of Albertsons Cos.],” the proxy advisor said.

“Under these circumstances, we fail to see that the proposed combination represents a particularly attractive outcome for unaffiliated Rite Aid shareholders, each of whom has, in our view, been offered very little reason to conclude that management has secured full value under extant market conditions or that the company would not benefit from continued implementation of its stand-alone operating strategy until a counterparty is prepared to deliver a clear and attractive value for control of Rite Aid,” Glass Lewis concluded in its review. “Accordingly, we recommend shareholders vote against this proposal.”

Rite Aid investor Chris Komatinsky, who with his family owns roughly 1.5 million Rite Aid shares, has been rallying other company stockholders to vote against the acquisition by Albertsons. They contend that the proposed deal greatly undervalues Rite Aid — especially its health care assets, led by its EnvisionRx pharmacy benefit manager — and would meld the drug chain with a supermarket company at a time when the grocery industry is under attack from a slew of traditional and emerging competitors.

Opposing shareholders also said Rite Aid stock has dropped 30% since the merger was announced, and they have objected to the Rite Aid board’s approval of retention bonuses for top executives if the deal falls through.

In late June, Highfields Capital Management said it plans to vote its approximately 47 million Rite Aid shares, or about 4.4% of the outstanding shares, against the merger with Albertsons. “The current terms of the proposed transaction between Rite Aid and Albertsons do not offer compelling value. In Highfields' estimation, the proposed transaction is in the best interests of Albertsons and Rite Aid management, but not Rite Aid shareholders,” the Boston-based investment manager stated.

After Highfields’ announcement, Komatinsky issued an open letter to Rite Aid shareholders on July 3. “Their against votes, added to the 45 to 50 million held by hundreds of individual shareholders who have expressed their against votes at the riteaidmerger.com website or to me directly by phone or e-mail, brings us to 10% vocally against the proposed merger.”

The merger has been unanimously approved by the Albertsons and Rite Aid boards, and the Hart-Scott-Rodino (HSR) waiting period expired March 28. Pending approval of Rite Aid shareholders, regulatory clearance and other customary closing conditions, the transaction is expected to close early in the second half of 2018.

Plans call for Rite Aid Chairman and CEO John Standley to become chief executive of the merged company, with current Albertsons Chairman and CEO Bob Miller serving as chairman. The company would be managed by executives from both organizations and have dual headquarters in Boise and Camp Hill.

In a letter sent to shareholders last week, Rite Aid’s management and board called the merger “the best option for Rite Aid shareholders.” The company also noted that it hasn’t received any proposals from other parties since the deal with Albertsons was announced.

“Rite Aid has worked hard to defend and improve its competitive position in the face of a range of industry headwinds, including increased competition, drug reimbursement rate pressure and market consolidation. This merger accelerates Rite Aid’s efforts to better leverage our existing competitive advantages and create new ones by transforming the business strategically and financially and providing shareholders with the opportunity to realize significant value anticipated from the combination,” Rite Aid said in the letter. “In a time of unprecedented disruption across the retail health care environment, Rite Aid and Albertsons together create a top-five food and drug retailer with improved scale, a more diversified business and a stronger market position to compete more effectively today and over the long term.”

The transaction would join the nation’s second-largest supermarket operator with its third-largest drug chain. Altogether, the company would generate pro forma revenue of about $83 billion and operate roughly 4,900 stores, 4,350 pharmacies and 320 in-store health clinics across 38 states and Washington, D.C., serving more than 40 million customers per week.

If the deal is completed, most Albertsons Cos. pharmacies would be converted to the Rite Aid banner, the retailers said. The name of the merged company is slated to be determined by the close of the transaction.