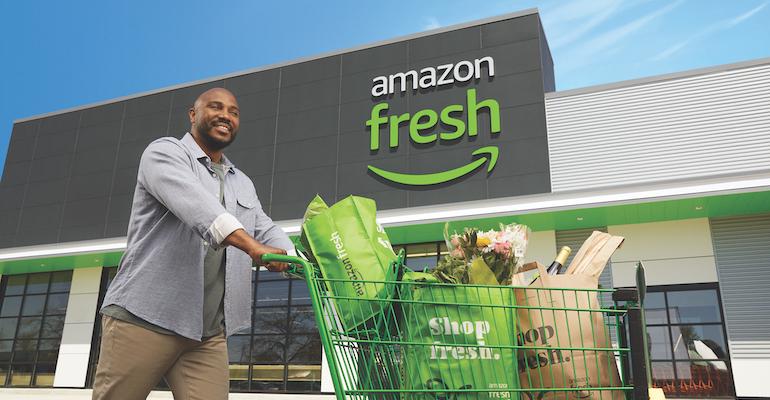 Amazon’s physical stores rang up their third-straight double-digit quarterly sales gain in the fiscal 2021 fourth quarter. Yet that news was eclipsed by an upcoming 17% fee hike for the annual Amazon Prime membership.

Online sales came in at $66.08 billion, down 0.6% from $66.45 billion in the prior-year period but up 1% excluding foreign exchange. Sequentially, online sales climbed 32.3% from the third to fourth quarters.

Amazon’s brick-and-mortar store sales, which include Whole Foods Market, grew 16.6% (about 16% excluding FX) to $4.69 billion in the fourth quarter from $4.02 billion a year ago. The uptick added to increases of 13% in the third quarter and 11% in the second quarter, which marked a rebound from a 15.5% decrease in the first quarter. 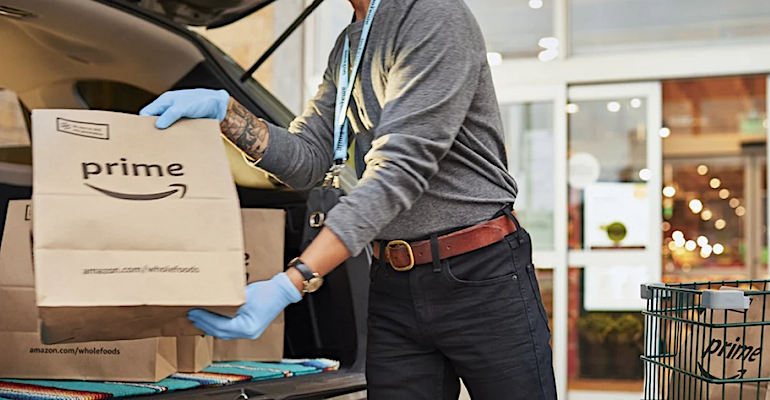 Through Prime in the U.S., Amazon now offers free same-day delivery or faster in over 110 markets for online orders of $35 or more. Whole Foods customers must pay an extra fee.

“With the continued expansion of Prime member benefits and the increased member usage that we've seen, as well as the rising wages and transportation costs, Amazon will increase the price of a Prime membership in the United States,” Amazon Chief Financial Officer Brian Olsavsky told analysts in a conference call late Thursday. 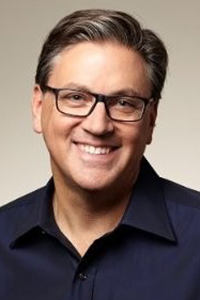 Plans call for the cost of the annual Prime customer benefits program membership to increase 16.8% from $119 to $139 and the monthly subscription to climb 15.4% from $12.99 to $14.99. The price change is effective on Feb. 18 for new Prime members and after March 25 for current Prime members on the date of their next renewal.

“We continue to make Prime better. In recent years, we’ve added more product selection, available with fast, free, unlimited shipping; more exclusive deals and discounts; and more high-quality entertainment, including TV, movies, music and books,” said Olsavsky. “Since 2018, Prime Video has tripled the number of Amazon Originals. In this September, Prime Video will also release the highly anticipated ‘The Lord of the Rings:The Rings of Power’ and become the exclusive home of Thursday Night Football, as part of an historic 11-year agreement with the National Football League.”

Through Prime in the U.S., availability of free same-day delivery (receive items on the same day ordered) has expanded from 48 metropolitan areas to more than 90, most recently with the addition of Fort Collins, Colo., and Provo, Utah. Faster same-day delivery service (receive order in as soon as five hours) is now available in 24 U.S. metro markets, including fourth-quarter launches Austin and San Antonio; Cincinnati and Cleveland; Denver; Indianapolis; Las Vegas; Salt Lake City; and San Diego.

“Items available for Prime free shipping have increased over 50%, and members have saved billions of dollars shopping on Prime Days,” Olsavsky added. “This is all on top of new program benefits like prescription savings and fast, free delivery from Amazon Pharmacy and the continually growing Amazon Music catalog for Prime members, as well as Prime Reading and Prime Gaming.”

Two-hour online grocery delivery has essentially been free for Prime members on orders of $35 or more. That came in late October 2019, when Amazon made the Amazon Fresh perishables delivery a free service under the Prime program. Then starting Oct. 25, 2021, Whole Foods online shoppers lost that Prime membership perk as Amazon instituted a $9.95 fee for delivery orders chainwide, with additional rush fees for one-hour delivery orders.

“We estimate Amazon has 140 million U.S. Prime subscribers, which means a $20 fee increase represents a $2.8 billion tailwind to net sales and operating income (assumes immaterial churn), which will build throughout 2022 as renewals increase,” Jefferies analyst Brent Thill said in a research note on Friday. “We would also note Amazon has now increased U.S. Prime subscription fees by $20 every four years since the 2014 initial increase.”

At the bottom line, Amazon posted fiscal 2021 fourth-quarter net income of $14.32 billion, or $27.75 per diluted share, compared with $7.22 billion, or $14.09 per diluted share, a year ago. Analysts, on average, had projected quarterly adjusted earnings per share (EPS) of $3.58, with estimates ranging from a 96 cents-per-share loss to earnings of $7.04 per share, according to Refinitiv.