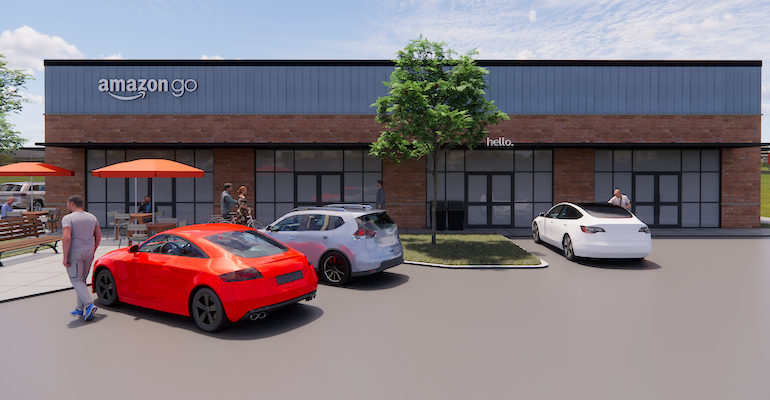 Amazon
Amazon said a 6,150-square-foot Amazon Go is due to open in Mill Creek, Wash. (rendering above), in the coming months, along with a location in metro Los Angeles.
News>Retail & Financial

Amazon has unveiled a new suburban format for its cashierless Amazon Go convenience stores, with the first two locations slated to open in the coming months.

Situated at 13209 39th Ave. SE, Suite 101, in Mill Creek, the first new-format Amazon Go will have front-of-store selling space of about 3,240 square feet. The total size of over 6,000 square feet makes the new concept much bigger than current 24 Amazon Go stores, which range from 450 to 2,700 square feet in the front end. The existing locations — in Chicago, New York, San Francisco and Seattle — also focus on high-traffic spaces in urban markets.

“Amazon Go is expanding its store portfolio to include a new store format to serve customers in suburban-area locations that are closer to their home,” Amazon said in a statement announcing the new Go concept. “The new format will offer customers a quick and convenient shopping experience to pick up grab-and-go food, snacks and beverage items, and a few everyday essentials. Customers will also have the option to choose from a full selection of beer and wine, including local favorites.”

Related: Starbucks has opened a store with Amazon Go

The new suburban Amazon Go format (rendering above) is significantly larger than the current Go outlets, which range from 1,200 to 2,700 square feet and are situated in urban markets.

Like current Amazon Go outlets, the Mill Creek and L.A. stores will have Amazon’s “Just Walk Out” technology, which enables customers to avoid waiting at the checkout line.

The system uses overhead computer-vision cameras, weight sensors and deep-learning technology to detect merchandise that shoppers take from or return to shelves and track items selected in a virtual cart. At the store’s entry gates, customers are prompted to select Just Walk Out shopping or use the traditional checkout lanes. Those choosing Just Walk Out enter the store by scanning the QR code in the Amazon mobile app, scanning their palm on the Amazon One palm signature device, or inserting a credit/debit card linked to their Amazon account. When shoppers exit the store, using the same method for entry, Just Walk Out automatically debits their Amazon account for the items they take and then sends a receipt to the app.

“The store will feature the same Just Walk Out Shopping experience customers have come to appreciate from our other Amazon Go stores. When you’re done shopping, you’re good to go. No lines, no checkout,” Amazon stated.

Though not providing details, Amazon said new product offerings also will debut at the new-format Go stores when they launch.

Earlier this month, Amazon Fresh made its debut on the dunnhumby Retailer Preference Index (RPI), ranking at No. 5 among U.S. grocery retailers on the 2022 list.

Overall, Amazon has more than 600 brick-and-mortar stores in the United States, over 500 of which are Whole Foods Market grocery stores. Besides Amazon Go and Amazon Fresh, other physical-store banners include Amazon Books, Amazon 4-Star and Amazon Pop Up. Last week, Amazon introduced Amazon Style, a new apparel store concept due to open later this year at The Americana at Brand, a retail, dining, entertainment and residential development in Glendale, Calif.