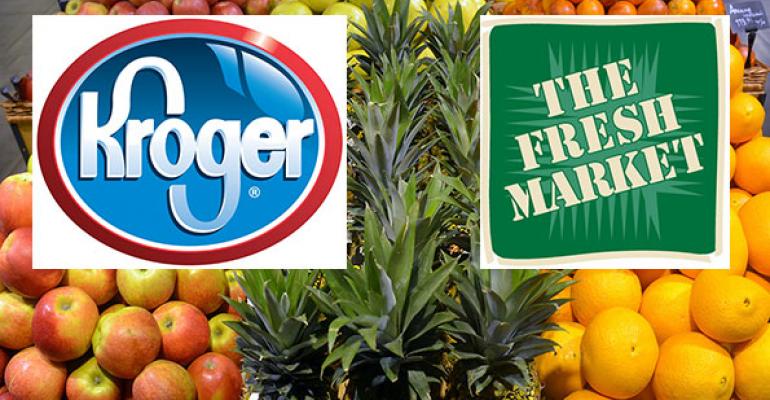 Should Kroger’s reported interest in The Fresh Market result in a deal, it would give the Cincinnati-based retailer additional ammunition as it battles for the Southeast, an opportunity to accelerate whatever plans it may have for a small-store rollout and give it yet another platform to churn sharper pricing into greater market share, industry observers told SN.

“Kroger is not fooling around,” Jay Jacobowitz, president of Brattleboro, Vt.-based natural products consultant Retail Insights, remarked of the big retailer's interest in the struggling high-end chain. “They bought Vitacost, they could certainly buy The Fresh Market.”

Kroger was among four bidders for The Fresh Market as the auction for the Greensboro, N.C.-based specialty retailer advanced into a second round, Reuters reported Thursday. The Fresh Market announced its board was reviewing strategic options late last year, but none of the parties have commented publicly on the report.

As the only strategic bidder, Kroger would be in good position to outbid private firms, according to Andrew Wolf, an analyst at BB&T Capital Markets in Boston. Reuters identified Apollo Global Management, KKR and TPG Capital as Fresh Market’s other suitors.

Wolf said he likes Kroger to prevail in the bidding because it was best-suited to address the pricing concerns at the heart of The Fresh Markets’ slowing sales. In a research note, Wolf hypothesized that Kroger could lower Fresh Market’s prices by 2% across the board simply by investing the cost synergies it would gain acquiring the chain, plus about $18 million, and still be accretive to earnings, assuming a $27 per share buyout.

“They have the expertise and the refined, nuanced tools to figure out how to leverage price investments and promotions into market share,” Wolf told SN. “And that [market share] is the problem with The Fresh Market. I think they’ve proven they can do that with Harris Teeter. That chain used to be known as Harris Gucci.”

The Fresh Market operates 183 stores, concentrated primarily in the fast-growing Southeast, where Kroger is arming for battle with Publix, Wegmans, Sprouts Farmers Market and Lidl, all expanding in the area. Significantly, Wolf noted, a deal would give Kroger 40 stores in Florida where it would encounter Publix and a fast-growing Trader Joe’s, a favorite of young shoppers.

But that too could be a factor. Food retailers including Kroger and Ahold have been experimenting with smaller, fresher focused stores including Kroger’s Main & Vine store that opened earlier this month in Washington, and Ahold’s bFresh, a store focused on Millennial foodies.

“The Fresh Market is like a bFresh for Baby Boomers, but not every location has to be,” Wolf said. “It’s a huge market with lots of room for segmentation.”