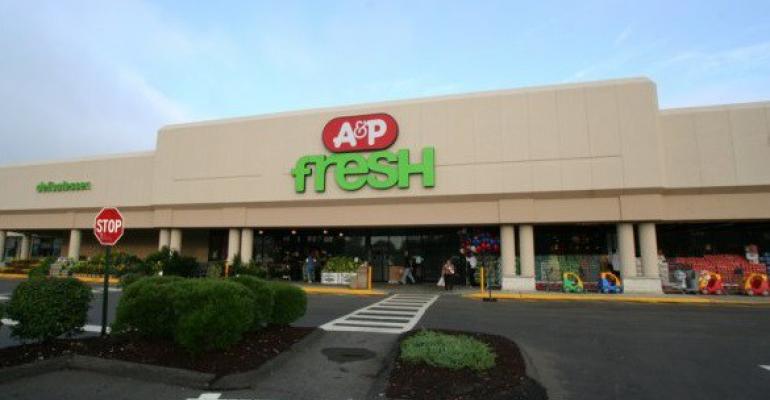 Nearly three years after entering Chapter 11 bankruptcy, and then selling and closing its stores and liquidating other assets, The Great Atlantic & Pacific Tea Co. Inc. is now gone in name as well.

The iconic supermarket company’s intellectual property assets — including its store banners and private labels — have been sold off.

Hilco Streambank, retained by A&P in October 2015 to divest its IP assets, said this week that it has completed the sale of the A&P, Waldbaum’s and Food Basics supermarket banners and has “now sold substantially all of its intellectual property assets.”

Other IP assets in the sale included the Best Cellars store banner and the Jane Parker, Via Roma and Live Better private brands.

Buyers of the IP assets and financial terms of the deals weren’t disclosed.

"We are pleased to have assisted in the sale of these intellectual property assets. Such supermarket banners, including A&P and Waldbaum's, have a long and rich history in the Northeast. We are excited to see how the new owners of these brands will continue the legacy,” Richelle Kalnit, senior vice president of New York-based Hilco, said in a statement.

Montvale, N.J.-based A&P announced the bankruptcy filing in July 2015, the second time in five years that the food and drug retailer had sought Chapter 11 protection. At the time, the company operated 297 stores under the A&P, Food Basics, Food Emporium, Pathmark, Super Fresh, Waldbaum’s and Best Cellars banners in Connecticut, New York, New Jersey, Pennsylvania, Delaware and Maryland. About half of the supermarket locations had pharmacies.

A&P’s demise marked the disappearance of one of the nation’s landmark retail companies. The Great Atlantic & Pacific Tea Com. was founded in New York City in 1859 as a seller of tea and coffee, but by 1930 it had grown into the world’s largest retailer, with nearly $3 billion in annual sales and 16,000 stores.

Update May 2, 2018: This story has been updated to reflect comments provided by Hilco.