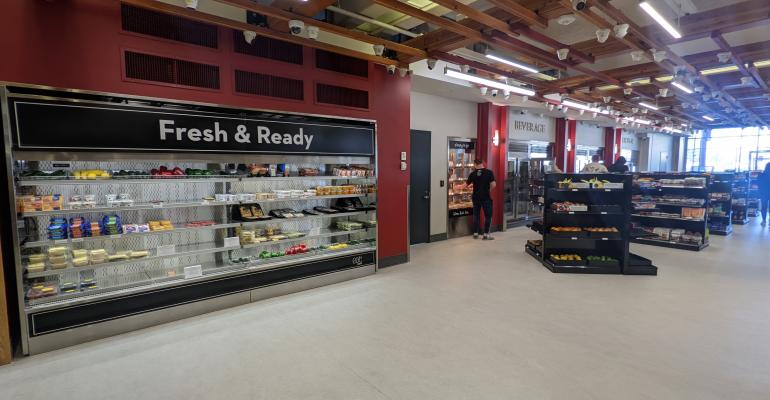 Sodexo
The stores are open 24/7 and feature fresh produce, such as onions, potatoes, apples and bananas.
News>Retail & Financial

The University of Denver replaced two traditional convenience stores with cashier-less grocery stores—the first in the nation on a university campus.

This spring, Sodexo decided to do something different with its campus convenience stores at the University of Denver.

“It is one of our pillars for Sodexo to drive innovation and bring that to our clients,” says Tad Robnett, general manager Denver dining. “This is our latest example of that.”

The stores definitely check the innovation box. One hundred fifty cameras embedded in the ceilings of each store read the movements of shoppers and the products they handle, recording prices based on the location of products. The AI is smart: if a shopper picks up a product and puts it back on the shelf, they won’t be charged—even if they put it back in the wrong spot. And it’s designed to be secure: to protect shoppers’ identities, the system does not use facial recognition technology.

The stores have been so successful that the dining team now clocks more hours behind the scenes to make popular grab-and-go meals.

To shop, a student signs onto an app that generates a unique QR code, granting entry. Once inside, the student picks up items they wish to purchase, stuffing them in a backpack or bag—or simply holding onto them. When a shopper exits, the system charges them for what they carry out of the store, generating a charge to their student account and delivering a receipt within minutes.

Sound otherworldly? For these students, it’s not. “The students…in this generation, the way they grew up, it’s a very natural thing for them,” Robnett says. 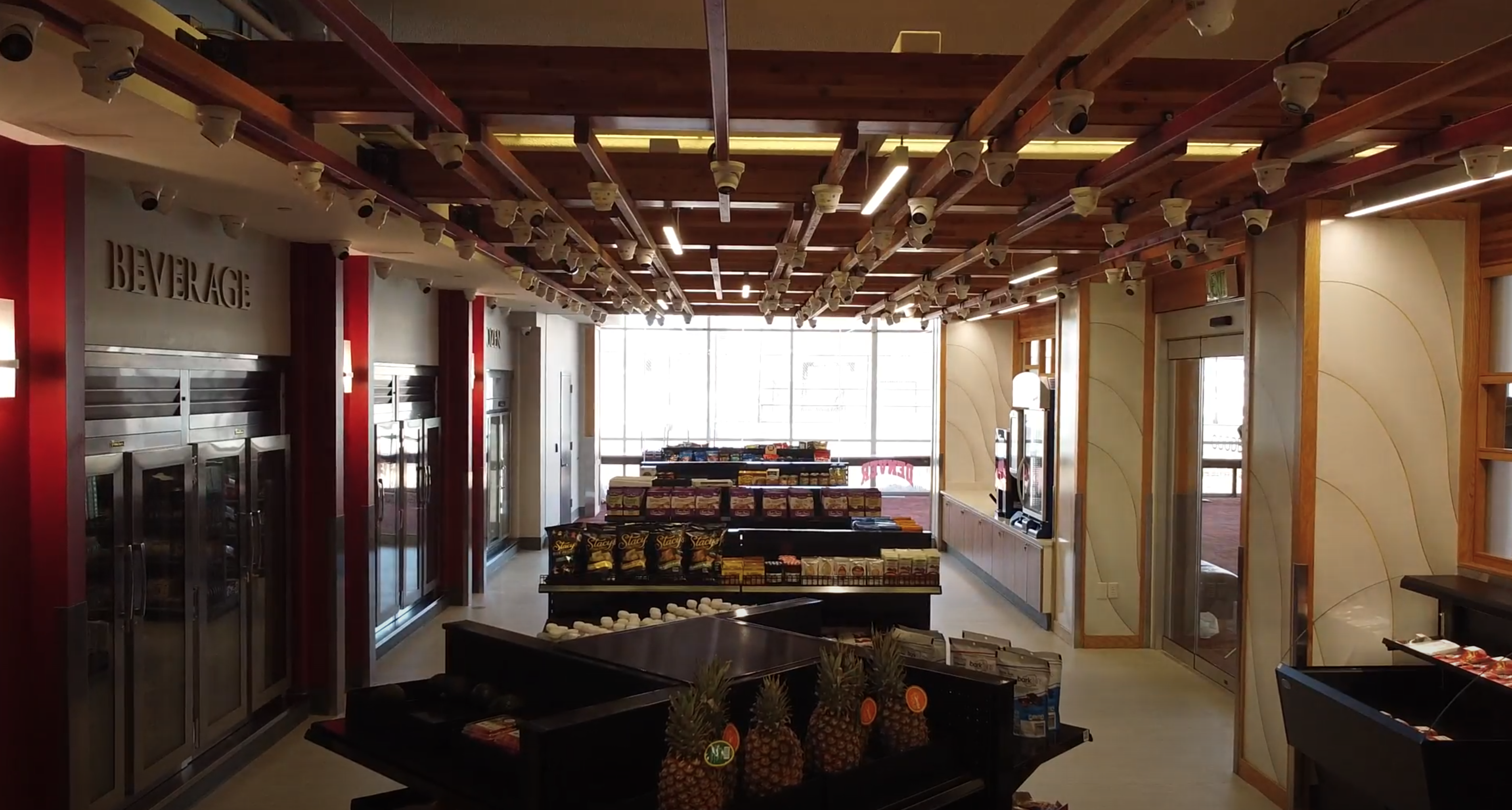 In each cashier-less store, 150 cameras embedded in the ceilings of each store read the movements of shoppers and the products they handle, recording prices based on product location.

The system needed time to adjust. At first, the number of shoppers exiting overwhelmed the system; eventually, the team learned that customers need to exit a few seconds apart to allow the system time to calculate purchases properly.

It was “pretty hectic at first,” resident district manager Tracy Williams says, adding that the company that provides the technology helped them solve issues quickly. Now the stores can handle an unlimited number of shoppers—they’ve seen up to 25 students shopping at once.

At the beginning, they needed to educate students about how to use the app. One issue in the first couple of days was “tailgating”—when a shopper walks in on the heels of the person in front of them without obtaining their own QR code. When this happens, items picked up by the tailgater end up on the first shopper’s account. (Shoppers can dispute charges.)

Though they planned to staff the front doors for two full weeks, the issue resolved itself within days when students started educating each other. “We really overestimated the time that we would need to spend there training,” Williams says.

This spring, grab-and-go items included choices such as breakfast burritos, hot Italian sandwiches and fettuccine Alfredo. (Those choices will change in the fall.) They also stocked cold to-go items, such as sandwiches, salads and parfaits. Students can pick up sushi made fresh by a campus vendor, high-end ice cream and gelatos or microwavable entrées and sides. The stores also feature made-to-order milkshake machines and automated Starbucks systems. And, of course, there are packaged snacks galore.

But the most significant—and eye-catching—change is the addition of fresh produce. Students can buy a variety of whole vegetables and fruits: potatoes, onions, carrots, apples, oranges, bananas, and more. Produce is charged by the number of items, not by weight. In addition to produce, they also stock easy-to-cook items such as dry pasta and jarred sauces.

Since the system generates charges based on the precise location of products, employees need to stock products meticulously. Each store is staffed by an employee who keeps the shelves full and who is available to troubleshoot app-related questions.

It may seem that an automated checkout system would kill jobs, but Sodexo has experienced the opposite. Each store is still staffed with a single worker whose primary responsibility merely shifted from checkouts to stock management. And because the stores have been so successful, the dining team now clocks more hours behind the scenes to make their popular grab-and-go meals. “Volume,” Robnett explains, “is driving the need to keep more staff on hand.”