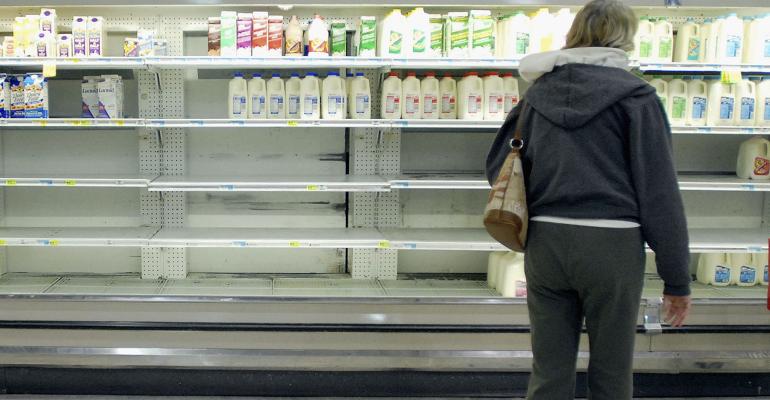 Brandi Simons/Stringer/Getty Images
Supermarket shelves can quickly empty of milk, bread and other necessities when winter weather is in the forecast.
News>Retail & Financial

Southeast snow, nationwide cold front could be a welcome blast As the first week of the new year brought more lousy news for grocery – weakening demand sinking sales in December, and pessimistic forecasts for some of the industry’s biggest stocks – it likely comes as a relief to grocery retailers that a temporary solution was literally falling from the sky by week’s end.

And while the forecast snowstorm in the Southeast U.S. was sparking what looked to be enormous spikes in grocery store traffic for the obligatory bread-and-milk runs, things were actually improving all over as a nationwide cold front is motivating shoppers to seek “need-based” items in an otherwise quiet period for shopping, said Evan Gold, EVP of global service for Planalytics, the Berwyn, Pa.-based firm that forecasts demand based on weather.

“I think this is overall good news for grocery as the entire U.S. is facing below-normal temperatures this week,” Gold said Friday morning. “We’re in a post-holiday, post-gift-giving period where people are spending only on what they need. When the weather is like this, we see needs for items like hot drinks, rock salt, wiper blades and snow shovels go up.” An Instagram photo of a busy pre-storm Kroger store in Atlanta.

Like the haircut, the snow shovel tends to be one of those purchases that can stand up to the threat of online retail. “People just don’t buy them until they absolutely need them and by then is often too late to order it online,” Gold noted. “It’s an item people wind up going to the store for.”

Gold said the grocery rush ahead of a storm tends to redistribute the pattern of traffic more than bring new customers to a store, so the opportunity for retailers in that space — in addition to managing labor and supply chains — is to grow the categories that accompany the weather.

This week, for example, Planalytics is forecasting ice melt sales up 63% vs. the same period last year; snow shovels will spike by 39%; and firelogs and hot chocolate will each see a 4% increase, nationwide. Retailers in Charlotte, N.C., can expect ice melt sales to jump by 200%. Atlanta grocery stores should see hot chocolate up by 17% this week, Gold added.

But even places like New York, where we awoke Friday to see an inch of snow had fallen overnight, should get a boost, he said. “A dusting is good because it’s not enough to keep you inside, but still enough to spark some demand.”

It’s hard to believe today, but there was a time when there was some debate about whether Wal-Mart or Kmart would win the supercenter war.

Kmart’s latest round of store closings include three casualties in its so-called “K-fresh” store test group: Roseville, Mich., Chillicoth, Ohio, and Uniontown, Pa. All of those stores were one-time Super Kmarts with full-blown grocery stores inside that were downsized in recent years to a smattering of fresh and staple items in a manner not unlike Target’s “p-fresh” stores. Liquidation sales begin Saturday.