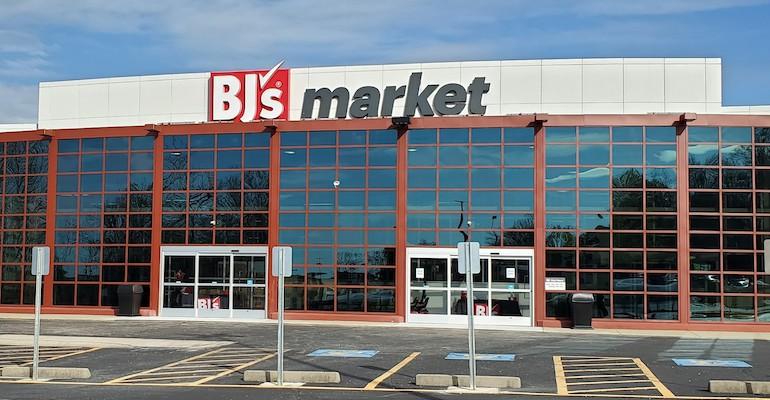 BJ's Wholesale Club
At 43,000 square feet, the BJ’s Market in Warwick, R.I., occupies about half the space of a typical BJ's warehouse club.
News>Retail & Financial

Plans call for the 43,000-square-foot BJ’s Market, located at 375 East Ave. in Warwick, to officially open on May 6, Westborough, Mass.-based BJ’s said Friday. The new retail concept is designed to provide a “convenient, efficient shopping experience,” offering a mix of top-selling fresh foods, produce, sundries and seasonal products, among other items, according to the Westborough, Mass.-based warehouse club chain.

Members will find the same pack sizes and pricing as in full BJ’s clubs, as well as the same services, such as curbside pick-up, same-day delivery and Express Pay, BJ’s noted. In addition, BJ’s Market will include testing of new product assortments, displays, product sampling and demonstrations, and convenience initiatives, the company said. The product mix, too, will feature popular national brands as well as BJ’s Wellsley Farms and Berkley & Jensen own brands.

“BJ’s Market will serve as an exciting new innovation lab for BJ’s Wholesale Club,” Bill Werner, executive vice president of strategy and development at BJ’s, said in a statement. “We are bringing the same great savings and value our members know and love, but delivering a convenient location closer to home.”

BJ's Market will serve as a retail innovation lab while offering club members a shopping experience focused on enhanced convenience.

BJ’s President and CEO Robert Eddy announced the upcoming BJ’s Market in Warwick when reporting fiscal 2021 results in early March. He noted that more compact format will serve as an innovation center and could provide a new growth avenue for the retailer’s brick-and-mortar base.

“As we look ahead at the various ways we can grow new units, we will also open a small-box pilot this year,” Eddy said in a March 3 call with analysts. “While this could become a new expansion vector for us, it will initially function as an innovation lab.”

This year, BJ’s aims to open 11 clubs, including in new markets such as Columbus, Ohio; Indianapolis; and Nashville, Tenn.; and existing markets such as Atlanta; Miami and Orlando, Fla.; Richmond, Va.; Detroit and metropolitan New York. The BJ’s Market in Warwick is part of the first expansion phase that also will include new clubs in Lady Lake, Fla.; Canton, Mich.; and Greenburgh, N.Y. Currently, BJ’s operates 227 clubs and 159 BJ’s Gas stations in 17 states.