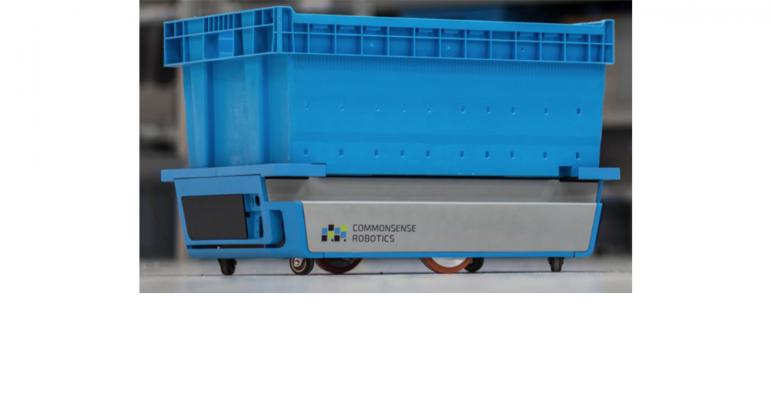 Could robots and AI make delivery affordable for stores?

Commonsense Robotics, an Israel-based company, understands all the issues grocery stores deal with when starting and sustaining a delivery program. And it believes that its technology and services can be the remedy.

“The solution is a combination of the advantages of local, in-city operations and robotics and AI,” said Ran Peled, Commonsense Robotics’ head of marketing.

The services the company provides include a micro fulfillment center and an automated packing system run by robots that get smarter over time by using artificial intelligence (AI). These fulfillment centers will operate in urban areas in basements or underutilized spaces as small as 10,000 square feet. They will be staffed by a handful of employees and a few hundred robots. And these centers could house inventory for multiple grocery stores.

As orders come in the robots will bring totes or containers of product to the employees. Delivery would be done by the grocery or third-party delivery companies.

“The people in the site really need to think very little about what they do, and all the planning of the storage and the building of the orders is all done by the computer,” said Peled.

He envisions fulfillment centers like these situated through cities. And his vision isn’t far off. The company is building one in Israel right now and has plans for four more to open in 2018, including centers in the U.S. and U.K. Peled declined to say what locations are on tap for the U.S.

As Peled sees it, this technology fixes the three major flaws common in most grocery delivery systems.

The first grocery delivery problem is the manual picking process. “The store isn't designed for very quick basket picking, and once you hit a certain scale you just have too many pickers in the store, and it detracts from the store experience for everyone else, and it costs you on labor and inefficiencies and mistakes and substitutions.” With Commonsense Robotics, the robots do the product picking.

The next issue is large fulfillment centers located outside of cities. “It's a very capital-intensive project in an industry that is starving for capital,” Peled said. And, “it's usually built on hundreds of thousands of square feet, and it cannot be built inside a city. The consumer doesn't just want groceries online – they want it fast. So, if you build [fulfillment centers] outside the city you're just going to stand in traffic.”

Finally, to deliver to customers, retailers often look to outside on-demand companies such as Instacart. “This is economical. They are pricing it in the way that the retailer makes money. And it's fast for the consumer. So, it sounds like the perfect idea, but retailers don't like to lose control of their clients.”

“Our solution is solving all of that. It's very economical,” he added. “It sits inside a city, so deliveries are very fast. And you own your consumer. We don't try to sell to your consumer.”

Peled said the Commonsense Robotics fulfillment centers will help flip the balance of power in favor of smaller grocery stores that have been struggling with delivery.

“Usually the barrier to entry for automation is very high, and we can make it as low as a few dozen orders a day,” he said. “So even if you're a local minimarket or a mom-and-pop grocery store, all you need to do it put up a website to face your clients, and at the same time ship your inventory to our facilities. We stow it for you, and every time an order comes in, we can fulfill it and dispatch it for you. But you don't need to invest millions or tens of millions of dollars in that capacity, and you don't need to have huge volumes to be able to allow and afford that because we make it very economical.”

Ultimately, Peled sees Commonsense Robotics as helping the consumer, too. “With our technology, we can make sure that they get [fresh food] as fast as pizza, and we can make sure it doesn't cost them more.”

Life after lockdown: 5 tips for retailers on planning ahead
Jun 15, 2021