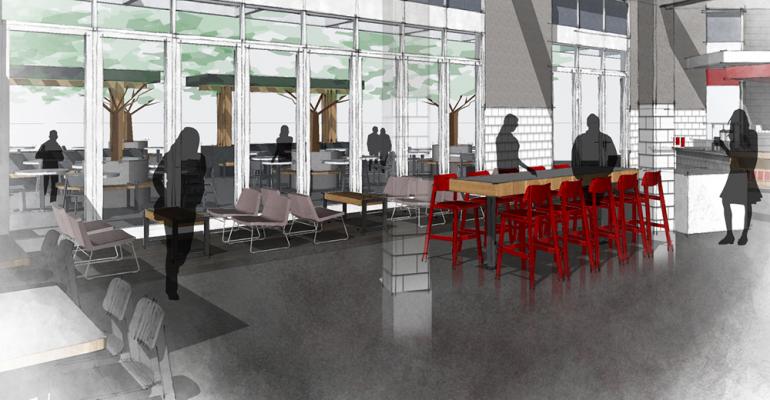 Supervalu/Fitch Design
Plans call for the new Cub store to have multiple entrances and several café-style areas for seating, both indoor and outdoor.
News>Retail & Financial

Supervalu’s Cub banner is preparing to open its first urban concept store next year in Minneapolis, a 46,000-square-foot outlet that will seek to integrate with the community in ways that are different from other Cub locations.

“The look and feel and design of this Cub store are different than anything else we have, and we feel it is quite a big step forward for the evolution of our brand,” said Anne Dament, executive VP of retail, marketing and private brands at Minneapolis-based Supervalu, in an interview with Supermarket News.

Cub stores average about 75,000 square feet, and although the company does operate some smaller-format locations, the new urban store will be the chain’s first to be located inside a residential building. The building will include 148 apartment units. 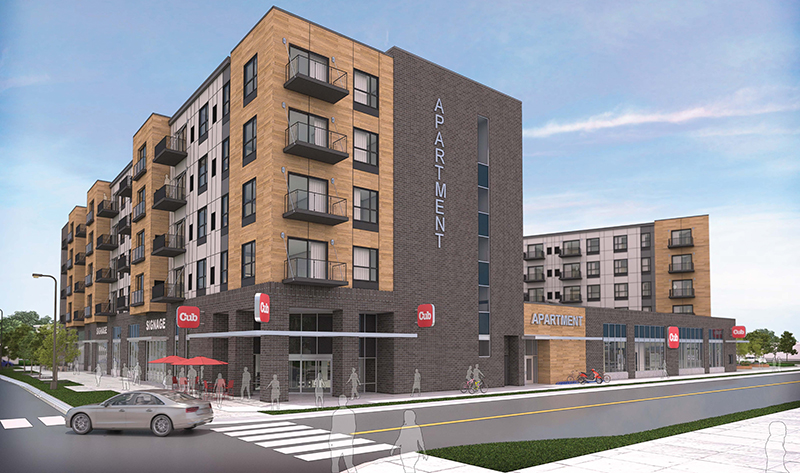 The new urban Cub store will be the chain’s first to be located inside a residential building, as seen in this rendering.

Plans call for the store to have multiple entrances and several café-style areas for seating, both indoor and outdoor. It will feature a large deli area offering Supervalu’s Quick and Easy meals as well as prepared foods made to order. It will also include a popcorn shop — a feature that has been rolled out to other Cubs in the market — a farmers’ market-style layout in the produce department, and enhanced floral gift space and a pharmacy.

The store, located near both a light-rail commuter station and the site of a planned multi-use path connected to the city’s Midtown Greenway, will include a bicycle parking area and a walk-up window offering coffee, ice cream and the chain’s signature ice cream cookie sandwiches year-round from the in-store Refresh bar.

“We are really excited about the design. We have some great space in the store that accommodates seating, where you can enjoy the space inside the store, and seating that allows you to enjoy the space from the inside looking out and the outside looking in,” said Dament. “There will be areas where people can plug in their iPhones and iPads and just relax.”

Global retail design firm Fitch Design, which has also led the chain’s remodeling efforts, designed the new store. Many of the elements that have been incorporated into those remodels will also be in the new urban Cub, Dament said, although they may be modified for the location, such as the Refresh bar with a walk-up window.

And while the store will emphasize convenience in terms of prepared foods and grab-and-go offerings, it will also offer a full shopping experience, she said.

“In this particular store we are catering to a walk-in community, basically, so we wanted to make sure we provide all of the solutions they need,” she said.

The grocery offering will be optimized for the space, Dament explained, with fewer large package sizes that are more suitable for suburban locations, for example.

“We aren’t alienating our base shop business, but we will definitely be leaning into the convenience and solutions component for our customers,” she said.

Dament described the neighborhood as an “up-and-coming” area of the city with a large population of young families and growing number of residential buildings.

She said the concept could be expanded to other locations if the right opportunity came along.

“We’re always evaluating opportunities,” Dament said. “This is our first one. We are going to test it and learn a lot I’m sure, but if an opportunity presented itself, we would absolutely consider it.”

Cub’s planned opening comes as another retailer in the market, West Des Moines, Iowa-based Hy-Vee, is adjusting its development plans for the area, which could include its smaller-format stores.

Many retailers, including Walmart and Kroger Co., have slowed their development of big-box stores as they seek to focus on the in-store experience at existing locations and weigh the growth of online shopping against the need for square footage.

Minneapolis is also home to Target Corp., which has also been rolling out smaller-format stores to urban areas and college campuses around the country.

Another Midwestern big-box retailer, Grand Rapids, Mich.-based Meijer Inc., is also planning to expand its smaller-format concepts, according to reports. Website MLive reported this week that Meijer plans to open six small-format stores by 2021, with the first previously announced location, a 40,000-square-foot outlet to be called Bridge Street Market, scheduled to open this summer. Another is slated for Detroit in 2019, the website reported.