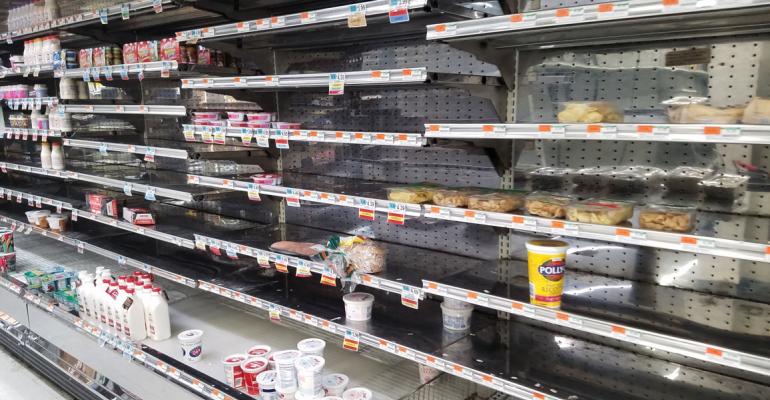 The family-owned company, which operates nine stores in Manhattan, had seen supplies trickle as a result of cash-flow problems stemming from both internal costs and a slowdown in supermarket sales affecting the entire market, James said, resulting in a slowdown of supply that by Monday had rendered shelves largely empty at some locations; and prompted at least one competitor — a Gristedes neighboring an Upper East Side location — to hang a sign welcoming D'Agostino shoppers. 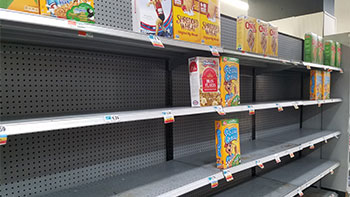 However, James said, stores are expected to begin receiving twice-weekly deliveries beginning Tuesday and he insisted the company was not for sale, nor was it pursuing reorganization under Chapter 11.

"We're a company that plans to exist for generations," James said.

D'Agostino was in a pre-payment arrangement with suppliers who include primary grocery wholesaler C&S Wholesale Grocers as well as United Natural Foods, "and we didn't have the cash," James said. "We could only buy so much."

The slowdown in deliveries has been ongoing for a little more than three weeks, James said. 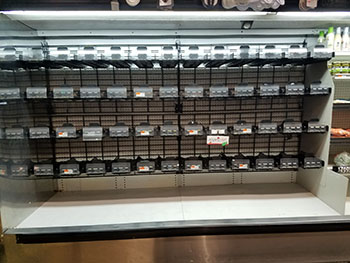 Key to the reopening the supply chain was a renegotiating with suppliers and making multiple internal changes including the way the company buys product, James said. "We've had to refine our buying practices, with a focus on things that will turn faster," he said.

D'Agostino agreed earlier this year to close two stores, and renegotiated a lease in order to keep a third one open.

"Closing stores was the hardest decision we had to make because it meant laying off employees — something that we've never done before," James said. "Previously when we've closed a store we've absorbed the employees, unfortunately that's created a bit of a problem for us on the cost side."

James, who previously worked with Ahold and A&P, joined D'Agostino as its president about a year ago. He said he presented a three-year strategic plan that has the support of creditors. "We under-promised with the intention that we'll over-deliver."

He dismissed published reports earlier this year that said the company was shopping itself. "We had discussions with Key Food about the closing locations in January, and heard from a few other groups that were interested in those locations, but those conversations were over by February," he said.

Burt P. Flickinger III, managing director of New York-based Strategic Resource Group told SN Monday he was "shocked" at the condition of stores in recent weeks and was decidedly skeptical about D'Agostono's ability to regain momentum. "D'Aagostino is a great, important name in New York food retailing, but the degree of difficulty winning shoppers back will be very high. They have a chance, but you have got to have concerns," Flickinger said.

Founded by Italian immigrant brothers in Manhattan in 1932, D'Agostino is owned today by descendant Nicholas D'Agostino II. The banner at one time was one of New York's prestigious food store brands, but has seen store count and its status decline following the arrival of competitors such as Whole Foods.