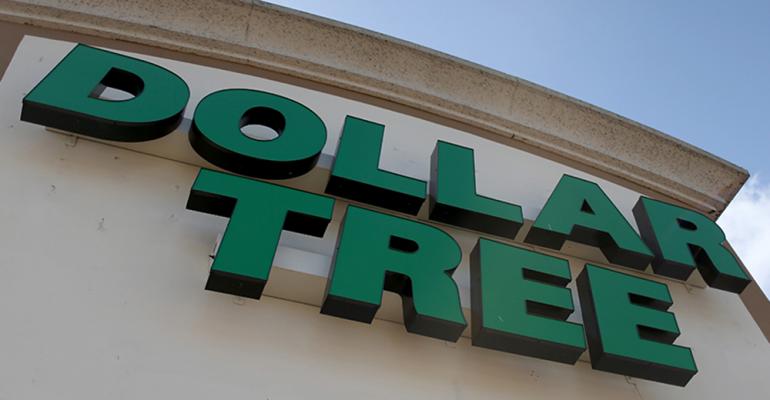 The company said same-store sales at its Dollar Tree banner rose 3.8% in the 14-week fourth quarter, which ended Feb. 3, and 1% at its Family Dollar banner. Analysts had been expecting increases of 4% and 1.5% at the two banners, respectively.

The company also projected same-store sales gains in the low single digits for the current first quarter and the full fiscal year, and projected net income for the year would be between $5.25 and $5.60 per share, lower than the $5.90 analysts had anticipated, on average, according to reports.

Kevin Wampler, chief financial officer, said in a conference call with analysts that the company expects margin pressure in the current year from increased wage costs and higher freight and diesel fuel costs.

Wampler said the company expects these costs to impact 2018 earnings by about $68 million, or 22 cents per share.

Gary Philbin, president and CEO, said the company is working on finding ways to cut costs elsewhere in its supply chain as the costs of diesel fuel and freight are increasing.

“When we hit these bumps in the road from an external force on the outside, it's all hands on deck,” he said.

Karen Short, an analyst at Barclays Capital, said in a report she also views potential ongoing price pressures from Walmart as a potential headwind.

Dollar Tree said it would invest about $100 million of the $250 million benefit it is projecting to receive from tax reform in 2018 back into the company. The investment will include allocating more labor to stores, increasing hourly wage rates, adding training and establishing paid maternity leave for eligible workers, among other benefits.

Capital expenditure plans for 2018 call for investments of $875 million to $890 million, which will include the opening of 650 new stores — 350 Dollar Tree and 300 Family Dollar locations — along with the ongoing rollout of refrigerator and freezer capacity. It is also adding adult beverages to about 700 stores.

The company also plans to renovate at least 450 Family Dollar stores, relocate or expand 100 stores and convert about 50 Family Dollar locations to Dollar Tree. It is also investing in technology, LED lighting and in warehouse capacity and automation.

During the fourth quarter the company completed 75 Family Dollar store remodels, which include better adjacencies and more productive endcaps, along with expanded beverage and snack offerings, including coolers for immediate consumption near the checkout. A total of 377 Family Dollar stores were remodeled in 2017.

“We continue to be very pleased with the initial results we are seeing in these newly renovated stores, and especially about the feedback we're receiving from our customers and store teams,” said Philbin.

Consumables sales continue to drive the business, he said. In the fourth quarter, sales of consumables were up more than 3% at Dollar Tree, and refrigerated and frozen foods were among the top-performing categories at Family Dollar.

Although the company predicted margin pressures in the year ahead, its fourth-quarter results showed improved margin performance. Gross profit for the period rose 16.3% to $2.1 billion, compared with $1.8 billion in the year-ago fourth quarter. As a percentage of sales, gross margin increased 90 basis points to 33%, which the company attributed to lower merchandise costs, markdowns and occupancy costs as a percentage of sales, partially offset by increased freight costs.

Net income in the quarter totaled $1.04 billion, which included a benefit of $583.7 million from tax reform. Sales were up 12.9% to $6.4 billion, and enterprise-wide same-store sales were up 2.5%, adjusted for Canadian currency fluctuations.