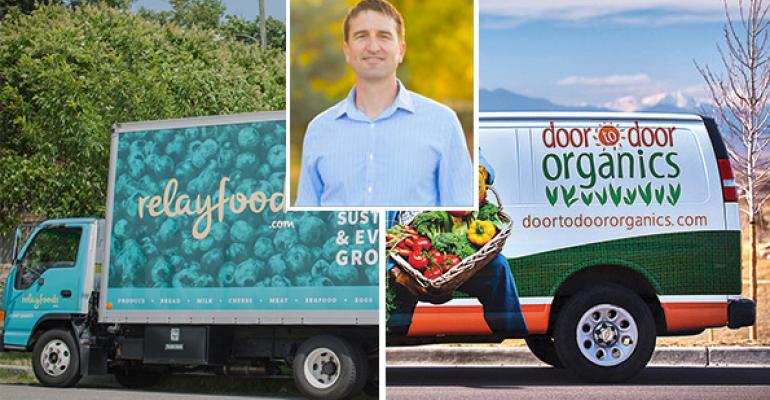 Door to Door CEO: Merger to ramp up innovation

The CEO of combined Internet grocers Door to Door Organics and Relay Foods said Wednesday that their merger will create a "best of breed" organization and a new brand to attack the growing opportunity to provide natural and organic foods for online shoppers.

"This is really about shared learnings, and ramping up our ability to innovate," Chad Arnold, Door to Door's founder and CEO, told SN in an interview Wednesday. "We'll also be able to build a broader organization with greater size and scale, and build a stronger purchasing channel."

Arnold said he would serve as CEO of the companies, which officially closed their deal June 1. Zach Buckner, Relay's former CEO, will serve as chief technology officer, and Derek Mansfield, Relay's chief merchandising officer, will serve as president.

Door to Door, based in Louisville, Colo., serves homes and businesses throughout 16 states in the West, Midwest and East Coast. Relay, founded in 2009 in Charlottesville, Va., serves shoppers in Virginia, Maryland, Washington D.C. and North Carolina.

Arnold said the merger grew from informal share group discussions between the companies that have been ongoing for several years.

"This is really just one level deeper than the loose industry dialog we'd been having," he said.

The companies also announced they had received $10 million in equity financing provided by The Arlon Group — a longtime investor in Door to Door  — and Relay's existing stockholders. Arlon is a New York-based private equity firm focused on food and agriculture.

Arnold said a new brand would be announced for the combined companies once their integration is complete later this year. He said the companies would draw on one another's strengths — citing Relay's "best in class" tech tools including an easy meal planner and its broad selection of items, with Door to Door's lean, subscription-based model providing shoppers with weekly or bi-weekly produce boxes.

Both companies, he mentioned, share similar values — both are certified B Corporations — with aspirations to provide healthy, fresh, and local foods. Each buys from more than 200 local farms.