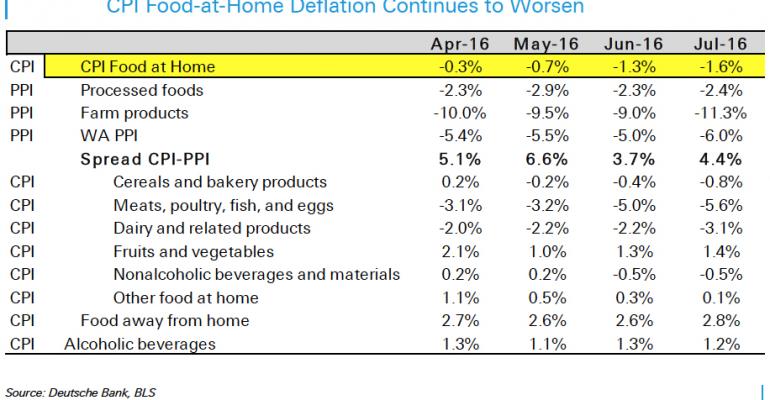 Led by an intensifying price deflation in meat, the consumer price index for food at home continued to deteriorate during July — and contrast with inflationary conditions at restaurants.

According to the Bureau of Labor Statistics, food-at-home prices declined by 1.6% overall during the month, compared with a 1.3% decrease in June — the seventh sequential decline over the last nine months, the Bureau said.

Over the last 12 months, the food-at-home index has decreased by 1.6%, with indexes for meats, poultry, fish and eggs falling 5.6% over that span. The dairy and related products index fell 3.1%, and the indexes for cereals and bakery products, and for nonalcoholic beverages, also declined.

Those figures have put increased pressure on supermarkets to raise volumes with promotions and pricing activity, analysts said — evidenced by recent actions from companies like Wal-Mart Stores and Albertsons' Jewel banner. And while some supermarket retailers like Kroger have seen margins expand due to increased tonnage as prices fall in meat, a narrowing spread between producer and consumer price indexes for the category puts increasing risk to Kroger's full-year guidance, Bill Kirk, an analyst at RBC Capital Markets, said Tuesday.

The overall food index was unchanged from June at 0.2% growth — the smallest 12-month increase since the period ending March of 2010.

By contrast, prices for food away from home increased by 0.2% during July — and have risen by 2.8% over the prior 12 months. Shane Higgins, an analyst at Deutsche Bank, said the contrasting results among food stores and restaurants could drive traffic away from restaurants and toward supermarkets.

"The gap between prices in the food away from home and food at home channels has been steadily widening for the past several months and is now at 440 [basis points] — the widest level in almost seven years," Higgins said. "As this gap persists or widens further, grocers’ relative value proposition should continue to improve, which could help drive grocery traffic."

One bright spot in the food-at-home index in the month was produce showing a 2.1% price increase. Kirk noted that figure stands to benefit produce-heavy retailers like Spouts Farmers Market, although Sprouts recently cut its full-year sales forecast citing anticipation that overall deflation would continue.